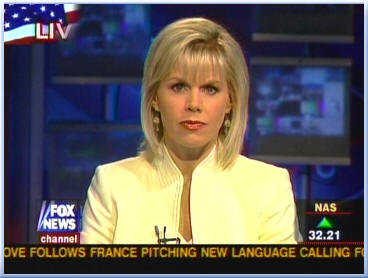 Former Miss America, Gretchen Carlson, is a good Christian who hasn’t seen a persecuted Christian she doesn’t love. Her Fox & Friends segments just ooze with love for those Christians who are being harassed by evil, secular forces. And as a good Fox partisan, Carlson is part of the right wing amen chorus that vilifies the mainstream media – particularly the NY Times. Saturday, April 3rd, she hosted Fox News Watch. Because her role as “moderator” required her to pose objective questions, that didn’t stop good Christian Gretchen from framing her questions about press coverage of the Roman Catholic sexual abuse scandal in such a way which, albeit a little more subtle than her blatant evangelizing on Fox & Friends, served to convey the requisite right wing message about how the evil, secular media, particularly the NY Times, is persecuting the Pope.

Interestingly, there has been no concern about the poor persecuted Pope on Fox & Friends. I guess Gretchen was too busy complaining about Google’s disrespect for Christians and promoting fundamentalist Christian Bible billboards! If Gretchen weren’t a Lutheran, I’d say she was hoping for an “Indulgence!”

Gretchen’s spin began with her introduction to the topic. See if you can spot the propaganda. She said, almost reverentially, that

“Pope Benedict VII is celebrating Easter St.Peter’s Basilica. During this holiest time of the year, the Roman Catholic Church is being forced to confront sex abuse scandals of the past and fierce media coverage, among them, this NY Times article…'Warned About Abuse Vatican Failed To Defrock Priest'.”

While the visual of the article was shown, she did not say the last three words of the headline:  “…Priests Who Abused Boys.”

She showed a copy of a NY Times editorial, “The Pope and the Pedophila Scandal.” She then read a statement, by Cardinal William Levada, one of Papa Razzi’s home boys, that attacked the NY Times. She then showed a copy of the awesome Maureen Dowd’s (opinion journalist) article and read the title “Should There Be An Inquisition For the Pope?” with the emphasis on the word “inquisition.” She also showed a Newsweek article “The Bad Shephard.” Gretchen’s eyes sparkled and she smiled when she asked uber right wing Christians Cal Thomas, “did the NY Times, did Newsweek, did Maureen Down, did they all go too far?”

If Carlson were really trying to be objective, she could have asked if the Vatican criticism was warranted. But, if you’re trying to reinforce the pro-Pope apologia, articulated by Levada, the words “too far” are more effective. Carlson must have been surprised, as was I, by Cal Thomas' defense of the NY Times article. He also mentioned that other writers, from other media outlets, have written about this and then cited an article by Peggy Noonan of the Wall Street Journal. The chyron read "Sex Abuse & The Church, Is Media Bias Coloring The Coverage?” But Thomas did work in the perfunctory Fox and right wing talking point that the Times is “openly hostile to everything the Catholic Church stands for.”

More pro Pope and anti-media agitprop with Carlson’s statement to Judy Miller: “So the Pope has become the media’s target.” She  continued the poor persecuted Pope meme with the question: “Is it just a coincidence that it’s during Holy Week?”

Miller compared the Vatican’s media bashing to Nixon’s bashing of the media during the Watergate scandal. She said that the media is being blamed for cases the Church should have taken care of “a long time ago.” To Carlson’s question of whether the media is biased towards the Catholic Church, Jim Pinkerton agreed. He cited an article from the NY Daily News which stated that the Pope is not at fault with the Wisconsin case. He said that “Ratzinger was nowhere near these kinds of issues until 2001." This is incorrect. The Pope, as Cardinal Ratzinger, was head of the Congregation for the Faith which dealt with issues relating to sexual abuse by priests. As noted by the AP, in a case which involved an Arizona bishop’s ongoing attempt to secure the defrocking of a sexual abusive priest, Ratzinger, in a signed letter from 1992 advised the bishop that he was taking over the case. The priest was defrocked years later. The article notes that prior to 2001, Ratzinger dictated that all abuses needed to go through the Congregation for the Faith. Pinkerton said that all the detail in the NY Times article “proved how gleeful they are." (So good, detailed reporting is "gleeful?! WTF?) He said “the worst you can say about the Catholic Church was that they were deficient in the 90’s." (Uh, the sexual abuse and coverup of sexual abuse of children, by priests, had been going on for decades). Juan Williams said that the Vatican was justified in some of its criticism of the media; but he said that as he supports the victims, he appreciates that the press is an advocate for those “who have been voiceless for so long.”

Comment: I’m not surprised that Fox News, as a mouthpiece for conservative Christians, would defend the Pope. But I find it rather distressing that they would use this hideous scandal, involving an institutional coverup of rape and torture of children, by Catholic priests, to aid and abet their campaign against the mainstream media. I suspect that if a scandal occurred in the Obama administration, they would probably accuse the MSM of not sufficiently reporting it. I also suspect that Fox "Opinion" News would be quite gleeful about it. But do they really think that objective and detailed reporting (and the situation in Wisconsin is only one of many scandals both here and internationally) on an organization that enabled predators to steal the innocence of the most vulnerable is an example of “media bias?” If so, they truly have no shame.

What’s this, what’s this? Free media commentary, that’s what. Too bad the fux at fox got the bible all wrong and the scammers at the catholic church got it all wrong too; but that is what is prophesied in the end times; false prophets and false theologies for them to follow to hell together. Got my new Jerusalem Bible today; the one with the colorful Salvador Dali prints done 1970; goodbye Richard Nixon forever!!!!