Once Upon a Time in Argentina: Mary Anastasia O’Grady’s Latest Fairy Tale 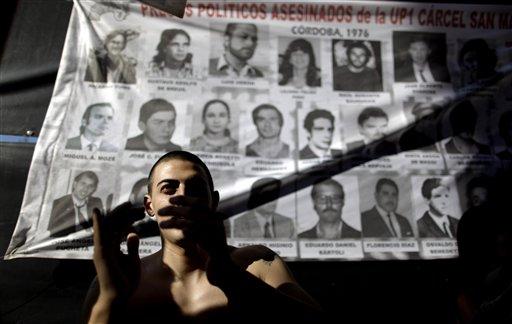 “All history was a palimpsest, scraped clean and re-inscribed exactly as often as was necessary.” – George Orwell, 1984

In her effort to whitewash the history of Argentina’s dirty war, The Wall Street Journal’s Mary Anastasia O’Grady makes up a lot of stuff. The reader need go no further than the bold lie in her lead to dismiss her so-called op-ed as right-wing propaganda.

O’Grady writes that “in Argentina today it is off limits to even mention in public the victims of the country’s left-wing terrorism of the 1970s”.

I’ve lived in Buenos Aires for the last three years and have spoken about the dirty war with Argentines from all walks of life. They are apparently unaware of the taboo O’Grady has fabricated. In fact, everyone talks about the victims of left-wing trade unions and political groups of the 1960s and 1970s. The subject is discussed ad nauseam in the ongoing human rights trials of military and police officials who carried out the state’s clandestine war against opponents. It is written about almost daily in newspapers. It is aired on television programs. Cab drivers, friends, anyone who talks about the days of the dirty war can be expected to mention the victims of O’Grady’s “band of Castro-inspired guerillas who sought to take power by terrorizing the nation”. Sympathy is sometimes expressed, but few stoop to using these victims to justify the atrocities of the military junta. There are exceptions. The dictator himself, Jorge Rafael Videla – who is serving a life sentence in prison for kidnapping, torture, murder, and trafficking in newborns – has an extremely soft spot in his heart for the victims of the guerillas. And he never fails to publicly defend his attempt to rid Argentina of the scourge.

O’Grady shares that softness and appears to resent the fact that the victims of the dictatorship are hogging more attention than they deserve. She lets the junta off gently. Rather than calling it what it was – an insidious, Nazi-headed monster whose habits included subjecting detainees to discourses by Adolf Hitler at full volume during torture sessions – she portrays the dictatorship as a kind of logical progression “precipitated by” publicity-seeking guerillas, a story – yawn – “everyone knows”.

As if there were no alternative to a ruthless, lawless dictatorship, one that robbed its victims of life, possessions, and newborns, and that found pleasure in applying electric shocks to genitalia and pushing drugged detainees out of airplanes to their death. The simplest alternative to this sort of madness requires no imagination: the application of the rule of law. It seems to work well enough for most crimes. More importantly, it is what distinguishes a state from a lawless guerilla or terrorist movement.

Just to confirm that I had not somehow gotten everything wrong I went around the corner to bounce this all off on my friend Eduardo Molteno, a small business owner who has little sympathy for left-wing causes or methods. Molteno became agitated when I mentioned the information O’Grady was peddling in The Wall Street Journal (picked up in translation right away by La Nación, the nation’s mainstream newspaper). ”Even if everything negative she says about the guerillas were true – and of course it’s not – it still wouldn’t justify the state doing what it did,” Molteno said. “If we accept what the state did, we accept the law of the jungle”.

First O’Grady lies to us. Then she lets the dictatorship off lightly. And as if that were not enough, she then blows the dirty work of the guerillas and the magnitude of their victims’ suffering out of all proportion to reality. The fact that she chooses to begin her dispatch with her own quote from Orwell is merely the ironic icing on the cake.

The “wave of carnage and destruction” that O’Grady charges “provoked chaos on a national scale” is a flight of fancy that does not jibe with history. High-profile assassinations and kidnappings of military and business targets, while awful, do not constitute terrorism of thousands of innocent bystanders. (And it is quite a stretch for O’Grady to try to classify as victims of guerilla terror minors who signed up with opposition groups.) What did constitute terrorism of the masses was a military junta run amok. Yes, some of the “subversives” were hard-core revolutionaries, but most were merely political and labor union activists, youths flexing their idealism.

O’Grady also suggests that the leaders of Argentina’s current government be tried for crimes of terrorism because they belonged to political and labor groups opposed to the nation’s military industrial complex. Since when is being a student or labor union activist against the law? And remember, the current leaders were elected, as they have been since 1983 when the dictatorship collapsed.

But about the bottom line there is no doubt, no confusion, no fudging. What is and was against the law is the state’s disappearance of an estimated 33,000 opponents. No arrests. No incarcerations. No charges. No trials. No convictions. Only a death sentence delivered by a dictatorship – god fearing, patriotic, family men with sharp noses and close cropped mustaches.

Readers of The Wall Street Journal may get what they pay for. But in O’Grady’s case it’s not the truth.