Hacking Away at News Corp.

" ... There are likely to be further prosecutions. ... Rebekah Brooks, the executive in charge of Murdoch’s U.K. newspaper operation, is now facing further scrutiny for her role. Some believe her predecessor, Les Hinton, now heading up The Wall Street Journal, will also be embroiled in the investigation. ... " 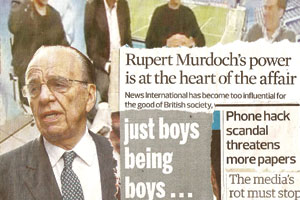 Rupert Murdoch’s News Corp. is suffering torture by a thousand cuts in Britain where a phone-hacking scandal threatens his Sunday tabloid, News of the World, with an avalanche of litigation for damages as well as possible criminal prosecutions of senior journalists and executives in the company.

In 2006, Clive Goodman, the royal correspondent of News of the World, was convicted and jailed, along with a private investigator named Glenn Mulcaire, for intercepting voice mail messages between Prince William and others. NoW’s editor, Andy Coulson, who claimed to have been unaware of their activity, resigned. A Metropolitan Police investigation concluded that there might have been a dozen or so victims of this invasion of privacy but recommended no further prosecutions.

But, according to one attorney involved in the case, Mark Lewis of law firm Taylor Hampton, 90 percent of his work today concerns phone-hacking litigation against tabloid newspapers, principally Murdoch titles. Lewis says he came upon this legal treasure trove when he was the lawyer representing the Union of Football Players and determined that numerous footballers, whose private lives are tabloid fodder, had been victims of phone hacking by journalists. Acting for Gordon Taylor, chief executive of the Professional Footballers’ Association, whose mobile phone had been hacked, Lewis obtained a settlement from NoW of £700,000 ($1,000,500).

In the process, he had applied to the court for third-party disclosure by the Metropolitan Police of all documents in their possession with regard to NoW and phone hacking. In September 2009, a police officer told Lewis in a casual conversation that there had been around 6,000 victims of phone hacking, not a dozen. This figure may have been a guess, based only on a cursory glance at the piles of paperwork released to the police by the mobile phone companies. But many reports now put the number of phone-hacking victims as high as 4,300.

Last year, investigations by the Guardian and The New York Times easily uncovered evidence from former NoW employees, who were never interviewed by the police, indicating that phone hacking was rife in the NoW newsroom and that Coulson knew what was going on. Public figures who had been previously advised by the police that their phones had not been hacked have now been told that they were victims after all.

In January, Ian Edmonson was suspended from his post as news editor of NoW while an internal investigation is being conducted into allegations that phone hacking by some NoW journalists continued until recently. The police are also investigating and have asked the prosecuting authority to re-examine all files on phone hacking. Coulson, who had sought to rehabilitate himself by becoming the chief spin doctor for David Cameron (before Cameron became U.K. prime minister), and then the prime minister’s official spokesperson and most senior media adviser, resigned from his post at the end of January because of the continued controversy.

One of the comic aspects of the entire saga is that, although the phone hacking depended on an abuse of modern technology, the complicity of NoW journalists is evident because Mulcaire, the private investigator, took the trouble to write longhand notes of every mobile phone he hacked with the first name of the journalist who had instigated the inquiry written in the top left-hand corner of every page—and because he preserved these documents. Hard drives of NoW computers are also being recovered from warehouses in East London and, some say, from as far away as India.

There are likely to be further prosecutions of a handful of NoW journalists. Rebekah Brooks, the executive in charge of Murdoch’s U.K. newspaper operation, is now facing further scrutiny for her role. Some believe her predecessor, Les Hinton, now heading up The Wall Street Journal, will also be embroiled in the investigation. As far as the potential liability to News Corp. is concerned, if one in 10 of the 4,000 or so victims were to sue, and assuming a conservative estimate of $75,000 in damages and legal costs per case, then the liability is around $30 million. Some speculate that News Corp.’s exposure would be as high as $150 million.

Coulson was the only person at NoW who claims to have been completely unaware of the paper’s phone-hacking culture. NoW’s line, meanwhile, is that the illegal phone hacking was the work of a single rogue reporter, but, if other NoW reporters turn out to be guilty, then no doubt it will be because every tabloid newspaper was doing it.