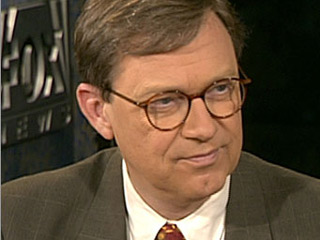 Smug, lying state propagandist Michael Barone, a "fellow at the American Enterprise Institute, was one of the corporate propagndists who attended the Koch brothers secret conclave

Earlier this week, ThinkProgress revealed documents pertaining to a secret election-planning meeting convened by the right-wing billionaires David and Charles Koch of the $120 billion dollar conglomerate Koch Industries. The Koch Meeting included powerful executives from the health insurance, coal, manufacturing, banking, and pharmaceutical industry, as well as the top lobbyist from the U.S. Chamber of Commerce, which represents large corporations like AIG and Wal-Mart.

One of the most startling revelations about the June 2010 event, as Salon’s Joe Conason noted, was the fact that conservative media stars “Krauthammer, Ponnuru, Barone, Moore and Beck were flown out to Aspen, lodged in luxury accommodations, and presumably paid a handsome honorarium by Koch to entertain and enlighten the would-be saviors of the Republic.” Conason asked, “So where are the guardians of media integrity, who made so much noise about the innocuous jawing of the liberals on Journolist?”

Not only did Koch invite many prominent right-wing media stars, he also invited supposedly objective journalists to his political strategy confab. Many of the journalists at the Koch Meeting have actually made a living for themselves accepting large sums of money from Koch Meeting participants, then parroting talking points promoting corporate control of American democracy:

– Barone’s Koch Meeting Money: Barone is a Resident Fellow at the American Enterprise Institute — a think tank/trade association well represented at the Koch Meeting — which according to its 990 tax forms, compensates fellows in the $100,000-range. Right-wing billionaire Phil Anschutz, a Koch Meeting participant, owns and subsidizes the Washington Examiner, where Barone is a paid contributor. Earlier this year, Barone was given the “Bradley Prize,” a $250,000 no-strings-attached gift just for being a loyal conservative. Several Koch Meeting businessmen are active with the Bradley Foundation, and Koch Meeting participant Dennis Kuester, a retired bank executive, helped select Barone for the gift. The Bradley Foundation, managed by former Republican National Committee counsel Michael Grebe, is endowed with nearly $500 million dollars from the wealth of deceased industrialist Harry Bradley, a proud John Birch Society member who came under fire for systematically discriminating against African Americans and women in his factories.

– Barone’s Reflexive Defense Of Koch, Secret Corporate Money: Barone enjoys wide distribution of his views through a paid punditry position at Fox News and a syndicated column through Human Events, the Washington Examiner, National Review, and other publications. And Barone has used his media platform to willingly distort ThinkProgress’ investigation of the U.S. Chamber of Commerce’s foreign fundraising, while also praising the influence of secret corporate money in the 2010 elections. Dismissing the influence of secret corporate cash (like his own), Barone scoffed at “Obamaites” for conjuring a “19th-century caricatures of fat cats.” Barone often uses his columns to mock the poor, and assists his benefactors by sliming financial and clean energy reform.

– Carney’s Reflexive Defense Of Koch, Secret Corporate Money: Carney has vigorously defended Koch’s political giving, and the right for corporations to exploit Citizens United for unlimited, undisclosed political contributions. Although he postures as an enemy of bailouts and government subsidies, Carney ignores the fact that his Koch Industries benefactors used their conservative “movement” donations to encourage the Bush Justice Department to largely dismiss $350 million in fines for leaking carcinogenic benzene, or that Koch leveraged its relationship with the Bush administration to take control of the Strategic Petroleum Reserve, or that Koch begged the Alaskan government for a bailout of one of its refineries.

– Moore’s Koch Meeting Money: Moore is subsidized through “fellowships” and “senior fellow” positions at a number of Koch-funded groups, including the Cato Institute and the Goldwater Institute, while actually leading Koch Meeting-aligned groups like the Free Enterprise Fund. In an interview with Charles Koch for the Wall Street Journal, Moore disclosed that Koch has underwritten organizations Moore is involved in, although he did not specify which ones.

– Moore’s Reflexive Defense Of Koch, Secret Corporate Money: Moore, who also serves as a pundit on CNBC and Fox News, is best known for his role as an editorial board member of the Wall Street Journal. The Wall Street Journal editorial board has been a constant defender of Koch Industries and of unlimited, secret corporate money in American elections. 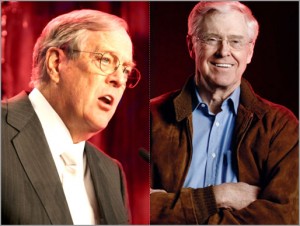 Other journalists at the meeting are also on the Koch Meeting payroll. The Washington Post’s Charles Krauthammer — who spoke at the Koch Meeting’s mountaintop dinner on “What’s Ahead for America?” — is also a recipient of the $250,000 Bradley Prize gift and sits on the board of other groups funded by the Koch Meeting network.

While no one outside the 9/12 “movement” views hate-talker and Koch Meeting participant Glenn Beck as a serious journalist, will the media scrutinize the ties of Barone, Moore, or Carney to their corporate benefactors?