Concocted Evidence: Briton Jailed for Daniel Pearl’s Murder is ‘Likely to be Freed’ 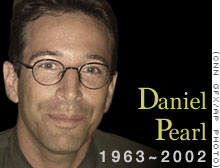 A new investigation into the death of the American journalist Daniel Pearl says that the British jihadist jailed for his murder is likely to be released because Pakistani officials used tainted evidence. The report, by a collective of American investigative journalists, asserts that Pakistani prosecutors knowingly used perjured evidence to suggest that Omar Saeed Sheikh and three other men were in the room where the Wall Street Journal reporter was killed in 2002.

American officials have found evidence based on "vein analysis" that the killing was carried out by the self-confessed 9/11 mastermind, Khalid Sheikh Muhammad, who is in Guantánamo Bay. Muhammad confessed to the murder in 2007, but lawyers said his testimony was tainted by torture and he has not been charged.

But the report author Asra Nomani said there was little doubt that Sheikh, now 37 and facing a death sentence, was behind Pearl's initial kidnapping. "He was the mastermind behind it and should be held responsible for that," she said.

Sheikh's appeal has been pending for nine years in Pakistan and shows no sign of taking place soon. There have been repeated reports that, thanks to his connections with Pakistan's ISI spy agency, he enjoys privileged conditions in jail.

Those rumours also appeared to have reached US officials, who have repeatedly expressed concern that Sheikh could be released, according to the WikiLeaks state department cables. In 2009 the US ambassador, Anne Patterson, officially requested that Pakistan transfer Sheikh to the US. In the meantime she requested "written assurances that Sheikh will remain in custody throughout the appeals process". The foreign ministry official Sohail Khan replied that Sheikh's case was a "sensitive issue".

In 2006 the previous US ambassador, Ryan Crocket, also expressed concern that Sheikh could be freed. The Pakistani interior minister, Aftab Sherpao, said he was "confident that the Pakistani conviction would hold and that Sheikh would be executed as sentenced".

The Pearl Project, compiled by Nomani and 32 students at a Washington journalism college, gives the most comprehensive account yet of Pearl's kidnapping and death. It describes a sprawling operation characterised by bungling and confusion, involving at least three militant groups. It also traces the hapless efforts of Pakistani authorities to find and prosecute the culprits. Pearl was initially abducted by Pakistani militants commanded by Sheikh, it says, but he quickly passed into the hands of al-Qaida operatives led by Muhammad.

CIA and FBI officials confirmed that Muhammad killed Pearl, the report says, by matching veins on his hands with those of the figure in the murder video. The beheading was taped by his nephew, Ali Abdul Aziz Ali, who became so nervous that he botched the filming and had to stage it a second time.

Ali, also known as Ammar al-Baluchi, came to public attention last year when it emerged that he subsequently married Aafia Siddiqui, a Pakistani mother-of-three convicted of attempting to kill American soldiers in Afghanistan.

Siddiqui is currently appealing against her 86-year sentence; Ali is awaiting trial in Guantánamo Bay alongside his uncle, Muhammad. Siddiqui's family deny the two were ever married.

Pearl's widow, Mariane, who gave birth to his child months after his death, declined to comment yesterday. "I am not ready … yet," she emailed the Guardian. Her account of the kidnapping was dramatised in the 2007 Hollywood movie A Mighty Heart starring Angelina Jolie.

Sheikh was educated at the same London school as the film-maker Peter Greenaway and attended Aitchison School in Lahore, often dubbed the "Eton of Pakistan".

The former president Pervez Musharraf claimed he was recruited by British intelligence while studying at the London School of Economics, and was sent to the Balkans on an operation. "At some point, he probably became a rogue or double agent," Musharraf wrote in his autobiography In the Line of Fire.

Other reports have suggested that Sheikh also worked for Pakistan's ISI, which reportedly assisted with his legal fees after he was charged with kidnapping four British and American tourists in India in 1994.

Of the 27 people involved in the kidnapping, four have been convicted, four are in suspected ISI detention, five have died and 14 are still free, Nomani said.