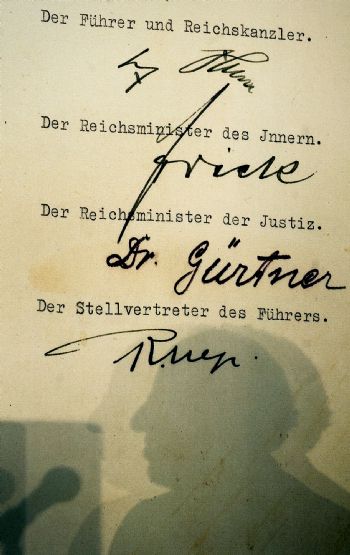 The announcement that the Huntington Library has given its copy of the Nuremberg Laws personally signed by Adolf Hitler to the National Archives raises some interesting questions.

Recall that this document was taken by General George Patton, who was a notorious antisemite, as part of his personal war booty and given to the Huntington Library, which at the time shared his sentiments regarding Jews, where it was stored in a safe for decades and unavailable to the public. Peculiarly, it was not even noted among its archival holdings.

A word of history: Two laws promulgated at the annual Nazi party rally in Nuremberg on September 15, 1935—the Law for the Protection of German Blood and the Reich Citizenship Law—became the centerpiece of Hitler’s anti-Jewish legislation. Those laws, which were soon known throughout the world as the Nuremberg Laws – not to be confused with the post-war Nuremberg Trials—restricted citizenship in the Reich to those of “German or kindred blood.” Only citizens, racial Germans, were entitled to civil and political rights. Jews were merely subjects of the state. In order to “protect German blood and honor,” the marriage of Jews and “citizens of German or related blood” was forbidden. So too were sexual relations between Jews and Aryans. Women under the age of 45 could not work in Jewish households. Jews could not fly the German flag. Categorization had consequences. Definition was the first step toward destruction. Patton took Hitler’s personal signed copy of the Laws, which he found in Hitler’s Munich apartment and for almost three scores years the public did not know that such a document existed.

To the credit of the current staff once the copy was discovered the Huntington lent it to the Skiball Cultural Center, which promptly put it on display. It was shown at the entrance to their small but ever so moving memorial to the Holocaust 6 photographs of Jews who were killed in the Holocaust with a stark inscription “6 of 6 Million.” The Skirball exhibited it adjacent to a mandatory “Emergency Exit” sign, perhaps without quite being aware of the irony: unless Jews found an emergency exit from Europe, they became part of the Six Million, murdered during the Holocaust.

Still questions must be asked:

Why did the Huntington gift this historic document to the National Archives and not maintain it on display at the Skirball?

Why did it not give it to the United States Holocaust Memorial Museum, the American national memorial institution dedicated to the victims of the Holocaust?

Why did it not give it to museum dedicated to the Holocaust such as the Los Angeles based Museum or Tolerance, or even to Yad Vashem, the Jewish National Memorial to the Holocaust.

Mind you, in a sense this document is coming home. Patton took the Nuremberg Laws either illegally or inappropriately. All such documents captured by the US military at the end of World War II should have been turned over the Army War Records which are now stored in the National Archives .By giving it over to the National Archives, the Huntington is reuniting the signed copy of the Nuremberg Laws with millions of other documents captured by the US Army in after the defeat of Nazi Germany. Yet the National Archives will not display this document as any of these other institutions would most certainly have. It will be buried among their collections rather than be seen by the public.

I suspect that the United States Holocaust Memorial Museum will – most certainly it should – request the document on loan for display in the Museum as part of its exhibition on the Nuremberg Laws, but still one wonders why the leaders of the Huntington gave it to the Archives and not a Holocaust institution.