Long-Suppressed By The U.S. Government, This Nuremberg Trials Documentary is Finally Being Shown Outside Germany - The Constantine Report
0 SHARES

Media » Long-Suppressed By The U.S. Government, This Nuremberg Trials Documentary is Finally Being Shown Outside Germany

Long-Suppressed By The U.S. Government, This Nuremberg Trials Documentary is Finally Being Shown Outside Germany 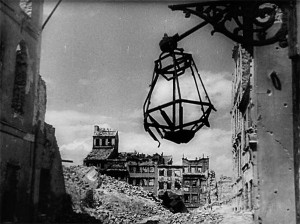 A long-suppressed American documentary about the post-World War II Nuremberg war  crimes trials has finally been shown for the first time in the UK at a  screening in Parliament, the Guardian reports.

'Nuremberg: Its Lesson For  Today' was completed by the U.S. Department of War in 1948, but was  never released in any of the former Allied countries because of the Cold War.  Authorities believed that the film would stir up a dislike for Germany at a time  when West Germany was an important partner in the fight against communism.

There were also some in the U.S. military who were concerned the trial  would be construed abroad as biased 'victor's justice'. So the erstwhile U.S.  Army Secretary, Kenneth Royall, vetoed its domestic release. The  film was eventually shown only in Germany as part of the postwar  de-Nazification.

The 78-minute film records the courtroom scenes from the trials of 22 of the  most senior surviving Nazi officials, who were accused of the destruction of  peace in Europe. The documentary also includes vignettes from captured Nazi  newsreels -- which recorded the working of the gas chambers in  concentration camps, and the ill-treatment and massacre of prisoners  -- that were shown as prosecution evidence at the trials.

The documentary was restored by Sandra Schulberg, whose father, a  former U.S. marine sergeant, filmed the scenes and wrote the  script. "I made very few changes to the  narration," she said at the premiere.

Attorney General Dominic Grieve, who introduced the first British showing,  said the trial had been "a defining moment in international justice,  establishing principles still in use today," The  Jewish Chronicle reports.

Eleven Nazis, including the notorious Hermann Goering, were convicted and  condemned to hang. However, Goering managed to commit suicide a few hours before  his execution. Three Nazi officials were acquitted through the trial, which  lasted all of ten-and-a-half months.

Watch a preview of the film here:

Crime and Medicine in "The Nazi and the Psychiatrist"

U.S. Must Learn from Nazi Doctor, says Association of American Physicians and Surgeons

Censorship: Nuremberg Film Suppressed by the OSS & War Dept. to Premiere in Toronto

IG Farben and the Holocaust