" ... Patton at the end of World War II disparaged the Jewish inmates of Hitler's death camps who had been re-interned in Displaced Person (DP) camps maintained by the U.S. Army in the Allied Zone of Occupation. He also expressed the injudicious opinion that the United States fought the wrong enemy, meaning that he would rather have had the country allied with Hitler's Germany for a fight against Stalin's Soviet Union. ... "

The Dark Side of George S. Patton (Excerpt)

His Diaries and Official Actions Reveal that the General was Deeply Anti-Semitic
By JON C. HOPWOOD 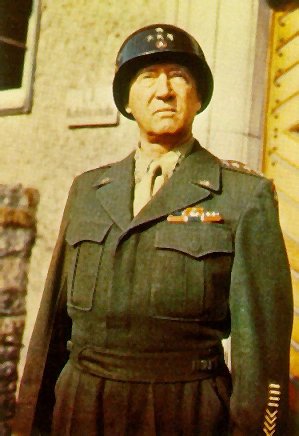 ... A reading of his grandson Robert H. Patton's family memoir, The Pattons: A Personal History of an American Family (Crown, 1994) reveals that George S. Patton, Jr. ... likely was dyslexic and suffered from bipolar disorder. This created a sense of inferiority in the young Patton and engendered emotional instability. He was not a good student and had to be tutored to read, a skill that came late to him. His mood swings were prodigious, and during the interwar period of 1918-1941, Patton was hellish to live with for his wife and children as he lusted for combat.

As a cavalry major, Patton has to share the ignominy of putting down the Bonus March in Washington in 1932 along with his superiors, Army Chief of Staff General Douglas MacArthur and MacArthur's aide-de-camp, Major Dwight David Eisenhower, a friend of Patton's. The pompous and egotistical Patton, who had redesigned the U.S. Army cavalry saber based on European designs, twice rushed the crowd of unarmed veterans and their wives and children at the head of his mounted horse. The U.S. Army's cavalry force was still bifurcated into horse and armor, with horse cavalry enjoying a higher status. Tanks also were on hand to quash the crowd, who had come to the District in the depths of the Great Depression to lobby Congress for an immediate payment of the World War I bonus promised to veterans of the "Great War".

Part of the crowd targeted in the second charge included former private Joe Angelo, who served as Patton's orderly during World War I. The veteran won the Distinguished Service Cross for saving Patton's life during the war.

MacArthur, and Patton himself, believed that the veterans were "Reds" -- communists. This must be understood in the context of the times, best encapsulated by the philosophy of one of John Steinbeck's characters: "A communist is somebody who wants 25 cents an hour when we're paying 15." That MacArthur's won intelligence service estimated that only three of 26 leaders were communists didn't deter MacArthur from labeling the March as a communist conspiracy to overthrow the government.

"Pacifism and its bedfellow communism are all around us," MacArthur declared about his fellow World War I vets. Patton, an anti-communist, shared MacArthur's distaste for "Reds". With a penchant for pre-battle speeches, Patton counseled his troops, "If you must fire do a good job -- a few casualties become martyrs, a large number an object lesson. ... When a mob starts to move keep it on the run. ...Use a bayonet to encourage its retreat. If they are running, a few good wounds in the buttocks will encourage them. If they resist, they must be killed."

In World War II, Patton would encourage his troops to take no prisoners and to murder surrendering enemy troops in cold blood. MacArthur was ordered by President Herbert Hoover to allow the Bonus Army to retreat, as he didn't want any violence. ...

General George S. Patton's diaries, which were published after his death, reveal that Patton was an anti-Semite, and not just akin to the garden-variety, country club anti-Semite that was common in America up to and through the Second World War. According to
Leonard Dinnerstein in his book Antisemitism in America, (Oxford Univ. Press, 1995) Patton would not allow Jewish chaplains at his headquarters. (p.139). In light of the fact that the U.S. was engaged in unconditional warfare with the genocidal Nazi regime that had singled out "World Jewry" for liquidation, and the fact that as a commander of a corps and later an army, Patton had many Jewish soldiers, including staff officers, under his command, such as refusal is unconscionable. Raised in a family with a pronounced belief in the paranormal, Patton was one of those WASPs who believed in the superiority of the "Nordic" race, which was encapsulated in the theory of the "Aryan" by Madame Blavatsky of Theosophy fame. The concept heavily influenced Herr Hitler.

To underscore the absurdity of such thinking, the Nordic race as Patton envisioned it did not include the Irish, even though he himself was descended from the Scots, another Celtic race which is genetically indistinguishable from the Irish, as the tribes who settled Scotland emigrated there from Ireland! Semites, and particularly Jews, were beyond the pale to Patton, whose family emigrated from Scotland to the Southeastern United States and fought in both the War of Independence and the War Between the States, taking a rebel stand in both wars. Patton at the end of World War II disparaged the Jewish inmates of Hitler's death camps who had been re-interned in Displaced Person (DP) camps maintained by the U.S. Army in the Allied Zone of Occupation. He also expressed the injudicious opinion that the United States fought the wrong enemy, meaning that he would rather have had the country allied with Hitler's Germany for a fight against Stalin's Soviet Union. It was a common sentiment among reactionaries and isolationists before the War. That Patton would dare express such political sentiments underscores emotional instability. ...