A local writer and friend of mine, Jack El-Hai (“The Lobotomist”), has written a chilling article for the January issue of Scientific American Mind about the relationship between Adolf Hitler’s deputy, Hermann Goering, and a young American military psychiatrist, Douglas M. Kelley.

Kelley spent much of the second half of 1945 meeting with Goering in his Nuremberg prison cell. His official job was to determine if Goering was mentally fit to stand trial for war crimes. But Kelly had a deeper purpose as well: He wanted to decipher the mind and motivations of one of the 20th century’s most notorious criminals. “[T]he near destruction of modern culture will have gone for naught if we do not draw the right conclusions about the forces that produced such chaos,” he wrote. “We must learn the why of the Nazi success to we can take steps to prevent the recurrence of such evil.”

El-Hai received unprecedented access to Kelley’s personal papers, and he uncovered several fascinating details about Goering’s final months. They include how Kelley played on the German’s enormous vanity to end his long-time addiction to paracodeine and how Goering asked Kelley to adopt his young daughter and raise her in the States if anything should happen to his wife. (How Kelley responded to this request remains unknown, El-Hai reports.) 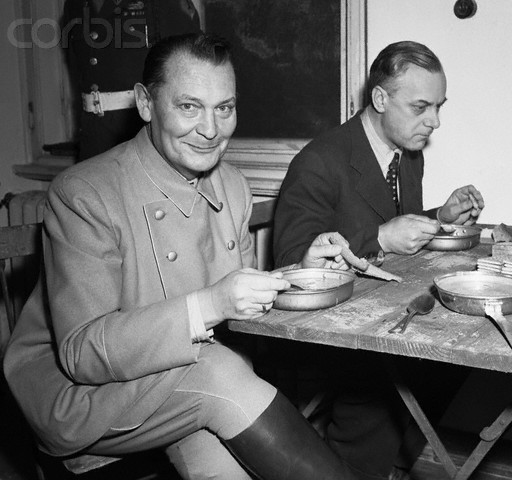 To evaluate Goering’s mental state, Kelley primarily used the now mostly discredited but then very popular Rorschach inkblot test. Here are his findings and conclusions, as described by El-Hai:

Kelley further noted that the prisoner was “cynical and filled with a mystic fatalism,” which explained why he would not take responsibility for such wartime conduct as his murder of political opponents and complicity in genocide. In his initial neurological and psychiatric report on Goering (a record hidden among Kelley’s personal papers for the past 65 years), the psychiatrist observed Goering’s emotional volatility and narcissistic fixation on what the prisoner perceived as the beauty and strength of his body. …

More forbiddingly, Kelley learned that Goering displayed a terrible flip side to the charm and eloquence he showed on first impression. … After Goering matter-of-factly recounted the murder of a close associate that he had once set into motion, Kelley asked how he could bring himself to demand his old friend be killed. “Goering stopped talking and stared at me, puzzled, as if I were not quite bright,” Kelley recalled. “Then he shrugged his great shoulders, turned up his palms and said slowly in simple one-syllable words: ‘But he was in my way. …’”

Kelley found Goering’s results surprising, given the wartime propaganda that the Nazi leaders had to be madmen. Goering’s responses to the Rorschach images demonstrated “normal basic personality,” Kelley wrote, although they also revealed “marked egocentricity and powerful emotional drives.” They showed nothing seriously wrong with Goering’s mind. Nevertheless, Kelley considered the test results a good first step toward gaining insight into Goering’s thinking. He used intelligence testing to assign Goering an IQ of 138, third highest among the incarcerated Nazis. (This score delighted the vain Goering.)

Professionally, Kelley proclaimed Goering legally sane and fit for trial. Privately, Kelley declared that Goering "was undoubtedly the most ruthless human being that I have ever experienced."

"[Kelley] believed that Goering and his cohorts were commonplace people and that their personalities 'could be duplicated in any country of the world today,' " writes El-Hai. "In the years before and during World War II, the opportunity to obtain power led them to embrace a chilling political philosophy. In other words, the Holocaust and the war's other heinous crimes were the products of healthy minds."

Goering died in 1946 after swallowing a cyanide pill the night before his scheduled hanging. The tragic specifics of how Kelley died 12 years later add a movie-like ending to the story, but I won’t give that away here.

El-Hai’s article is available in full on the Scientific American Mind site. You can also listen to his discussion of the article with Minnesota Public Radio’s Midmorning host, Kerri Miller, which was recorded earlier this week.

Original headline: "A Nazi war criminal, a U.S. psychiatrist and the commonplace nature of evil"