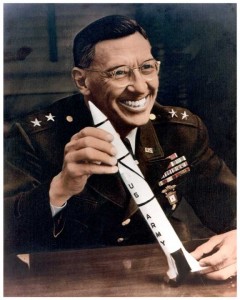 Holger N. Toftoy, a leader in the early Redstone Arsenal missile programs instrumental in bringing the Nazi Von Braun team from Germany after the war.

" ... The Army deserves credit for launching the space program. General officers like John Medaris and Holger Toftoy were among von Braun’s mentors. Buckbee described ... Toftoy as 'a strategist who came up with the idea of Operation Paperclip (the program used to recruit the German scientists for employment by the United States in the aftermath of World War II).' ... "

This was like a base realignment and closure move – only it all happened within the confines of Redstone Arsenal. Fifty years ago, on July 1, 1960, the Army formally lost its space-related missions. Some 4,700 civilian employees, including the von Braun team, and $100 million worth of buildings and equipment at Redstone Arsenal and Cape Canaveral were transferred to the newly created National Aeronautics and Space Administration.

“This was the equivalent of a BRAC because you’re moving stuff,” Mike Baker, command historian for the Aviation and Missile Command, said. “As a lesson for today, that transition happened and everything kept moving forward. This community is used to change.”

The Army built the foundation for the space program. From Jan. 31, 1958 to July 1, 1960, the Army had a series of pioneering efforts in space. During the 30 months from the successful launch of Explorer I to the formal transfer ceremony which officially opened the George C. Marshall Space Flight Center, the Army did the following: placed four Earth satellites into orbit; launched the Free World’s first lunar probe and first solar satellite; launched three primates into space, two of which were recovered alive; initiated an effort on a 1.5-million-pound-thrust booster being designed for a lunar exploration vehicle; and began work on the launch vehicle which would carry the first men into space.

“Before Marshall was started, we the Army had put the first satellite up, Explorer I,” Baker said. “Early work on the Saturn, people don’t really know, was started by the Army.”

The transfer of 4,700 people and $100 million in buildings and equipment to NASA represents “probably about three-quarters of a billion in today’s dollars,” Baker said. “That’s a pretty massive effort going on. The Army here essentially had to rebuild in that we still had a mission to do.” 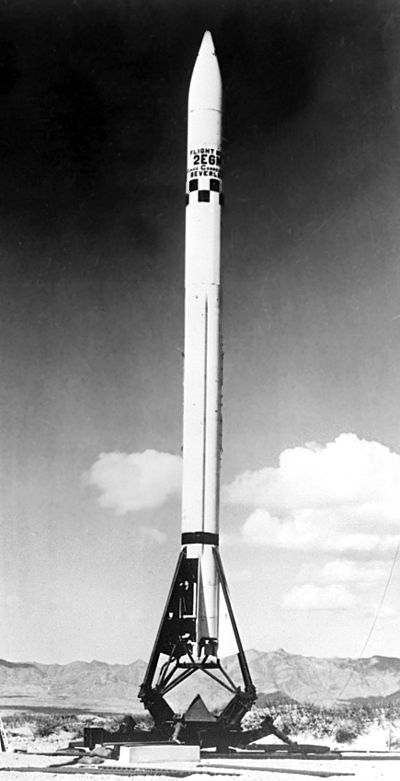 But the Army got it done. And the mission moved forward. It’s gone from the days of the old Army Ballistic Missile Agency to today’s Aviation and Missile Command and other members of Team Redstone.

“We’ve always been bringing people into the community and moving forward,” Baker said. “The community changes, has embraced change. And I think that’s a remarkable story in itself. As Mr. (legendary spokesman Dave) Harris used to say, we took what we learned in the space program and adapted it to the other missions we have here.”

“I went on NASA payroll Jan. 1, 1960, where NASA was formed July 1st, so I was there from the beginning,” Jones said. “I was the third employee of NASA in Alabama.”

Dave Newby was hired as the NASA liaison in October 1959. Newby hired Scott Little as his assistant. Jones was working at Redstone in the Army public affairs office, then called the public information office, before transferring to NASA. He arrived at Redstone in May 1956 and worked three and a half years for the Army before moving to NASA.

“I sat in (Wernher) von Braun’s office for three months until there was a public affairs office established within Marshall,” Jones said. “I couldn’t imagine it’s been 50 years.”

Jones was the first head of the news branch at Marshall from 1960-74. After that he became the director of Marshall public affairs when his boss, Bart Slattery, retired. Jones stayed in that position until he took early retirement in 1982; and he resides in Huntsville.

“It was a marvelous occasion to be a part of such a world-changing event,” Jones said.

Ed Buckbee, 73, of Huntsville, also experienced that history. He left the Army to join NASA’s public affairs office in 1961 at Marshall Space Flight Center and subsequently became the first director of the U.S. Space & Rocket Center. In 1959 he arrived at Redstone as a second lieutenant. Two years later, then 1st Lt. Buckbee resigned his active duty commission and transferred to NASA. The West Virginia native was on loan to the project to build a space museum outside Redstone’s gates from 1968-70 and became the U.S. Space & Rocket Center’s first director when it opened in March 1970. He retired in 1994 and has written a book, “50 Years of Rockets and Spacecraft,” and produced a documentary DVD, The Rocket Man, on Dr. Wernher von Braun.

“A lot of people don’t realize Saturn (rocket) really was a product of the missile command,” Buckbee said. “The Army did satellites, they launched the first animals with a life support program, and they began the nation’s manned space flight program.” 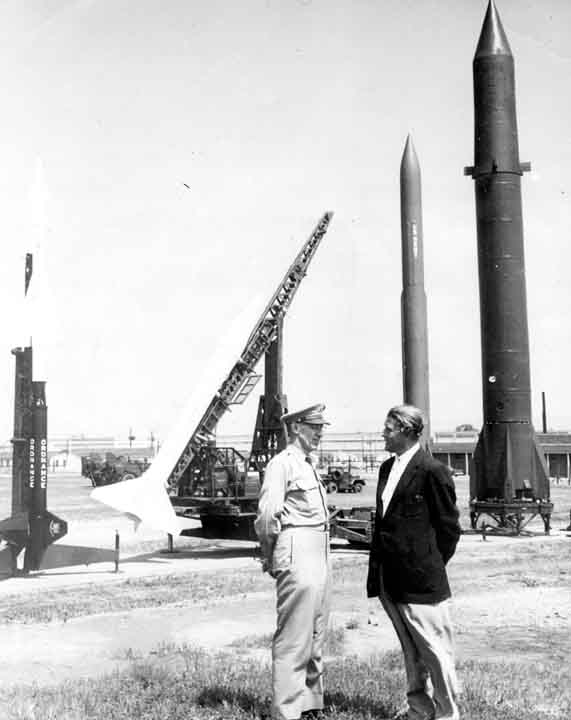 He remembers hearing von Braun talk about the difficult decision the German rocket team members faced when leaving the Army work force. The Army had made it possible for them to find a new home and had given them the resources to conduct their research. “For them to leave the Army was not an easy decision,” Buckbee said.

He also marveled at the foresight of President Eisenhower, a career military man who signed the executive order to create a civilian agency to run the U.S. space program. This offset competition among the military branches.

But the Army deserves credit for launching the space program. General officers like John Medaris and Holger Toftoy were among von Braun’s mentors. Buckbee described Medaris as “the George Patton of the missile community,” and Toftoy as “a strategist who came up with the idea of Operation Paperclip (the program used to recruit the German scientists for employment by the United States in the aftermath of World War II).”

“I think the Army deserves an immense amount of credit for laying the foundation for missile defense,” Buckbee said. “And if we had not had that special effort, we could very well be speaking Russian today.”