Re General George S. Patton was Deeply Anti-Semitic & Believed in Superiority of the ‘Nordic Race’ 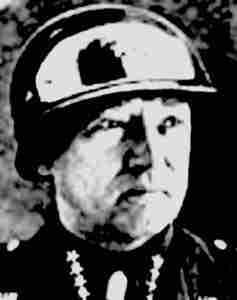 “… Harrison and his ilk believe that the displaced person is a human being, which he is not, and this applies particularly to the Jews, who are lower than animals. …” – General George S. Patton

Utter Nonsense!!! Patton General George S. Patton was NOT deeply Anti-Semitic. He had Jews on his staff, he had Jewish Friends. When he liberated the concentration camps and he “Patton,” called the press in and made sure it was documented! He did have Jewish Chaplains in Third Army. Who wrote this trash? The displaced person charge is wrong. The DP camps was established by Allied Headquarters. (Gen. Eisenhower) because of the ramped disease in the camps and the probable outbreak of it. All of the victims in the camp were in need of emergency medical help. Patton ordered his Third Army Medical staff to open up hospital tent and sent medical aid to them immediately. If the folks who write this crap can’t tell the truth the have no business posting here or anywhere else – Denny

Denny: Sorry to burst your revisionist propaganda-programming bubble, but … ” … Quick-tempered and bluff in speech, [Patton] was frequently involved in political controversy, not least because of his propensity to racist and anti-Semitic remarks. … ” – http://conservapedia.com/George_S._Patton,_Jr.

Letters to the Editor The Weekly Standard
August 14, 2005v

Dear Editor: Jonathan F. Keiler (Correspondence, July 18) asserts that “there is no evidence that [General George S. Patton’s] anti-Semitism, even if it exceeded the usual country-club variety, affected his conduct during the war.” Prof. Joseph Bendersky, in his study of antisemitism in the American military (“The ‘Jewish Threat’,” 2000), described two important instances in which Patton, motivated by antisemitism, influenced U.S. policy toward Jews. Following the Allied liberation of North Africa in November 1942, Patton, warning of a Jewish conspiracy to “take over” Morocco and the need to appease Arab public opinion, persuaded General Eisenhower to oppose abolishing the anti-Jewish legislation that the Vichy regime had imposed in the region, or even releasing local Jews who were being held in forced labor camps.  Eisenhower’s recommendations in turn were endorsed by Secretary of War Henry Stimson, and soon “set the tone for future American wartime policies on the entire Middle East.” After the war, Bendersky writes, it was Patton who “set the tone for army policies and behavior” toward the Holocaust survivors who were languishing in Displaced Persons camps in the American zone of occupation.  Patton despised the Jewish DPs, denouncing them as “animals” and “a sub-human species without any of the cultural or social refinements of our time.” Such attitudes inevitably filtered down to the officers and soldiers in charge of the camps.  The treatment of the DPs was so poor that presidential envoy Earl Harrison, after touring the camps in 1945, reported that “We appear to be treating the Jews as the Nazis treated them except that we do not exterminate them.”  When President Truman ordered Eisenhower to improve treatment of the DPs, a furious Patton wrote in his diary: “Harrison and his ilk believe that the displaced person is a human being, which he is not, and this applies particularly to the Jews, who are lower than animals.” Sincerely, Dr. Rafael Medoff Director The David S. Wyman Institute for Holocaust Studies Melrose Park, PA http://www.wymaninstitute.org/letters/2005-08-14-patton.php