" ...Gen. George Patton, head of the US military government of Bavaria, is quoted as saying that 'this Nazi thing is just like a Democratic and Republican election fight.' Patton was far from alone in wanting to minimize Nazi guilt ... With only a handful of exceptions, death sentences imposed on Nazis that were still pending in 1949 were commuted, and those serving prison sentences were let out in droves. ... "

The following article was first published by the US newspaper 'The Jewish Week'. 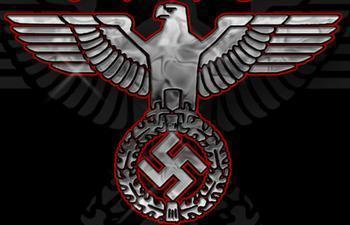 The recent revelation that US government officials gave aid and comfort to some Nazi war criminals and collaborators for several decades is as shocking as Claude Rain’s discovery in Casablanca that gambling was going on in Rick’s Café. It has long been known, for example, that SS-Hauptsturmführer (Captain) Klaus Barbie, who headed the Gestapo in Lyon, France, from 1942 until 1944 and who ordered the deportation of Jewish orphans to Auschwitz, subsequently became an agent of the U.S. Army Counter Intelligence Corps.Now we learn from “The Office of Special Investigations: Striving for Accountability in the Aftermath of the Holocaust,” a 607-page report prepared by the US Justice Department that The New York Times has made available in unredacted form, that one of Adolf Eichmann’s close associates, SS Captain Otto von Bolschwing, who “helped devise programs to persecute and terrorize Germany’s Jewish population,” ended up on the CIA payroll and was enabled by that agency to immigrate to the United States in 1954. Other Nazis similarly received special protection.

The report provides a comprehensive account, warts and all, of the Justice Department’s Office of Special Investigations, which has been charged since 1979 with the task of “detecting, investigating, and, where appropriate, taking legal action to deport, denaturalize, or prosecute any individual who was admitted into or became a naturalized citizen of the United States and who had assisted the Nazis by persecuting any person because of race, religion, national origin, or political opinion.” Over the years, OSI has brought an impressive number of Nazi war criminals to justice, including Treblinka guard Feodor Fedorenko; Karl Linnas, who ran a concentration camp in Estonia and in whose 1987 deportation I was privileged to play a minor role; NASA engineer Arthur Rudolf, who had knowingly used slave laborers in the production of V-2 rockets for the Hitler war machine; and, most recently, John Demjanjuk, who may not have been Ivan the Terrible of Treblinka but who most certainly was Ivan the Very, Very Bad of the Sobibor death camp.

Earlier this year, OSI was merged with the Domestic Security Section to form the Justice Department’s Human Rights and Special Prosecutions Section. In the interest of full disclosure, Eli Rosenbaum, who headed OSI since 1995 and now heads the reconstituted unit, and his predecessor, Neal Sher, are friends of mine, as is former U.S. Rep. Elizabeth Holtzman, who was responsible for the creation of OSI in the first place.

What the report does not do is place OSI’s work in its proper historical perspective. Sixty-five years after the International Military Tribunal at Nuremberg, and almost 50 years since the beginning of the Eichmann Trial, we take the bringing of war criminals to justice for granted. In fact, the very concept of placing Nazis and their collaborators on trial for atrocities they committed or facilitated was highly controversial during the two decades that followed the end of World War II.

In September of 1945, my mother was one of the principal witnesses for the prosecution at the first trial of Nazi war criminals, a British military tribunal at Lüneburg, Germany, in which the SS commandant, officers and guards of the Bergen-Belsen concentration camp, many of whom had previously served at Auschwitz, sat in the dock.

On her second day on the witness stand, one of the court-appointed defense attorneys suggested, according to a report published in The New York Times of Sept. 23, 1945, that my mother’s statement that she had seen one of the defendants kick and beat inmates was “pure fabrication.”

“I would like to point out,” my mother replied, “I was present and not the defending counsel during those conditions that I have described.”

This incident might be dismissed as one lawyer’s overzealous trial tactic, were it not for another news item published on the same page as the article about my mother’s testimony. There, Gen. George Patton, head of the US military government of Bavaria, is quoted as saying that “this Nazi thing is just like a Democratic and Republican election fight.”

Patton was far from alone in wanting to minimize Nazi guilt. The prevailing sentiment among anti-Communist Americans at the outset of the Cold War was to let bygones be bygones and to recruit the Germans as allies against Stalin. Wisconsin Sen. Joseph McCarthy rallied to the defense of Nazis who had been tried before American military tribunals, as did other right-wing American politicians and commentators who argued against imposing what was derogatorily called victor’s justice on a resentful German public.

“By the end of the 1940s,” according to historian Frank M. Buscher, “many in the United States had come to accept the conservative argument that the convicted Nazi perpetrators were not criminals, but were instead the victims of the Allied war crimes program.”

With only a handful of exceptions, death sentences imposed on Nazis that were still pending in 1949 were commuted, and those serving prison sentences were let out in droves. It is in this atmosphere that Nazis were, in the words of the Justice Department report, “knowingly granted entry” to the United States. By the time OSI came onto the scene almost 30 years later, it was very late in the day. The most noteworthy aspect of this historical drama, therefore, is not that Nazi war criminals were able to find a “safe haven” here, but that so many of them were successfully exposed and rooted out.

Menachem Z. Rosensaft is adjunct professor of law at Cornell Law School, general counsel of the World Jewish Congress, and vice president of the American Gathering of Jewish Holocaust Survivors and Their Descendants.