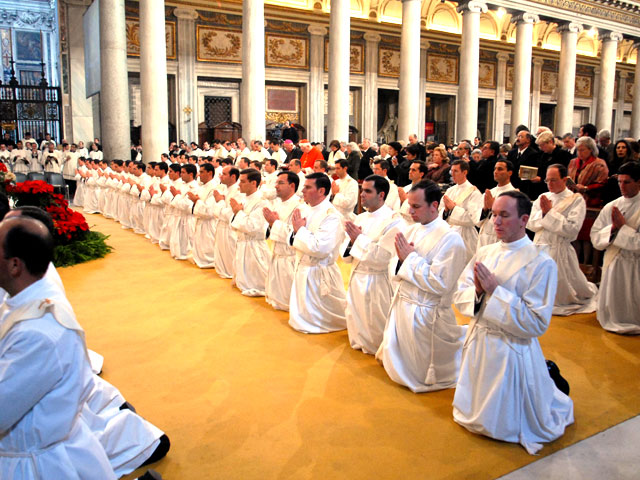 (March 14) -- As sex abuse scandals rock the Vatican, the results of an investigation into a rich, ultra-conservative and secretive Roman Catholic order founded by a priest accused of pedophilia and incest are due to be filed in Rome tomorrow.

The sordid story of the Legion of Christ, whose late founder, the Rev. Marcial Maciel Degollado, was a close ally of Pope John Paul II before being forcibly retired by the Vatican in 2006, is a microcosm of the crisis currently enveloping the church. At stake is whether Pope Benedict XVI will decide to take over the Legion and install new leaders from the outside or allow it to continue with its same hierarchy. Five bishops from five countries are expected to submit their reports about the Legion Monday.

The controversy over the Legion, which is now barred or severely restricted from operating in six U.S. dioceses, is especially awkward for Benedict because he wants to have John Paul, a staunch defender of the order, canonized.

"Maciel was a sexual criminal of epic proportions who gained the trust of John Paul II and created a movement that is as close to a cult as anything we've seen in the church," said author Jason Berry, one of two reporters who broke the Maciel story in 1997 and who directed a 2008 documentary about the priest called "Vows of Silence."

The Vatican ordered a worldwide investigation into the Legion, founded in Mexico in 1941, last year. But its response to decades of allegations involving Maciel has been as slow and often reluctant as its reaction to the long-festering sex abuse scandals now erupting in Ireland, Germany, Austria and the Netherlands.

In 1997, nine former high-ranking seminarians accused Maciel, who died in 2008, of sexually abusing them when they were boys training for the priesthood. Last year, it was discovered Maciel had an illegitimate daughter born in 1986 in Spain. Two Mexican men who say they are Maciel's sons claim he also sexually abused them as children.

With a leader said to be a manipulative monster who built a shadowy but powerful organization for elite, wealthy Catholics with schools in 22 countries – and a tradition of grooming handsome, clean-cut priests who all wear their hair parted on the left and black double-breasted suits -- the Legion of Christ sounds straight out of a Dan Brown novel. But while Opus Dei, the other controversial conservative Catholic order, was made famous in Brown's "The Da Vinci Code," the Legion of Christ is virtually unknown to most Americans – at least on the surface.

Two of the most visible priests in America are Father Thomas Williams, a movie-star-handsome CBS News analyst, and Father Jonathan Morris, who is sometimes referred to as "Father Knows Best" on the Fox News Channel. They belong to the Legion of Christ but rarely identify themselves as such on camera.

"Dan Brown got the wrong group," said Genevieve Kineke, an orthodox Catholic who was a member of Regnum Christi, the legion's lay movement, from 1992 to 2000 and writes a blog about her experiences. "The Legion of Christ is the scary cult embedded in the bosom of the mother church. Not Opus Dei."

Though the Vatican knew of improprieties involving Maciel as far back as 1956, he was praised and protected by John Paul II, who became pope in 1978 and once called Maciel "an efficacious guide to youth."

Even when the former seminarians went public in 1997 about Maciel's sexual abuse and filed a formal complaint with the Vatican, the church at first did nothing while the Legion and other high-profile conservative Catholics called them liars.

Shortly after that, then-Cardinal Joseph Ratzinger, who would succeed John Paul, ordered an investigation that ended with Maciel being consigned to a life of "prayer and penitence" after John Paul's death in 2005. But the Legion itself was not condemned nor the victims acknowledged.

It wasn't until the discovery that Maciel had a daughter living in Spain that the Vatican ordered the worldwide investigation, reportedly to find out who in the Legion knew about Maciel's behavior and how it was covered up.

"Of course we're shocked and disappointed by all of this," said Jim Fair, the spokesman for the Legion of Christ in North America. "It's as if Father Maciel lived in two different universes, like some old science fiction movie. And now it's all blowing up."

Fair said the order has "toned down the veneration," such as often removing the photographs of Maciel that adorned Legion facilities. He added that the Legion welcomed the apostolic visitation, which is what the Vatican investigation is called.

"He was obviously a very flawed man," said Fair. "It's hard to reconcile the guy we now know with the man who built hundreds of seminaries. But we will go on. The work of the church is bigger than humans. It's a little as if we found out Abraham Lincoln was a serial pedophile after he signed the Emancipation Proclamation."

Interviews with former members of the Legion and Regnum Christi paint a chilling picture of Maciel as a sociopathic master salesman who knew how to charm the upper echelon at the Vatican as well as enlist the wealthy and elite to his fast-growing order, all while using cult-like techniques.

"He created a structure that allowed sexual abuse, financial fraud and spiritual improprieties to go completely unchecked," said Kineke. "Believe me, the best and the brightest got sucked into this scam. I was one. I was an elite bully for Christ."

Kineke said part of Maciel's allure was that he represented an old-school alternative in a modern, post-Vatican II world.

"But these recent incest claims have rattled even the sturdiest of cages," she said.

Paul Lennon, 66, was a member of the order from 1961 to 1984 and directs ReGAIN, an organization founded by ex-Legionaries.

"It was nothing short of mind control," said Lennon, who wrote a 2008 book about Maciel called Our Father Who Art in Bed. "He conned everybody."

Mexican billionaire Carlos Slim, 70, who was named the world's richest man by Forbes last week, has long been a supporter of the Legion. His children attended Legion schools in Mexico.

Harvard professor and former U.S. Ambassador to the Vatican Mary Anne Glendon has also been a staunch supporter of the Legion.

But the man whom all Legionaries venerated as a near-saint and called "Nuestro Padre" (Our Father) allegedly led a double life as a pedophile and had at least two mistresses and three children.

"He destroyed my life," said Juan Vaca, 73, a former superior of the Legion of Christ who said he was molested by Maciel for ten years beginning when he was 12. "I dreamt of being a good priest. He killed all my dreams."

Vaca, like many interviewed by AOL News, doubts that the Vatican will make any lasting changes to the Legion of Christ, despite the investigation.

"The Vatican may distance itself a bit but the Legion is too powerful to shut down," Vaca said.

"I turned into a block of ice," said Vaca, who had left his family behind in Mexico to move to the order in Spain. "I was petrified."

Vaca said 28 other young seminarians were sexually abused by Maciel at the same time he was, and adds that some of them "went on to abuse others as they grew up."

That misuse of sex and power was an undercurrent that helped fuel the growth of the order, according to several former members of the Legion and Regnum Christi.

"Maciel always told me to recruit the most handsome boys from the best families," said Vaca. "They were trained to approach rich women. I'm not saying they had sexual relationships with these women but they did know how to charm them."

Kineke and others also said Legion priests are notoriously successful in winning over women to the church.

"They are spiritual seducers," said another former Regnum Christi member. "They are the only priests I've seen who have swept people off their feet. These men woo women because they want access to our children and our husbands' wallets."

In an interview not long before his death in 2007, "Vows of Silence" author Gerald Renner said Maciel was not the only priest in the Legion who led a double life. Renner referred to one priest who he said was known as "the horndog of Rome" for his many affairs with women.

"The Legion by its very nature spawns people who lead double lives," said Lennon. "Maciel was certainly not the only hypocrite in the Legion but he was definitely the worst one."