With his new Faith and Freedom Coalition, Ralph Reed hopes to simultaneously bury his past and to make the connection he’s been yearning for: to “address a wider range agenda, social issues plus economic issues.” Will that connection and mutual cries of socialism be enough to wed the two most energetic right-wing movements? 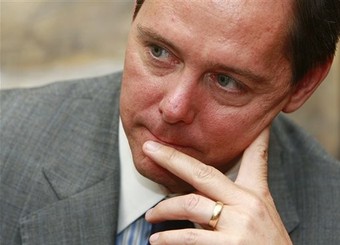 Last November, the evangelist James Robison, an early organizer of the religious right and a mentor to the young Mike Huckabee, was ruminating about the state of the nation. He and his wife, Betty, he said, were increasingly worried about the country “drifting away from what I call ‘foundation principles,’” the “foundational belief system based solidly upon the truths found in the scriptures.”

Robison, whose daily talk show favors affable studio chats about Jesus and personal fulfillment to politically-charged polemic, packed a series of religious right dog whistles into his lament about the country’s downward spiral. The founders, he said, believed in the word of God, and came to America looking for “spiritual freedom.” The founders were dedicated, he went on, to “a very limited government that functioned to protect that freedom,” a version of history that “not many get to anymore in our public school system.” Robison then introduced his antidote to the fallen nation: the recently resurrected Republican political operative Ralph Reed. The one-time golden boy of the conservative movement—sullied by the Christian Coalition’s decline under his leadership, and later his sordid partnership with convicted lobbyist Jack Abramoff—was making the rounds promoting his new incarnation, the Faith and Freedom Coalition. In introducing Reed as a guest on his program, Robison gushed that when he learned of Reed’s new political effort, he exclaimed, “faith and freedom? I said, ‘I’ve just been praying about that.’”

It Costs a Lot of Money to Print Voter Guides

Whether Reed is the answer to the conservative movement’s prayers remains to be seen. But he is engaged in a full-court press to re-create the Christian Coalition for the 21st century through FFC affiliates in the states, a process already underway in Florida, Iowa, Colorado, Nevada, California, Virginia, and Tennessee. In announcing on Wednesday that he had decided against running for the Congressional seat being vacated by retiring Georgia Republican John Linder, Reed promised supporters, “In 2010 and 2012, FFC will register an estimated one million new faith-based voters and make tens of millions of voter contacts in what may be the largest conservative get-out-the-vote effort in modern political history.” Reed, who has been suspected of exaggerating the numbers of Christian Coalition members and distributed voter guides, promised his for-profit Century Strategies’ “voter contact subsidiary and grassroots team will be involved in a number of races in 2010.” Reed’s FFC is essentially a retread of the Christian Coalition which, under Reed’s leadership, was investigated by Congress, the Federal Election Commission, and ultimately (after Reed’s departure) had its tax-exempt status denied over its engagement in electoral politicking. But Reed, who has managed to survive the Christian Coalition meltdown, his two-timing of evangelicals through his business association with Abramoff, and his 2006 loss in the Republican primary for lieutenant governor of Georgia, is sifting the remnants of the Christian Coalition infrastructure to build FFC. O’Neal Dozier, pastor of the Worldwide Christian Church in Pompano Beach, Florida, and a Christian Coalition of Florida board member, said that the board voted last year to “come under the umbrella of” the FFC. For an organization that was low on funds, said Dozier, it was “a great opportunity that we felt we couldn’t pass up.” Now Dozier also serves on the FFC board, and says that the affiliation brings “more fundraising capabilities. With Faith and Freedom and with Ralph being known as he is, we can get more conservatives involved and coming to functions that we have in order to raise funds,” both locally and nationally. “It costs a lot of money to print voter guides,” he chuckled. Dozier, whose extreme views have caused him some trouble in Florida politics, has been fighting the construction of a mosque near his church because he claims it has ties to terrorists. “The Muslim people we believe are beautiful people,” he told RD. “They’re beautiful people, we just believe that the Muslim people are victims of a very dangerous and evil religion and that religion is Islam.” He said that neither the Christian Coalition nor the FFC would get involved in his mosque-fighting efforts, and that while they would continue to stick with the traditional social issues, he wanted to see a focus on economic concerns. “Social conservative who talked about economic issues” As early as 1993, Reed had been pushing the religious right to broaden its appeal, arguing that it “has limited its effectiveness by concentrating disproportionately on issues such as abortion and homosexuality.” Now—as his business partner Tim Phillips heads up tea party astroturf group Americans for Prosperity—he’s burrowing for an opening to convince activists that social and economic issues are linked. He recently described an overlap between tea party activists and his organization on the Christian Broadcasting Network. Religious right activists see that overlap too, but not yet a marriage between themselves and the tea party movement. But Reed’s efforts seem directed at capitalizing on panic over “socialism” whipped up by the tea partiers. Steve Scheffler, president of the Iowa Christian Alliance (a successor organization to what used to be the Christian Coalition chapter in Iowa, and which is in the process of forming an Iowa FFC affiliate), said that the “one thing” social conservatives and tea party activists “are knitted together on is their dislike, their distrust, their disgust with Obama’s march toward socialism, which is a takeover of every facet of a person’s life.” Scheffler is an old hand of the religious right in Iowa, sought after by Republican presidential candidates seeking advantage in the state’s early caucuses. The FFC, said Scheffler, “will address a wider range agenda, social issues plus economic issues, issues that are important to traditional families.” He pointed to Virginia Governor Bob McDonnell (for whom FFC helped mobilize voters) “as a perfect example” of a “social conservative who talked about economic issues,” a combination Scheffler maintained is required to get elected. The Virginia FFC paid for robocalls recorded by Huckabee and Sarah Palin endorsing McDonnell, though the McDonnell campaign tried to distance itself from the Palin endorsement. http://www.religiondispatches.org/archive/religiousright/2347/will_ralph_reed%E2%80%99s_new_venture_wed_religious_right_to_tea_partiers

Previous Article
Secretive Right-Wing Catholic Order Founded by Accused Pedophile Under Fire
Next Article
Celebrated “Patriot” of the Tea Party Movement: Who (and What) Exactly is Jerry Ray Hall?

Celebrated “Patriot” of the Tea Party Movement: Who (and What) Exactly is Jerry Ray Hall?
Mar 14