ADL Pius XII did not Save Jews in WWII

" ... the ADL concluded that the claim amounted to an 'apparent campaign of misinformation' and urged Pope Benedict XVI to reject its conclusions. ... "

The Anti-Defamation League took the Catholic Church to task this week, disputing "historical evidence" cited by Church officials as proof that WWII-era Pope Pius XII had worked to save Jews from the Holocaust. 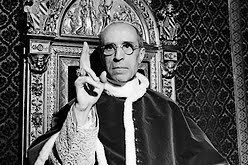 Pope Pius XII, wearing the ring of St. Peter, raises his right hand in a papal blessing at the Vatican, 1945.

The evidence in question was presented at a conference in Rome in September 2009 and apparently cleared Pius XII of accusations that he was silent in the face of the atrocities taking place in wartime Europe. The conference was held by the Pave the Way Foundation, a group that works to bridge religious divisions.

On December 19, Pope Benedict declared Pius "Venerable," a stage on the road to full canonization and sainthood. The move was met with criticism from Jewish groups that believe Pius deserves censure for his "neutrality policy" and acquiescence during the war, even while European states passed anti-Jewish laws and began mass deportations of Jews to concentration camps in the east.

The Vatican has claimed that Pius worked to save Jews throughout the war but was forced to do so behind the scenes because he was surrounded by Fascist Italy and Nazi Germany.

According to the ADL, the evidence, which included wartime documents from an Italian internment camp for Jews in Campagna, did not demonstrate "Pope Pius XII's efforts to help Jews in the face of Nazism," as claimed by Pave the Way founder Gary Krupp.

After examining the evidence with a handful of expert historians, the ADL concluded that the claim amounted to an "apparent campaign of misinformation" and urged Pope Benedict XVI to reject its conclusions.

"To use the Campagna files to suggest that Pope Pius XII was active in attempting to rescue Jews is to demand something that [the] historical record cannot sustain," according to historian Paul O'Shea, author of A Cross Too Heavy: Eugenio Pacelli, Politics and the Jews of Europe 1917-1943, who participated in the study.

"Our examination serves as a salutary reminder of the distinction between alleged claim and verifiable fact," said Debórah Dwork, a Holocaust scholar at Clark University in Massachusetts.

ADL national director Abraham Foxman said the "historical evidence" presented to Pope Benedict [by the Pave the Way conference] makes it all the more crucial for the Vatican to open its Holocaust-era archives to independent scholars and historians now.

"We reject the claim that the world and aging Holocaust survivors must wait another six years until all 16 million documents from Pope Pius' papacy are catalogued by the Vatican.

"We note that Pope John Paul II opened a cache of Holocaust records from Pope Pius XI before the records of his entire papacy were catalogued. We request that Pope Benedict take the same courageous decision and order the relevant Holocaust-era materials be opened now."