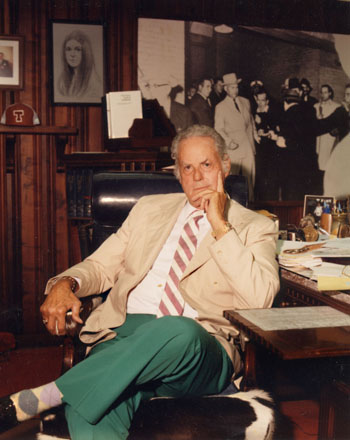 He Defended an Iconic Assassin

Jasper, Texas — The man who defended Jack Ruby in the killing of Lee Harvey Oswald has been honored as a part of Jasper history. The Jasper County History Museum recently unveiled a replica exhibit of Joe Tonahill's office, including his cowhide furniture, bear rug and large-scale photo of the shooting of Oswald, museum director Nina Messersmith said.

Tonahill often used the photo to explain to visitors his belief that an epileptic seizure caused Ruby to shoot John F. Kennedy's alleged assassin. The country lawyer pointed out that Ruby pulled the trigger with his middle finger, while his other hand was thrown the opposite direction — indicative, Tonahill later told The Beaumont Enterprise, of such a seizure.

"It is kind of unusual that someone in a trial that prominent would be from the little town of Jasper," Messersmith said. "I didn't realize how prominent he was even before the trial."

Tonahill, who died in 2001 at age 88, was one of the founders of the Texas Trial Lawyers Association before the trial 46 years ago this month, which some say defined his career.

In the years following the trial, Tonahill studied hundreds of documents and pages of evidence about the case. His research and experience with Ruby led him to dismiss conspiracy theories, pointing to an autopsy report on Ruby that showed he had 15 brain tumors.

Tonahill and San Francisco lawyer Melvin Belli based their defense upon the belief that Ruby suffered episodic insanity and murdered Oswald during a "psychomotor epileptic seizure," The Enterprise reported in 1979. That January, the U.S. House Assassinations Committee dealing with the Kennedy killing concluded one of the shots fired into Kennedy and former Gov. John Connally came from the grassy knoll at Dallas' Dealey Plaza.

"They're reaching way out to try and bring into credibility some very shaky evidence," Tonahill told The Enterprise.

The first time he and Belli interviewed Ruby, Tonahill said the nightclub owner was "pretty cheerful, exhilarating." Ruby thought he would be hailed a hero for saving the world a lot of problems, especially Jackie Kennedy, who wouldn't have to testify in a Kennedy murder trial, Tonahill said.

After the Dallas mayor testified that Ruby's act was a disgrace to the city, he began "cracking up." "He was sick, there's no doubt about it. You don't commit murder out in front of the world ... He had to be an absolutely insane man to do it or it had to be a setup," Tonahill told The Enterprise. The arguments didn't convince the Dallas County jury, however, who declared Ruby guilty after a six-week trial.

Belli and Tonahill managed to get the decision reversed and a second trial set for Wichita Falls, but Ruby died of cancer shortly before the trial was to start.

Nice article, but it is the last sentence is wrong.
Belli and Tonahill did not manage to get the trial verdict reversed! Belli was fired by the Ruby family almost immediately after the March 1964 verdict…Tonahill had a brief stay on the appeal team and then dismissed early on. It was Sol Dann and Elmer Gertz who led the appeal process and they where the ones who got Judge Brown disqualified and the damaging police testimony thrown out.

This is why you can’t quite trust what the media spins on anything. It is people like you that keep the facts, the real facts.