J.T. (Jason Todd) Ready, a member of the neo-Nazi National Socialist Movement, specializes in bashing immigrants. After being court-martialed twice, Ready was discharged from the Marines for bad conduct in 1996. Ready, who has run for various Arizona offices usually without success, advocates for the placement of landmines on the border and rails against Jews and nonwhites. In June 2010, Ready led a group of armed extremists into the Arizona desert to apprehend immigrants and drug smugglers.

In 1992, Ready was arrested for damage to property and aggravated assault with a weapon. He accepted a plea bargain and was convicted of assault. Ready had been with a friend who destroyed a car mirror with a baseball bat.

In 1996, while serving in the Marine Corps as a lance corporal, Ready was court-martialed twice. The first time, after being absent for eight days without authorization, he was convicted of unauthorized absence, failing to follow an order or regulation, and larceny and wrongful appropriation. He was convicted, demoted to private and jailed for three months. Later that year, Ready was court-martialed again for conspiracy, assault, and wrongful solicitation and advice. He was found guilty, spent six months in detention, and was discharged from the Marine Corps for bad conduct.

In 2007, Ready was pulled over for driving a vehicle with a fake license plate. He was carrying a 9mm Beretta handgun at the time. Ready was arrested and charged for possessing a traffic preemption emitter, which is an illegal device that can change traffic lights from red to green.

In His Own Words 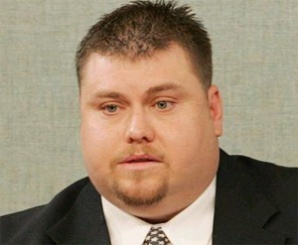 “This is a white, European homeland. That’s how it should be preserved if we want to keep it clean, safe, and pure.”  --Ready speaking at a National Socialist Movement rally in Oct. 24, 2009

“The jew [sic] itself knows it is a parasite. I have had them admit as much to me and laugh in my face… But a parasite cannot carry on in its parasitic nature if it is exposed for what it really is. Their whole house of cards comes tumbling down for all to see. Like in 1933 Germany. Just because it has two legs, does not change its nature any less than a six-legged parasite stops sucking blood. There have been many pogroms when the host people stops being victims of these vampires. Another pogrom is approaching.” --New Saxon blog posting, May 8, 2010

“This is the minuteman project on steroids. We’ve got people with assault weapons. We will use lawful, deadly force when appropriate.” -- KOLD News 13, June 21, 2010

In 2004, Ready tried to make a career for himself in politics, running for a seat in the Arizona House of Representatives. One of his campaign goals was to defeat the threat he claimed was posed by undocumented immigrants to American health and culture. He told a reporter that the state could improve its education system if it would “deal with this mass illegal influx of foreign students who do not even embrace the same language and culture as Americans and who spread tuberculosis, whooping cough, lice, and other third-world biological diseases to other children.” He was defeated in the election.

Ready made headlines in March 2006 when he fired a pistol at a Latino man armed with a BB gun (no criminal charges resulted from the incident). At the time, he was running for the Mesa City Council. His campaign was further derailed when, shortly after Ready volunteered to act as master of ceremonies at the Mesa Veteran’s Day parade, it came to light that he had been court-martialed and drummed out of the Marines.

In May 2006, Ready led an anti-illegal immigration group he created, Americans First, in a protest on the Mexican consulate in Phoenix. He told The Arizona Republic, “We are advocating that the government of Mexico should be designated a ‘threat nation’ because they are openly subverting our laws and sovereignty.”

Running as the only candidate in a primary later that same year, Ready won a post as GOP precinct committeeman in a west Mesa district. Shortly thereafter, Ready became a prominent volunteer with the Minuteman Civil Defense Corps, a border-watch group described by then-President George W. Bush as being comprised of “vigilantes.”

In September 2007, Ready marched under a swastika banner in Omaha, Neb., with brown-shirted members of the neo-Nazi National Socialist Movement (NSM), a group he would later join. Ready gave a speech at the rally, where he was billed as an “Arizona Republican activist.” That same year, Ready quietly created a profile on the neo-Nazi social networking site New Saxon, run by the NSM, and appeared at the neo-Nazi National Vanguard's “Winterfest” gathering in Phoenix in December 2007.

In 2008, these acts came to the attention of Arizona congressmen John Shadegg, Jeff Flake, and Trent Franks. In a letter addressed to the chairman of the local Republican Party, they asked that everything possible be done to expel Ready from his position as GOP precinct committeeman. However, Ready retained his office until his term ran out in 2008, though he did not seek reelection.

Rejected by the Republican Party, Ready soon found a home with his fellow neo-Nazis, joining the nearly 2,000 registered users of New Saxon as “Viking_Son.” In 2007, his New Saxon profile displayed photographs of Ready wearing a kilt and a bulletproof vest, and scouring the desert for “illegals” through a pair of binoculars. Ready listed his “turn-ons” as “a woman who loves our Race, Kultur [German for culture], Heritage, History and Future,” identified the racist fantasy novel The Turner Diaries as his favorite book, and described himself as a big fan of neo-Nazi teen pop duo Prussian Blue.

In November 2009, Ready displayed a large portrait of Hitler at an anti-illegal immigration rally held at the state capitol building in Phoenix. When a protester attempted to take the portrait from him, Ready shoved the protester to the ground.

On June 19, 2010, Ready took a group of heavily armed civilians into the Vekol Valley in Pinal County, Ariz., a border area noted for drug smuggling and illegal immigration. He described the action as “the Minutemen project on steroids.” Ready and about 10 other civilians, including Harry Hughes, a poster on New Saxon and NSM mailing lists, and NSM regional director Jeff Hall, armed with rifles and pistols, “secured” an abandoned building and led armed “patrols” around the desert.

Local law enforcement agents did not welcome Ready’s assistance. Paul Babeu, the sheriff of Pinal County, said: “Though I appreciate their support and offer to take up arms and patrol, this would not be helpful, and would only cause a strain on already strained resources, and their safety needs to be a priority. I do not ask or encourage them to come here.”

That didn’t seem to crimp Ready’s style. In a June 2010 New Saxon forum post, he wrote, “I would eventually like to fund a whole plattoon [sic], full-time, against the Narco-Terrorists. This will take a group effort, however. But we will take it Direct Action against the enemy and kill them (lawfully).” On the New Saxon forums, Ready requested that his supporters donate guns, smoke grenades, and pepper spray to aid the effort.

Ready claimed to have quit the NSM on July 4, 2010. He told a reporter that he intended to concentrate on the border and his personal life. Ready said he would continue his efforts to stop "narco-terrorism" by leading his self-styled militia, Ready's Rangers, on patrols in Arizona's Vekol Valley.

Now We’ve got Nazis Running Around the Desert

J.T. Ready’s Neo-Nazi Patrol for Migrants in the Vekol Valley

Nazis Patrol the Border … What Could Go Wrong?