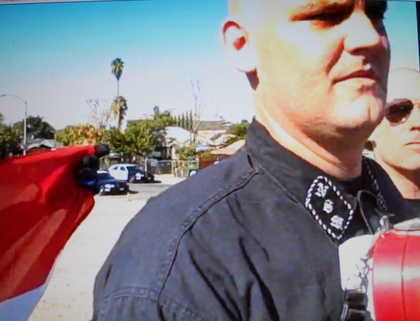 According to the Riverside Press-Enterprise, a mysterious Jeff Hall has been running a stealth campaign for a seat on the all-powerful water board. (i.e. he’s not campaigning at all and hoping voters just randomly elect him.)

In addition to being an aspiring water boardmember, Hall is also a prominent neo-Nazi and the leader of the California chapter of the National Socialist Movement. Some of his hobbies include organizing rallies to protest illegal immigration and waving Nazi flags outside of synagogues. Water Board members say they “have no idea what his platform on water issues is.” Just a guess here, but it probably has something to do with the genetic superiority of white people?

It’s sort of surprising that neo-Nazis have such modest political goals, given the whole “world domination and genocide” thing they used to have going. (via 51dollars50cents.)

FBI Looks at J.T. Ready for Domestic Terrorism
May 06