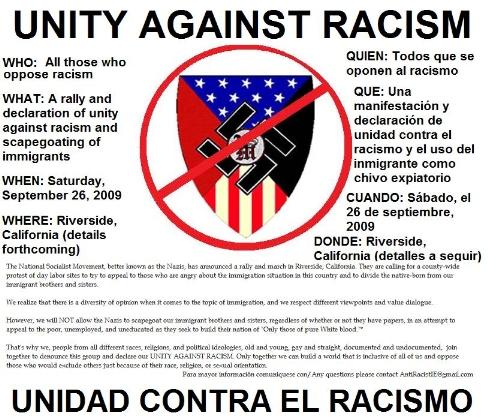 ​Several groups are preparing to demonstrate against a purported neo-Nazi organization that is planning a rally outside City Hall downtown on April 17.

Over the weekend a self-described "coalition of grassroots Los Angeles groups" announced a counter-protest at 10 a.m. that day at Temple and Main streets. The coalition states it will "form a moving picket line around city to oppose racism, sexism and genocide and support human rights and liberation for black, brown, Asian, native, gay, disabled and all poor and working people."

The Answer Coalition has also announced plans to counter the noontime rally and states that the neo-Nazi group, the National Socialist Movement, has usually been shouted down at urban Southern California events.

"These racists have been organizing rallies in Southern California to attack and harass immigrants," states the coalition. "But each time, they have been driven away by huge counter-protests."

The NSM is described as fervently anti-immigrant. Now, if we were neo-Nazis, and we're not (they rejected our application), we certainly wouldn't choose the center of one of the most-diverse, most-Latino, most-immigrant-dependent cities in the nation to do our thing.

Then again, maybe they calculated that all the crunchy, "Kumbaya"-singing Angelenos will be at Coachella that weekend.