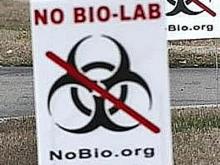 TOPEKA | The federal government has seriously underestimated the risk that a new federal lab in Manhattan, Kan., could accidentally release dangerous pathogens like foot-and-mouth disease, according to a new report released today.

Without greater precautions, the report warns, pathogens like foot-and-mouth disease could escape from the planned bio-defense lab and devastate the agricultural economy.

The study, conducted by the National Research Council, concludes that there is a 70 percent chance that foot-and-mouth disease will escape from the National Bio- and Agro- Defense Facility and cause an outbreak within 50 years. It pegs the economic loss caused by such an outbreak at $9 billion to $50 billion, and cites “several major shortcomings” in an earlier risk assessment by the Department of Homeland Security.

But the lab’s supporters in Manhattan, Topeka and Washington defended the project, noting that the NRC report ignored several safety protocols already planned. They’ll include state-of-the-art systems to make the lab as secure as any in the nation, according to Tom Thornton, president of the Kansas Bioscience Authority.

The lab, he said, will “implement every safeguard, every safety protocol, every mitigation strategy available.”

Today’s report raises new questions about the safety at the National Bio- and Agro- Defense Facility. Kansas beat out several other states to win the $650 million federal lab, set to open in 2018.

Congress last year blocked funds for the project until concerns about its safety could be resolved. The new report won’t put those questions to rest – and could potentially delay the project further if Congress decides to take another look.

The NRC report also says the government hasn’t yet shown it has the safeguards in place to prevent an outbreak or contain it should it occur. The lab’s proximity to the nation’s cattle is another concern.

“Roughly 9.5 percent of the U.S. cattle inventory lies within a 200-mile radius of the facility,” the report noted. “Given that the disease (foot-and-mouth) is highly contagious and that the chance of its escape is not zero, rigorous and robust regional and national mitigation strategies are needed… before the facility opens.”

Defending the project, the state’s six members of Congress put out a joint statement: “We are confident this facility will be the safest research laboratory in the world and its mission is critical in order to protect our nation’s food supply.”

And Manhattan Mayor Bruce Snead said he welcomed the NRC report, which he said would lead to more robust safeguards.

“This is the due diligence that’s been part of the project all along,” Snead said. “Good, tough questions have to be raised and answers developed. We want the safest possible facility for the campus, the community, the region and the nation.”

West Nile Virus: Questions that have Never Been Answered