An FBI Provocateur Set Off the 1970 U. of Alabama Student Riots

AT LARGE: The missing Jack of Hearts

“The only person on the scene missing was the Jack of Hearts.”  —Bob Dylan 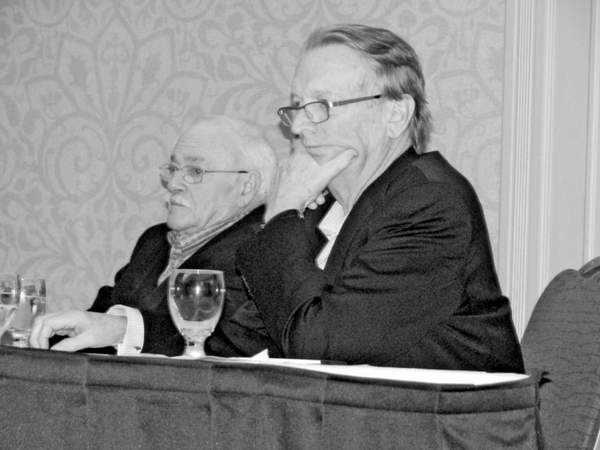 A panel at the “Days of Rage” conference convenes at the University of Alabama on Oct. 22. The 40-Years’ Prospective discussed the May 1970 events of unrest on the Capstone.

TUSCALOOSA | That line from Dylan’s song story “Lily, Rosemary and the Jack of Hearts” popped in my mind near the conclusion of the “Days of Rage” conference at the University of Alabama. The conference was on the 1970 arrest of hundreds of students following the burning of a vacant building that resulted in the campus being locked down in semi-martial law for the better part of two weeks.

For it wasn’t until the last few minutes of three-and-a-half hour symposium about those events that the name of Charlie Grimm was even mentioned,

But without the nefarious acts of Grimm, every bit as devious and slippery as Dylan’s Jack of Hearts, the arrests, the heads cracked by the police, the overnight occupation of the Student Union Building, and especially, the torching Dressler Hall may never have happened.

Grimm, a member of the UA wrestling team from San Diego, was a double agent. He pretended to be a part of the peace movement by night and an FBI informant by day.

Attorney Jack Drake, one of the members of a fascinating panel discussion featuring six people heavily involved in the events of May 6-19, 1970, that concluded the Oct. 22 conference here, flatly stated that Grimm alone set Dressler Hall, the former ROTC headquarters where the Ferguson Center now stands, afire around 2 a.m. the morning of May 7.

Grimm and about 250 other students were arrested during the campus unrest, which was touched off by the shooting deaths of four Kent State students at the hands of the Ohio National Guard, but he never came to trial in Tuscaloosa. Like the Jack of Hearts, he disappeared before his trial, leaving the Tuscaloosa FBI’s post office box as his forwarding address.

It was not until months later, after the students arrested were exonerated and the wounds from billy clubs had healed, that any of this came to light. That is, that Grimm was more than just a hothead who was carrying around a large poster of a pig and an American flag when he was arrested with another student “for failure to obey a police officer” shortly after the fire.

The story of Grimm’s double life was broken by then associate editor Paul Davis in this paper when he tracked him down in Sept. 1970 and talked to him on the phone. He denied everything, but a year later was scheduled to go on CBS’s “60 Minutes” to spill the beans.The 12-minute segment never aired, and many at the forum are convinced it was because of FBI pressure.

But, Davis somehow got a transcript and in a column in these pages wrote, “Grimm readily admits he ‘burned a few buildings and tosses a few Molotov cocktails during the disturbances here.” Davis wrote that was “strong stuff,” but not as strong as Grimm’s “contention that he was working as an informer for the Federal Bureau of Investigation.”

During those “Days of Rage,” exacerbated when then UA President David Mathews had the state troopers called in to augment already aggressive city policemen, Grimm was arrested near the Quad on the night after the fire along with Robert Willis Hampton. Hampton testified at his trial in Tuscaloosa Municipal Court that he hadn’t even known Grimm until he saw him holding a poster with a pig on it and an American flag.

“He looked interesting,” Hampton testified in answer to a question from young municipal attorney Richard Shelby, who was representing the city, while Drake and Ralph Knowles were defending single defendant Hampton in a trial before Judge Joe Burns. Grimm was mentioned several times in the trial, but only tangentially, although I found it interesting that unlike Hampton, at least one of the arresting officers testified cryptically that he knew him.

The torching of Dressler Hall is undoubtedly what caused University Police, Tuscaloosa Police, Alabama State Troopers and a detachment of the National Guard to patrol the sylvan acres of the Capstone for those nearly two weeks, but to be certain, I think there was bound to be some civil disobedience the night of May 6.

Carol Self, a Miss Alabama and cheerleader-turned feminist, was on the UA panel and said that her women’s consciousness-raising group was looking for some peaceful way to join in the growing nation-wide protest of the horrors at Kent State.

She said they decided on a candlelight vigil, at which only women would speak, “so not to be intimidated by the guys.” Self said they plastered the campus and especially Sorority Row with flyers announcing the event on May 6, knowing “if we could get the girls to come out, the boys would too.”

Some 3,000 students (out of an enrollment of 13,000 at the time) participated in what was described as a moving and even beautiful procession across the Quad to the steps of the Student Union Building, now Reese Phifer Hall.

But Self said there was no plan for how to end the protest and that students began to wander off in all directions.

Had Dressler not been torched, I believe the protest prompted by the events at Kent State would only have been a story for a day or two. But I am also pretty sure the Supe Store in the union building would have been occupied overnight, as turned out to be the case — it was handy and just too good a target for those with emotions still roiling.

The staff fled the cafeteria-like store pretty quickly and students helped themselves to lots of ice cream, a fact that seem to particularly tick off Judge Burns at Hampton’s trial, at which he was convicted, fined $100 and sentenced to “six months of hard labor,” all of which was thrown out on appeal.

But the building was burned and the campus did become occupied by hundreds of law enforcement officers, who engaged in many confrontations with students for more than a week.

Wayne Greenhaw, a reporter for the Montgomery Advertiser at the time, got to campus a couple of days after the fire, and at one point found himself in the middle of a melee.

He tried to make it to a phone in the alcove of the union building but was turned back by a Tuscaloosa policeman who said he didn’t “give a damn” that he was just a journalist trying to file a story, Greenhaw said at the forum.

After he was turned away once, the resourceful reporter circled around and made it to the phone, where as he began to dictate his story, “I saw out of the corner of my eye a big old cop and a billy club headed right for my head.” Greenhaw ducked and ran down the street to a fraternity house where he was given shelter and, more importantly, a phone.

He said as he filed his story, his editor was skeptical of the level of violence he was describing.

“I just held the phone out the window, and he heard all the screaming and the heads getting thumped,” he said. “It ran just like I wrote it.”

But back to Charlie Grimm.

Once his questionable alliances were made public, the local chapter of the ACLU held a press conference at which a 10-page prepared statement was read by Drake accusing him of being an agent provocateur, who had first been “flipped” by the FBI when he was arrested for drugs.

I was surprised at what Drake had to say at the forum, some four decades later.

“I don’t today believe that Charlie Grimm was an agent provocateur in the sense that he enjoyed the protection of the FBI and was committing crimes, although he certainly set Dressler on fire,” he said. “That’s a good story and I am the one who wrote the press release 40 years ago that told it, and I believed every word I wrote at the time.

“But I don’t think that’s what happened now,” he said. “Charlie Grimm was just a loose cannon.”

And, of course, the only person on the scene missing at the forum.