Phyllis Schlafly and the Eagle Forum - The Constantine Report
0 SHARES 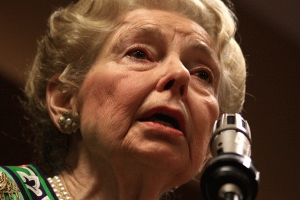 Phyllis Schlafly is the founder of the conservative group, the Eagle Forum.  She doesn’t like Muslims much, but then she doesn’t seem to be fond of a lot of people.  Her views on many issues are extreme.

Schlafly has contended that married women cannot be sexually assaulted by their husbands.  “By getting married, the woman has consented to sex, and I don’t think you can call it rape.” ***

She is anti-gay.  Gays, she said, are already free to live together. “Nobody’s stopping them from shacking up.  The problem is they are trying to make us respect them, and that’s an interference with what we believe.”   ***

In the U.S., there are Muslim training camps across the country actively planning attacks on American soil. Young Americans are being converted to Islam in our jails, our military, public schools and universities, and in churches that preach Liberation Theology. Muslims have gained two seats in the U.S, Congress and have won seats in state and local races. Public school textbooks are becoming pro-Islam and anti-Christian. Muslims are buying Fortune 500 companies and high tech companies. There is a Dow Jones Islamic Index. Islamic banks, insurance companies and mortgage companies are springing up across the country. Our open borders welcome Muslims.

The challenge to America is to stop the spread of Islam in the U.S. before it is too late.

4. Muslims should be ineligible to run for political office

5. All Muslim military personnel should be removed from the U.S. armed forces

The One People’s Project notes

Schlafly’s is one of those conservatives who believe they should have the freedom to take freedom away from others, all in the name of “traditional values”. According to her, children should be “taught from textbooks that honor the traditional family as the basic unit of society, women’s role as wife and man’s role as protector and provider.” Her traditional values foreign policy has meant giving her support for military coups that overthrew the democratically elected governments of Goulart in Brazil back in 1964, and Allende in Chile in 1973, which gave those countries fascist dictatorships and “death squad” governments. Don’t ask her about that kind of things these days though. On a Book TV appearance on Jan 5, 2003, a caller to the program challenged her on this kind of support for despotic governments that are supported by the US Government, and Schlafly responded by saying the caller “must have been thinking of someone else”.

One can expect the same coy response when she talks about her efforts in regards to keep back those races and cultures that are not hers. On that same Book TV show another caller asked about her stance on the Civil Rights Movement, particularly the Civil Rights Act of 1964. “It simply wasn’t an issue for a lot of us, and it was a very small part of what (1964 Republican Presidential Candidate Barry) Goldwater’s platform was,” she said about her Goldwater campaign activities. “His big crisis was the California Primary, and I don’t think they ever heard of the Civil Rights Act in California. It was no issue in him getting the nomination.”

In fact, Ronald Reagan, who in 1964 was two years from his successful campaign for Governor of California, was one of the Republicans who opposed the Civil Rights Act. Reagan ran on a law an order platform, which many saw as him wanting to fight those civil rights leaders that many conservatives blamed for the race riots of the 1960s. Schlafly was one of them and attracted Roy Wilkins of CORE and Martin Luther King, Jr. in many articles and books. She also had a problem with Jews as well, having worked with the anti-Semitic Liberty Lobby during these times. It seems she is not particularly letting up on her questionable stances on race either, and has said she has not wavered from any stance she has held in the past. Given that, it is not surprising she has had columns in the Council of Conservative Citizens (C of CC) rag the Citizens Informer, including one in the Spring 1991, about how the politics of integration destroyed St. Louis, another in the Spring 1992 edition against integration in St. Louis schools, and another one the following issue on her opposition to the pro-UN policy of former Soviet premier Gorbachev. The Eagle Forum has given awards to C of CC members Thomas S. Bugel and Shirley Walters Kiel, who were St. Louis School Board members. Bugel also is on the C of CC national board of directors while Kiel serves on the C of CC’s board of advisors. Schlafly, and the C of CC are both based in St. Louis. The Book TV appearance also revealed her support for racial profiling, a trend among conservatives since September 11.

Texas textbook publishers agreed to make changes at the request of Phyllis Schlafly’s Eagle Forum and Texas Citizens for a Sound Economy members, which will, for example, delete passages that describe Islam positively, eliminate scientific dates so as not to conflict with Biblical timelines, delete sections on other cultures, and eliminate critical thinking exercises that discuss social issues.  Here are some of the changes agreed to

Publisher agreed to CHANGE any references to events “millions of years ago” to instead read “in the distant past” or “over time” so as not to have ancient geological events predate Biblical timelines. (Glencoe/McGraw-Hill response to Robert Raborn, Texas Citizens for a Sound Economy, 8/23/02)

Publisher agreed to “eliminate the references to fossil fuels being formed millions of years ago” so as not to conflict with Biblical timelines. (Harcourt response to Margie Raborn, Texas Citizens for a Sound Economy, 8/23/02)

Publisher agreed to ADD text reading “Locke believed that God created people who all, equally, had certain rights. To deny people theses rights would be going against God….Thomas Jefferson added these ideas to the Declaration of Independence.” (Macmillan/McGraw-Hill response to Carl Schlaepfer, 9/11/02)

Publisher agreed to DELETE a sentence reading “[M]any other teachings in the Quran, such as the importance of honesty, honor, giving to others and having love and respect for their families, govern their daily lives.” which the critic called “more propaganda” for Islam. (Prentice Hall response to Margie Raborn, Texas Citizens for a Sound Economy, 8/23/02)

Publisher agreed to DELETE the passage “Al Qaeda’s leader, Osama bin Laden told his followers that it was a Muslim’s duty to kill Americans. No idea could be farther from Muslim teachings. The Quran, Islam’s holiest book, tells soldiers to ‘show (civilians) kindness and deal with them justly.’ ” in response to a critic who said “this is going to great length to put a positive light on Muslim teachings considering other passages of the Quran.” (Glencoe/McGraw-Hill response to Robert Raborn, Texas Citizens for a Sound Economy, 8/23/02)

Schlafly: Obama’s an Authoritarian Socialist Enemy of “Real Americans” And a Fake http://www.rightwingwatch.org/content/schlafly-obamas-authoritarian-socialist-enemy-real-americans-and-fake