The Education of Howard Buffett, Jr. - The Constantine Report
0 SHARES

The Education of Howard Buffett, Jr. 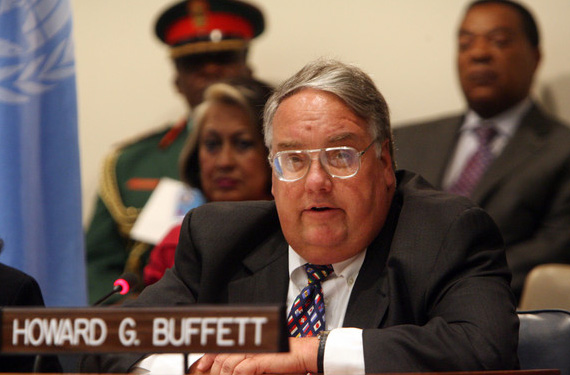 ... Howard Buffett, restless as a child and a bit of a troublemaker as a teen, found it difficult to deal with his dad's emotional distance: "I used to misinterpret his tone to mean that he didn't care about me," he told Roger Lowenstein, author of the unauthorised 1995 biography of Warren Buffett. "It's the exact same quality that makes him so good as an investor. There was no emotion in it."

As we drive through the lush equatorial landscapes of North Kivu, the subject of his father comes up regularly. Howard says his twenties were a little haphazard: school, a couple of colleges, a little bit of real estate work, "then I bought a bulldozer and dug basements which got me into farming".

At the age of 28, however, his Republican grandfather's spirit reared its head: reading a newspaper, he noticed that two local government positions had become vacant. He ran and won office as Republican county commissioner in Omaha. Howard was elected for a four-year term but ended up resigning just before it ended to join Archer Daniels Midland (ADM), America's biggest farm commodities processor. CEO Dwayne Andreas, credited with turning ADM into a global agricultural behemoth, was also one of the biggest political donors in US history. He gave to both Republicans and Democrats but will be remembered for contributing (illegally) $25,000 to Richard Nixon's campaign via the Watergate burglar, Bernard Barker. Buffett had deep misgivings about leaving political office prematurely but, at 37, was fascinated by Andreas and agreed to take a senior managerial position.

"It was one of those times that you don't know if you've made the right choice, but it turned out to be fantastic. ADM opened a whole new world to me.

"Have you heard of the movie The Informant?" he asks. (I read later that it stars Matt Damon, is set in Decatur, Illinois, where Buffett lives and tells the story of America's biggest price-fixing scandal.) He tells me of the day in June 1995, when FBI agents knocked on his door: "The company was apparently involved in a major price-fixing scandal. I'm there thinking, what are my duties? I am spokesman for ADM worldwide. I am in charge of all investor relations ? I share all the political duties."

The first interview lasted more than three hours. When it was over, he rang his father: "I said 'Dad, you're not going to believe what happened ? they have almost 400 agents out in the field interviewing several hundred ADM employees ? This is huge. Do you think I should resign?'

"And this is so classic of Warren Buffett. He doesn't say you should resign or you shouldn't resign. [Instead] he gives you a more important, key question to think about. He says to me: 'Only you can decide that. But you don't have more than 24 hours to make that decision'.

"And he was right. You are either in it or you are not in it."

Buffett made a gut call, went to work the following day and left at noon: "The pressure on me was unbelievable; that expectation that if you are not with us then you are against us – big-time corporate America putting the biggest walls around themselves. And dad was right; you are either in it or you are not."

Buffett went home to his wife and together they grappled with the fear that he had made the smartest – or the most stupid – decision of his career. It turned out to be the right call, but also the most difficult period of their lives. In the months that followed, the Department of Justice unearthed an international scandal. Three executives, including Andreas' son Michael, went to prison and in 1997 the company was fined $100m, the biggest anti-trust fine in US history.

It was also life-changing for the Buffett family. Howard Jnr, aged 11, had been in his father's den when the FBI agent arrived: "The first thing he said after the agent left was, 'Dad are you going to jail?' I told him no and then he asked me if anyone I work with or know was going to jail. I had to say, 'I don't know'. I'm sure that I was reassuring but think, what does that do to a kid?"

He may have appeared distant while the kids were growing up, but Warren Buffett's voice exudes paternal pride and affection when he talks of his eldest son now: "He has managed to blend this love of farming with his empathy for people who have gotten the short straws in life."

Howard's own experience being a dad has been vastly different. He and Howie Jnr have travelled together at least three times a year since his boy was 12: "Sometimes I felt that I pushed him to see too much. He was 15 years old when I took him to Bangladesh and there were people dying before our eyes. He became very uncommunicative. I said to Devon, 'I think I've pushed him too much'. But he talked to his mother and he was OK. He has this amazing sense of humanity."

Howie Jnr, who now works in the White House on the Domestic Policy Council, has completed the Republican-Democrat generational cycle of the Buffett family. He says travelling with his father was a fundamental formative influence on his life. ...

The Death and Life of Bernard Barker