Close Encounters of the Third Reich 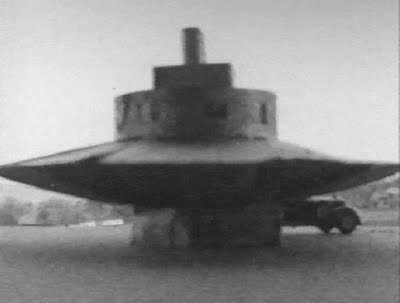 HITLER fantasised about creating a fleet of flying saucers capable of destroying London and New York as his armies retreated on all fronts.

New movie Iron Sky, due out next year, tells the story of Nazis escaping to the moon to regroup for a new attempt at world domination.

But after trawling through top secret Nazi archives, The Sun can reveal the truth about Hitler’s UFOs is far more chilling.

One alleged site of production of the Nazi UFOs is a series of tunnels buried under the Jonas Valley in Thuringia, central Germany. Here, under the command of SS General Hans Kammler, legions of slave labourers worked to bring the Fuhrer’s fantasies into existence.

The respected German science mag PM has reported how “advanced” the programme was as scientists toiled in secret factories to produce the “wonder weapon” to win the war. The magazine quotes eyewitnesses who saw a flying saucer marked with the German Iron Cross flying low over the Thames in 1944. “America also treated the existence of the weapons seriously,” it said.

The US believed Germany could use it to drop weapons on New York – a target the Fuhrer obsessed on as the war progressed. At the time the New York Times reported on a “mysterious flying disc” with photos of the device seen travelling at extremely high speeds over the city’s high-rise buildings.

“Apparently that machine was capable on its maiden flight of travelling 2,000km,” added the PM report. “The Germans had destroyed much of the paperwork of their activities but there are numerous hints that it did indeed exist.”

This is the latest revelation about odd UFO activity. Two weeks ago we told how 8,000 cows were snatched by mystery aircraft then dropped from the skies in the US.

The Nazi UFO project was driven by engineers Rudolf Schriever and Otto Habermohl and was based in Prague between 1941 and 1943. Initially a Luftwaffe project, it eventually fell under the control of armaments minister Albert Speer before being taken over once again in 1944 by Kammler.

Eyewitnesses captured by Allies after the war claimed to have seen the saucer fly on several occasions.

Joseph Andreas Epp, an engineer who served as a consultant to the Schriever-Habermohl project, claimed 15 prototypes were built. He described how a central cockpit surrounded by rotating adjustable wing-vanes formed a circle. The vanes were held together by a band at the outer edge and were set in rotation by small rockets placed around the rim.

Once rotational speed was sufficient and lift-off was achieved, horizontal jets or rockets were ignited.

A German official recorded that at the Prague-Gbell aerodrome in September 1943, he saw inside a hangar “a disk 5-6 metres in diameter. Its body is relatively large at the centre.

“Underneath it has four tall, thin legs. Colour: aluminum. Height: almost as tall as a man. Thickness: some 30 to 40cm. Along with my friends, I saw the device emerge from the hangar.

“It was then we heard the roar of the engines, we saw the external side of the disk begin to rotate and the vehicle began moving slowly and in a straight line toward the southern end of the field. It then rose almost one metre into the air. After moving around some 300 metres at that altitude, it stopped again. Its landing was rather rough. Later, the ‘thing’ took off again, managing to reach the end of the aerodrome this time.”

The theory is further fuelled by Igor Witkowski, a Polish journalist and historian of military and aerospace technology.

In his 2000 book, Prawda O Wunderwaffe, he claims Hitler wanted his top scientists at his disposal to work on bell-shaped aircraft. So impressive was Nazi technology found at the end of the war, V-2 rocket scientists were hunted down by the US and Soviets and hired for their own missile and space programmes. More than 120 rocket scientists, including Wernher von Braun who became a central figure at NASA, went to the US.

German engineer Georg Klein claimed two types of flying disks had been created by the Nazis:

A non-rotating disk developed by V-2 engineer Richard Miethe, was captured by the Russians.

Klein claimed he saw this craft’s first manned flight in February 1945 when it climbed to 40,700ft and reached 1,400mph. Klein, who went on to have a distinguished postwar career as an aeronautical engineer, said: “I don’t consider myself a crackpot or eccentric or someone given to fantasies. This is what I saw, with my own eyes – a Nazi UFO.”

British and American bomber crews also reported strange sightings over enemy territory. They reported seeing objects that were neither aircraft nor ack-ack fire and described them as “fiery” and “glowing red, white, or orange”.

Were these the test flights of the disks meant to unleash terror on Allied cities? But if so where were they flying from?

Jonas Valley is where the secret work is believed to have been carried out. Now officially sealed off, authorities play a cat-and-mouse game with UFO hunters there each weekend.

Captured by the Americans, its secrets were placed under lock and key for 100 years.

Conspiracy theorists believe the Americans found two things in the tunnels – a nuclear bomb and the flying saucers meant to deliver it. Martin Stade, author of a book on the area, claims 174 flying saucers were developed at the site. He continues to search the tunnels illegally but hasn’t yet found them. He said: “Research in Third Reich archives points to a secret factory in the Jonas Valley complex.

“Why else would the Americans take away everything they found and place the results under a 100-year secrecy order?” 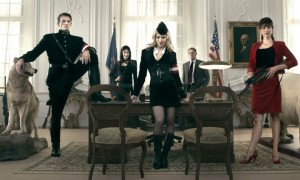