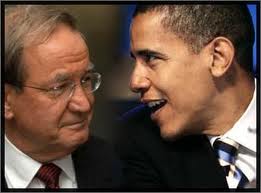 (ChattahBox US News)—MSNBC contributor and resident bigot Pat Buchanan has penned yet another vile race-baiting screed on the pages of the right-wing birther website WorldNetDaily. This time around, Buchanan explores eugenics and “The racial gap in education.” While relying on a notorious White Supremacist website to make his point, Buchanan predictably concludes that our public schools are being destroyed by the inferior brain power of Hispanic immigrants and blacks. Now, if we could just restrict our public schools to whites and Asians and push the rest “out the door” like in the good ol’ days “of the 1940s and 1950s,” reasons Buchanan then we would solve America’s educational problems.

Why does MSNBC continue to ignore Buchanan’s race-baiting and bigoted xenophobia and keep him on the air as a frequent contributor?

Buchanan, by citing White Nationalist Steve Sailer of VDARE.com, a racist anti-immigration website, is certainly not being subtle about his beliefs. VDARE has been designated as a hate group by the Southern Poverty law Center.

Media Matters’ Jamison Foser writes, “I know, there’s there’s something of a dog-bites-man quality to learning that Pat Buchanan reads a rabidly anti-immigrant website. But Buchanan continues to enjoy the favor (or at least acceptance) of a not-insignificant portion of the media elite, so the fact that he apparently browses a white nationalist site for column ideas is worth noting.”

Who is this Steve Sailer that Buchanan gives so much credence to?

“Steve Sailer has been an advocate of the Pioneer Fund, which has been designated a hate group by the Southern Poverty Law Center for its support for white supremacists. Sailer has written that African Americans “tend to possess poorer native judgment than members of better-educated groups. Thus they need stricter moral guidance from society,” a passage conservative columnist John Podhoretz aptly described as “shockingly racist.”‘

Let’s take a look at some passages from Buchanan’s latest racial screed, as he also cites VDARE contributor Robert Weissberg’s book “Bad Students, Not Bad Schools,” to make his point.

“Steve Sailer of VDARE.com got the full list of 65 nations, broke down U.S. reading scores by race, then measured Americans with the countries and continents whence their families originated. What he found was surprising.”

Buchanan reasons that there is noting wrong with our public schools. The problems lie in what he calls the intellectual disparities of the “racial divide.”

“They are educating immigrants and their descendants to outperform the kinfolk their parents or ancestors left behind when they came to America. America’s schools are improving the academic performance of all Americans above what it would have been had they not come to America.” [...]

“We do not know how to close the gap in reading, science and math between Anglo and Asian students and black and Hispanic students.”

Quoting Weissberg Buchanan writes, “America’s educational woes reflect our demographic mix of students. Today’s schools are filled with millions of youngsters, many of whom are Hispanic immigrants struggling with English plus millions of others of mediocre intellectual ability disdaining academic achievement.”

So you see, the mediocre brains of Hispanic immigrants and other non-white students are responsible for our nation’s low test scores, according to Buchanan

“If the brains and the will to learn are absent, no amount of spending on schools, teacher salaries, educational consultants or new texts will matter,” writes Buchanan.

This is just the latest in a series of outwardly racist WND columns from Buchanan, invoking social wedge issues to stoke racial resentment. In October, Buchanan attacked the social safety net for the poor and unemployed, particularly food stamps, arguing that poverty doesn’t exist in America because the poor have not resorted to cannibalism.

In May, Buchanan railed against too many Jews serving on the U.S. Supreme Court. And last year, Buchanan attacked Supreme Court Nominee Sonia Sotomayor, our first Latino Justice, as someone “…whose career bespeaks a lifelong resolve to discriminate against white males to the degree necessary to bring about an equality of rewards in society.”

The fact that MSNBC continues to employ Buchanan as a respected political analyst is a discredit to the network.