Mayo and Bolivia: The Fascist Link

” … several of those who worked, and may still work as ‘security’ at the Shell compound, are high ranking members of fascist organisations. One such man, Tibor Rozsa, was a commander of the Szekler Legion, a paramilitary fascist group in Romania. … “ 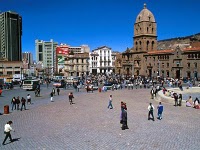 For the last eight years the local communities in Rossport and Glengad, County Mayo have been resisting petro-chemical giant Shell’s plans for a high-pressure gas pipeline from the offshore gas fields to an online refinery at Bellanaboy. The project is a significant health and safety risk in the medium term, as admitted by Shell’s own engineers at a recent local forum examining the project. It already has caused high levels of aluminum pollution of the local water supply.

However, there is another clear danger to the local community above and beyond the effects of the pipeline and refinery. It is the direct and physical risk of harm from the privatised “security” force hired by Shell to quell effective opposition by campaigners. That company is Integrated Risk Management Services (IRMS), with a head office in Naas, County Kildare.

IRMS and its owners Terry Downes and James Farrell are on very good terms with the Fianna Fail Party, as they did the security for the “Champaign Tent” at the Galway Races. They also have many state contracts for events such as the recent Africa Day celebration in Dublin. So these men get a lot of our taxes directly into their pockets.

You have to wonder what the organisers of Africa Day make of the fact that IRMS employees have links with racist and fascist groups. Recently it has been discovered that several of those who worked, and may still work as ‘security’ at the Shell compound, are high ranking members of fascist organisations. One such man, Tibor Rozsa, was a commander of the Szekler Legion, a paramilitary fascist group in Romania.

Rozsa was one of three people shot dead earlier this year by the Bolivian government in what seems to have been a plot to start a civil war in the country. Irish man Michael Dwyer was one off those killed, and had worked with Rozsa at Shell’s compound in Mayo with IRMS. It’s worth noting that less that a year before the shootings, the Bolivian government nationalised a pipeline ‘owned’ by Shell. IRMS deny any direct involvement in the plot, but major questions remain.

How can a company that has many security contracts from the Irish State get away with hiring fascist thugs? How is it that these fascists can openly sell badges on the internet ‘celebrating’ the fact that they are involved in trampling over a local community and international campaign, and regularly assaulting local community activists or filming families and children when they are on the beach.

And just why was it that as soon as news broke of the deaths of former IRMS employees, who worked at the Shell compound in Mayo, that IRMS suddenly pulled the plug on their own website?

Maybe we should ask Terry Downes and James Farrell. They are the owners of, and make profits from, IRMS. As such have no interest in seeing a resolution to the conflict in west Mayo. The longer it drags out the more money it is for Terry and James.

Previous Article
Humor Section: “Tom Kean wants to Develop Generation of Leaders who Trust Each Other”
Next Article
Point-Counterpoint: The “Russian” Influence on My Site

Point-Counterpoint: The “Russian” Influence on My Site
Jul 21