” … While Republicans like Barbour blame Obama for higher gas prices – pointing to the Gulf drilling moratorium – the numbers show that U.S. domestic oil production has actually risen to its highest level since 2002. … “ 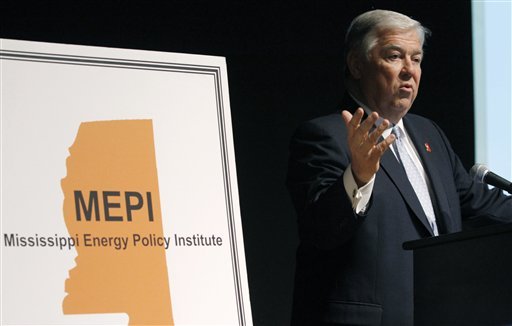 Gov. Haley Barbour (R-MS), former RGA Chair and lobbyist, has gone on the attack. In a speech to the Chicagoland Chamber of Commerce today, he accused President Obama of purposely trying to drive up the price of oil, saying that “the Obama energy policy basically boils down to this: increase the price of energy so Americans will use less of it. That’s an environmental policy, not an energy policy.” But it’s nothing new for Barbour. Last week he claimed Obama’s energy policies “are working – pushing gas prices near $4.” And a few weeks ago, he attacked the administration and its energy policies, claiming they “have been designed to drive up the cost of energy.” The AP was quick to point out the glaring fallacy in that statement – that Middle East turmoil is the primary factor in rising gas prices, not Obama’s policies.

But it shouldn’t come as much of a surprise that Barbour continues to shill for the oil and gas industry. Barbour raised significant amounts in campaign contributions from the industry, and from 1999 to 2003, was a lobbyist for various energy interests. Even as oil was touching Mississippi shores in the summer of 2010, Barbour downplayed the effects of the catastrophic spill. A ThinkProgress review of IRS documents revealed that with Barbour at the helm, the RGA received over $5 million in contributions from the oil and gas industry – including four of the Big Five oil companies – in just one year:

Further, while Republicans like Barbour blame Obama for higher gas prices – pointing to the Gulf drilling moratorium – the numbers show that U.S. domestic oil production has actually risen to its highest level since 2002.

Even with increased domestic production, the Financial Times reports that the rise “would still not be enough to end America’s dependence on imported oil.” And a 2009 report from the Energy Information Administration found that offshore drilling would have an “insignificant” impact on prices at the pump.

But while Americans continue to pay higher prices for gas, oil-funded Republicans protect generous subsidies to oil companies. And fluctuations in gas prices in the past few years have shown that when gas prices increase, so do Big Oil’s profits.