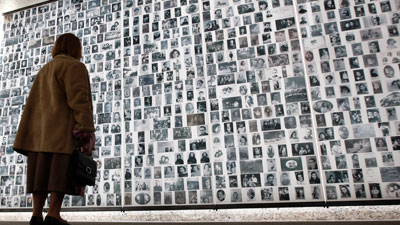 The legislation, which was introduced last week in the State House and Senate, is clearly aimed at the French rail company known as SNCF. The operation, via its subsidiary Keolis, is likely to soon bid again to run two lines of the Maryland Area Regional Commuter train service.

Keolis submitted a bid last July to the Maryland Transit Administration for a new five-year deal last, but the MTA canceled the bidding in the same month, saying the offer had not attracted enough competition. Bidding is expected to open again in the coming months, and both Keolis and CSX are likely competitors for the deal. CSX currently has the contract, which ends in 2012.

SNCF was paid per head, per kilometer to transport European Jews, as well as American and Canadian prisoners of war, for the Nazis. Critics say that since the war, the company has refused to apologize for its actions.

The company has defended itself by saying its employees were under the control of the occupying Nazi forces. SNCF has posted material on its website claiming that “many railway workers took part in the French resistance.”

In addition, SNCF President Guillaume Pepy last week officially ceded a former industrial train station and patch of muddy rail lines to the northern Paris suburb of Bobigny so the area can be made into a memorial for Jews deported from there.

Critics say such action -- after 10 years of fighting the company to acknowledge its role in the Holocaust -- is only being undertaken now to gain U.S. contracts.

“SNCF’s refusal to fully acknowledge its role in the Holocaust and its recent attempt to rewrite history is insulting to its victims and deeply troubling,” state Sen. Joan Carter Conway, the chair of the Education, Health, Environmental Affairs Committee said in a statement. “It is my intention to join with legislators in California to hold any company seeking taxpayer funds to the highest levels of responsibility and corporate ethical standards."

The California Legislature passed a bill similar to the proposed Maryland one, but the measure was vetoed by Gov. Arnold Schwarzenegger.

The Maryland bill would in part require any entity and its majority owners pursuing a procurement contract with the Maryland Department of Transportation to provide train service to disclose what, if any, activity it undertook in the deportation of individuals to extermination camps or death camps during the period between Jan. 1, 1942 and Dec. 31, 1944. It also asks those companies to disclose any records it has in its possession and whether it has ever provided restitution or reparations.

SNCF is facing other roadblocks as it tries to expand in the American market. In the last year alone, 269 Holocaust survivors publicly criticized the Virginia Railway Express for awarding an $85 million contract to Keolis; SNCF faced legislation on Capitol Hill to allow Holocaust survivors and others to sue it; Jewish and non-Jewish groups protested when SNCF bid for a $2.6 billion high-speed rail contract in Florida.