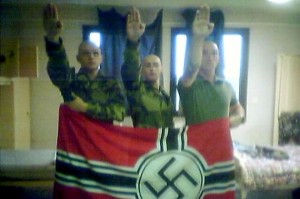 A murderous gang of neo-Nazi ex-soldiers was being hunted last night after three children and a teacher were shot dead outside a Jewish school in France.

Anti-terror squad detectives believe the killings were carried out by the same band of fanatics who executed four North African troopers from an elite French parachute regiment in two separate drive-by shootings last week. They say the same .45 calibre weapon and the same stolen scooter were used in all three attacks.

In the latest atrocity, the killer – dressed in black leather and wearing a helmet – screeched to a halt outside the school and opened fire as youngsters were being dropped off by parents at around 8am. The horrific bloodbath, in a normally quiet suburb of Toulouse, in the south west of the country, stunned France.

President Nicolas Sarkozy called a national day of mourning and pledged no stone would be left unturned in the hunt for those responsible.

Police had thought they were dealing with a lone extremist opposed to France’s military involvement in Afghanistan. But now their investigation is centred on a group of at least three renegade soldiers from the same regiment who were kicked out of the French army in disgrace. They were discharged in 2008 for allegedly having neo-Nazi links – after pictures were found showing them posing in front of a flag emblazoned with a swastika.

The victims of yesterday’s shooting at the Ozar Hatorah college in Toulouse were named last night as rabbi Jonathan Sandler, 30, his two sons Aryeh, three, and Gavriel, six, and Miriam Montenago, eight – the daughter of the headteacher. Mr Sandler, who had dual Israeli-French nationality, taught religious studies at the school having emigrated from Israel with his family last year. Police said all the pupils and teachers were identifiable as being Jewish because they were wearing traditional skullcaps.

The killer’s scooter made it easy for him to make his getaway, snaking through the winding streets of the medieval city, where a car would find it difficult to follow. President Sarkozy visited the scene yesterday and described the carnage as a “national tragedy” and an “abominable crime”. He added: “The savagery, the cruelty cannot win. Hate cannot win. The nation is much stronger."

Toulouse prosecutor Michel Valet said: “The gunman shot at everything he could see, ­children and adults, and some children were chased into the school before he fled on a black scooter.”

Five other people were injured, including a 17-year-old student who was last night fighting for his life.

The father of one pupil fought back tears as he said: “I saw two people dead in front of the school, an adult and a child. Inside, it was a vision of horror… the bodies of two small children.

"I didn’t find my son. He had fled when he saw what happened.” His voice cracking with emotion, he added: “How can they attack something as sacred as a school, attack children only 60 centimetres tall?”

Nicole Yardeni said: “We saw the corpses, we saw the blood and we saw the bullets. It’s a huge shock.”

Another witness, Franck Califa, said: “For now, I have only tears. I’m in shock. I didn’t think things like this can happen. I held one victim in my arms.”

Police said the gunman initially tried to use a different gun after riding up to the school on his scooter, believed to be a Yamaha T-Max, but switched to the .45 calibre weapon when it jammed.

The drive-by shootings began on March 11 when a 30-year-old off-duty soldier, originally from Martinique, was killed by a scooter gunman in Toulouse. Then, last Thursday, a black-clad rider drew up and opened fire on three soldiers as they withdrew money from a cashpoint outside their barracks in Montauban, about 30 miles outside Toulouse. Two paratroopers died at the scene and a third died later in hospital. All three were shot in the head, execution-style. One of them, Abel Chennouf, was about to be married.

Sixty police were involved in that inquiry after a witness, identified only as Martine, got a glimpse of the gunman’s face. She told how she was just coming out of a nearby shop when she heard the shots.

She said: “I saw the gunman as he was getting away. His visor was lifted up and I looked into his eyes. He had a tattoo on his face, of that I am sure.”

Following the attacks, military chiefs ordered all soldiers to wear civilian clothes when away from their bases. France has around 8,000 troops deployed in Afghanistan and has received several terrorist threats because of its involvement.

France’s chief rabbi Gilles Bernheim said he was “shell-shocked”. He added: “I am utterly horrified by what happened in Toulouse this morning which has wounded my body and soul.”

Toulouse is the fifth largest city in France and has a large British expatriate community, many of whom have second homes in the surrounding countryside. Neo-Nazi organisations are banned in France, but the far right has been a presence since the end of the Second World War – both in the military and increasingly at the ballot box. When Algeria began seeking independence, senior French officers formed the Organisation of the Secret Army, which carried out a series of terrorist attacks.

The eight-year campaign culminated with an assassination attempt on President Charles de Gaulle in 1962, made famous in the fictionalised account The Day of the Jackal.

The OAS still has followers among French far right supporters and veterans of the Algerian war and many believe the recent shootings are to mark the 50th anniversary of the accord that ended the eight-year war of independence.