France is glossing over the collective shame of collaboration in celebrations to mark the 70th anniversary of Charles de Gaulle’s appeal to resist Nazism, a leading historian has claimed. 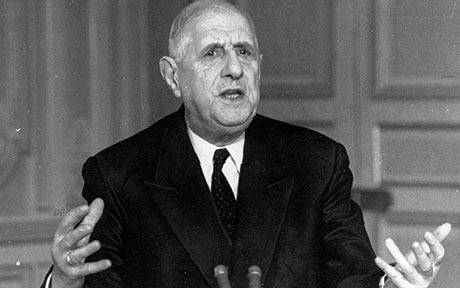 According to Jean-Pierre Azéma, the fervor around the anniversary risks talking up the achievements of Charles de Gaulle, pictured, when the real man of the hour was Winston Churchill. Photo: AP

Jean-Pierre Azéma, a respected author of more than a dozen works, said he was concerned that inconvenient truths about France’s wartime past were being played down amid a surge of patriotism around de Gaulle’s June 18, 1940 appeal from London.

He said the fervour around the anniversary risked talking up de Gaulle’s achievements when the real man of the hour was Winston Churchill.

“History is being used as a political tool in a kind of national story-telling,” said Mr Azéma, adding that the vast majority of French had little regard for the wartime General de Gaulle when he launched his appeal on BBC radio – a day after Philippe Pétain, a French general, had announced an armistice with the Nazi invaders.

Dozens of events are being held across France this week to remember the appeal, in which de Gaulle declared: “Whatever happens, the flame of the French resistance must not and will not be extinguished.” On Friday, President Nicolas Sarkozy will visit London to mark the anniversary and attend a ceremony at the Mont Valérien memorial to the French Resistance near Paris.

In London, he will visit the BBC’s studio B2, where de Gaulle made the appeal, and his wartime offices, before meeting the Prince of Wales and David Cameron, the Prime Minister.

But Mr Azéma said the French public must be reminded that de Gaulle’s revered appeal went almost unnoticed at the time and that he was not seen as a saviour by the vast majority of the population.

“De Gaulle then was seen as an emigrant, a divisive figure who had left France,” said Mr Azéma. “The man of the hour was Pétain,” a First World War hero of Verdun. After he announced the surrender, he was voted in as head of state by the French parliament to make peace with Germany. But after the war he was branded a collaborationist traitor and was imprisoned for life.

“Very few people heard [de Gaulle’s] appeal because millions of French refugees were fleeing in exodus. On the road, they had other things to do than listen to the BBC,” he said. De Gaulle’s call to arms was lumped in with other news in a few provincial newspapers.

Pétain on June 17, 1940, announced the French surrender in his broadcast, saying: “It is with a heavy heart that I say to you today that the fighting must stop.”

His decision was welcomed with relief by a majority of the French.

The same day that Pétain announced surrender, de Gaulle was in London to meet with Churchill, who was, according to Mr Azéma, the true decision-maker and “man of destiny”.

“De Gaulle became a man of history because one man chose him, gave him access to the BBC and overcame resistance from the war cabinet and that man was Churchill,” he said.

Previous Article
‘Agent Orange has Given Me a Death Sentence’
Next Article
J.T. Ready’s Neo-Nazi Patrol for Migrants in the Vekol Valley