" ... Young Georges Remi (the future Hergé) got his start working for Norbert Wallez, a Catholic priest and newspaper editor who admired Mussolini. ... During the war, Hergé worked for one of the Nazis' puppet newspapers, and after it he never apologized for his activities or his politics ... "

Wikipedia: "The Adventures of Tintin (Les Aventures de Tintin) is a series of comic strips created by the Belgian artist Georges Rémi (1907–1983), who wrote under the pen name of Hergé. The series first appeared in French in Le Petit Vingtième, a children's supplement to the Belgian newspaper Le Vingtième Siècle on 10 January 1929. The success of the series saw the serialised strips collected into a series of twenty-four albums, spun into a successful magazine and adapted for film and theatre. The series is one of the most popular European comics of the 20th century, with translations published in over 50 languages and more than 200 million copies of the books sold to date." 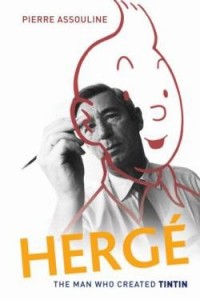 My first encounter with Tintin was in the pages of Children's Digest. I had no idea that the hero was Belgian – I would have been hard-pressed to say what or where Belgium was. Nor did I know that the man behind the cartoon had once been a Nazi collaborator. What I did know was that Captain Haddock was my kind of guy and that Snowy could always be counted on to save the day. Tintin himself I was less sure about: Why, I kept wondering, would any self-respecting boy choose to wear plus-fours?

Forty years later, and Tintin is just as popular as ever, so much so that people are still writing about the man who created him. So why read this particular biography? It is not the first of its kind (when Hergé was first published, in 1996, there were already several perfectly good biographies on the market). It is not even the first such book to be published this year (Serge Tisseron's Tintin et le secret de Hergé came out in June). And in a few months' time, next March to be exact, the Hergé Foundation's Philippe Goddin will be coming out with the newest instalment in his ongoing series on Hergé.

What distinguishes this biography from the competition is the unfettered access Assouline was granted to Hergé's private correspondence. Why Goddin authorized and even encouraged this is unclear. A journalist with a penchant for biographies, Assouline had already written an exposé of another Belgian who had done very well under the Nazis, novelist Georges Simenon, and in giving Assouline carte blanche Goddin had to have known that Hergé's own record would also come under close scrutiny.

The facts are damning. Young Georges Remi (the future Hergé) got his start working for Norbert Wallez, a Catholic priest and newspaper editor who admired Mussolini. The children's supplement Hergé illustrated, Le Petit Vingtième, routinely published anti-Semitic diatribes, while Hergé gave one of his early villains, American financier Blumenstein, an unmistakably Jewish name. During the war, Hergé worked for one of the Nazis' puppet newspapers, and after it he never apologized for his activities or his politics, saying only that he might have done things differently had he known of the death camps.

Nor does Hergé's personal life hold up under scrutiny. His staunch Catholicism did not keep him from having numerous affairs, or from ultimately leaving his wife for a younger woman. He refused to give his assistants credit for their work, saying it was enough to pay them. And while he set himself the goal of inculcating his young readers in “orthodox Christian principles,” he neither liked children nor knew how to behave around them. On one occasion, he lodged a noise complaint against the schoolchildren who played outside his studio. On another, he adopted a little boy, only to send him back to the orphanage two weeks later. The noise interfered with his routine, he said.

Women were yet another sore point. Asked to name his favourite heroine, he fumbled for an answer – nurses, the Sisters of the Poor, “all the anonymous women who devote their lives to relieving the suffering of others.” He rarely included women in his cartoons, and the few who stand out do so for the wrong reasons. Bianca Castafiore of The Castafiore Emerald is overbearing and brassy. The wife of General Alcazar is simply scary.

If there is little to admire in Hergé the man, there is a great deal to admire in Hergé the biography, starting with its even-handed treatment of a difficult and badly behaved artist. A seasoned biographer, Assouline neither spares nor demonizes Hergé. Nor does he let us forget that Hergé's sins were in many ways those of his troubled country. If he harboured reactionary views, if he prospered under the Nazis and experienced little or no remorse, so too did many of his compatriots. And like Hergé, many went on to have brilliant careers, including, most notably, the late Paul de Man.

The result is a sophisticated and revealing study of a man and his times. That it reads so well in translation is of course a tribute to the translator (Charles Ruas), but it also suggests that the original is itself exceptionally well written. The book's one flaw lies not in its text but rather in the complete absence of photos and illustrations. This is an understandable omission (the standard book contract makes authors responsible for purchasing the copyrights to illustrations), but it is unfortunate in a book about one of the great graphic artists of the 20th century.