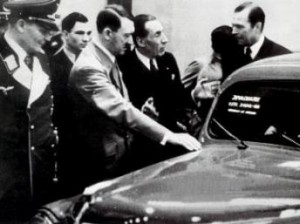 A Paris court has rejected a bid by heirs of the founder of French carmaker Renault to be compensated for the nationalisation of the company at the end of World War II when their grandfather was dubbed a Nazi collaborator.

The court rejected a challenge to the 1945 nationalisation under a new judicial procedure that allows plaintiffs to challenge the constitutionality of legislation. They claimed that the state takeover was a "violation of fundamental legal and property rights".

The seven grandchildren of founder Louis Renault said they would appeal against the decision.

Louis Renault founded Renault with his brothers in 1898. During the Nazi occupation the company was placed under German control and made equipment for German forces, leading to allied planes bombing its factories. He died in jail shortly after Paris was liberated from German occupation, before he could be tried for collaboration. The firm was nationalised and the French state remains the biggest single shareholder.

One of the lawyers opposing the heirs’ bid, Jean-Paul Teissonnière, dubbed their move "revisionist” and said he was amazed by their nerve in pressing their case.

"A very large majority of Renault's production went to the enemy," Teissonnière told the court. The company did not assist the French Resistance, he added, nor did it "ask its workers to sabotage" production. We are dealing with a revisionist discourse, because we are being asked to rehabilitate someone who saw his goods confiscated for collaborating with the enemy," Teissonniere said.

The heirs' lawyer, Thierry Levy said the revisionism charge was an "outrageous accusation" and that the lawyer could be sued for defamation if he were not speaking in court.

Louis Renault’s heirs have aroused controversy by fighting for his rehabilitation recently.

Renault’s Boulogne-Billancourt factory was the scene of major strikes and factory occupations in the 1930s, when trade unions, backed by the Communist Party, pushed for shorter working hours and other improvements in working conditions.

The German takeover took place when Renault was in the US where he had been sent by the government to ask for tanks, although he had met Hitler in 1939 to solicit German arms contracts before the war broke out.

His nephew by marriage, François Lehideux, who was part of the company’s higher management and served in Philippe Pétain’s collaborationist Vichy government, oversaw the takeover.

Louis Renault’s defenders claim that he was the victim of a vindictive campaign by left-wing résistants after the German withdrawal, going so far as to suggest his death was brought on by harsh treatment in jail.

In 2010, at his family’s request, a court ordered a museum to take down a photo of him showing a prototype of a tank to Hitler and Göring taken in 1939 on the grounds that it was taken before war broke out and thus unfairly implied collaboration.

Their opponents, who accuse them of rewriting history with the complicity of some journalists and judges, will be pleased by Wednesday’s judgement, which although the court ruled on a question of law rather than one of history.