" ... The men 'hunted and shot at anything that moved,' only leaving when there was no one left to shoot. ... In the same year as the massacre, Papon, who would years later be tried for signing the orders that sent thousands of French Jews to their deaths in Auchwitz, earned France's highest accolade. ... " 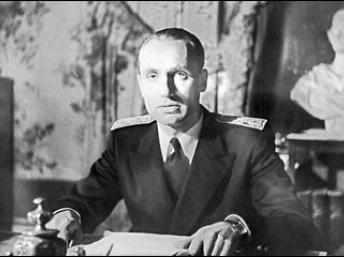 Each day, as throngs of people cross the St Michel bridge that joins Notre Dame cathedral with Paris’s bustling Latin Quarter, they pass by a nondescript stone plaque. They may not notice it, but its simple inscription is a stark reminder of one of the blackest days in modern French history - 17 October 1961.

It was the late evening and thousands of anti-war Algerian protesters had gathered at a number of Paris landmarks to stage demonstrations against a curfew imposed on them earlier in the month by the city’s police chief.

They were beaten, rounded up en masse and murdered by French police officers who had been assured they would be protected from prosecution. The cops were acting under the orders of their boss, Maurice Papon.

But the facts of the day are as obscure as that plaque on the bridge to many French people.

"In France, the facts surrounding October 1961, on the night of the 17th, and the continued repression of women and children are not widely known,” says Algerian-born author and professor of north African history, Benjamin Stora. “People are not aware of it, and it’s not included in the school curriculum.”

A massacre in central Paris would be unthinkable today. To put 1961’s events in context, they took place on the cusp of Algerian independence. It was a time of violent exchanges between the French police and the Paris wing of the guerrilla Algerian National Liberation Front (FLN) movement, which was fighting to liberate Algeria from French colonial rule.

And Papon, better known for his role as a Nazi collaborator, was in the frontline.

Following the killing of some 20 Parisian police officers in the three months preceding the massacre, Papon was livid. He was determined to hunt down the FLN members responsible and disable the group for good.

Part of his strategy was an 8.30pm to 5.30am curfew on Algerians in the greater Paris region. A separate ploy was the systematic raiding of Algerian communities in search of the perpetrators. Five Algerians, reported to have had nothing to do with the FLN, were executed.

Papon even publicly warned that French police would respond with “10 blows to every Algerian blow”.

It was these measures that spurred Paris’s Algerian community into action. So when the FLN called families into the streets, in defiance of the curfew, about 30,000, many of whom were French citizens, answered the call.

Why me? Why am I the scapegoat? ... They've made no effort to find the people responsible for these operations ... Why am I the one who has been picked out?

Men, women and children converged on the boulevards of central Paris, in places such as Saint Germain-des-Prés, Opéra, the Grands Boulevards, Place de la Concorde, the Champs-Elysées and even in the north-west at La Défense and beyond to Neuilly.

They were met by the brute force of 1,658 armed police and security personnel. 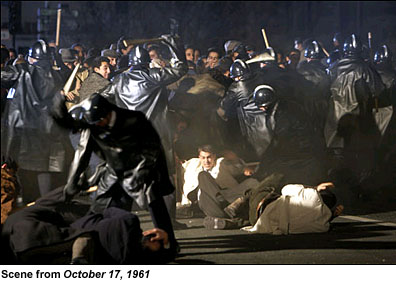 Thousands were rounded up, crammed into waiting buses and dispatched to holding centres. Following the massacre, the mutilated and disfigured bodies of Algerians were found dumped in the river Seine.

In 1998, police officer Raoul Letard gave a harrowing eyewitness account of the night’s events to France’s Institute for Studies on National Defence. He told of how, on 17 October, his unit crossed the Pont de Neuilly, into the suburbs of Colombes, where from about 11pm they engaged in a murderous two-hour search.

The men “hunted and shot at anything that moved”, only leaving when there was no one left to shoot.

“We were waging war, and our adversary had been named as the Algerians,” Letard recounted.

Official FLN figures say that as many as 300 Algerians were massacred that night. So, with so much obvious bloodshed, how could such a crime have come to pass? Did ordinary French people turn a blind eye?

It is important to take into account the atmosphere at the time, according to Professor Martin Evans, author of Algeria, Anger of the Dispossessed.

“There had been a lot of tit-for-tat violence between the FLN and French police, so certainly in Paris there was an air of violence,” Evans says. “Algerians were seen by large numbers of French as a threat, and as an enemy. Algerian areas of Paris, in the outskirts particularly, in the shantytowns, were places to be avoided.

“However, afterwards there was a reaction by intellectuals like Jean-Paul Sartre and Claude Bourdet on the left, protesting against the repression of Algerians.”

“The police waited for the Algerians to come up out of the métro stations, made them stand still with their hands above their heads, then hit them with truncheons,” de Beauvoir wrote.

“Corpses were found hanging in the Bois de Boulogne, and others, disfigured and mutilated, in the Seine. Ten-thousand Algerians had been herded into the Vél d’Hiv [stadium], like the Jews in Drancy once before.

“Again I loathed it all - this country, myself, the whole world.”

French authorities have been reluctant to investigate events the events of 17 October and it was only in 2001 that the state actually recognised that a massacre occurred.

As late as 1998, it seems, France was going to great lengths to let sleeping dogs lie. 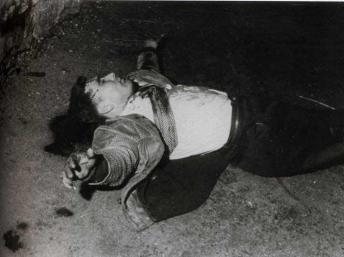 According to Reporters Sans Frontières copies of the 17 October edition of the Algerian newspaper Liberté were confiscated by police when they arrived at Lyon airport.

Why? Contained in their pages was an article by Algerian journalist Hakim Sadek entitled "When the Seine was full of bodies."

The campaign against Algerians in France is something that has, to a large extent, been rubbed from the collective French consciousness, historian Benjamin Stora believes.

"The Algerian war is a sequence of history that that French society has never come to terms with,” he says. “It’s a sequence which is almost hidden, but which is slowly returning to the surface of our memory largely through cinema.”

Gillo Pontecorvo’s 1966 Bataille d’Alger is perhaps the best-known film on the war. This year Rachid Bouchareb’s Hors-la-loi (Outlaw) sparked demonstrations because it dealt with massacres by French troops in Algeria.

In the same year as the massacre, Papon, who would years later be tried for signing the orders that sent thousands of French Jews to their deaths in Auchwitz, earned France's highest accolade: he was personally awarded the Legion of Honour by then-president Charles de Gaulle.

How could that happen? Evans says this is a very difficult question to answer.

“Certainly, from de Gaulle’s point of view, he was very interested in maintaining law and order and he wanted to recognise the work that had been done by Papon - both in France and Algeria,” Evans says.

“It’s important to remember his [Papon’s] history already in Algeria, where he had been involved in counter-insurgency work in the eastern part of the country in 1956 and 1957. In many respects, this was a laboratory for the way in which he dealt with the FLN in Paris in 1961.”

The massacre in fiction

Two French novels touch on the massacre. Both have been made into films.

Claire Etcherelli's Elise ou la vraie vie (1967) tells the story of a French girl who falls in love with an FLN cadre who disappears during a police crackdown.

Didier Daennickx's Meurtres pour mémoire (1988) is a crime novel which links a 1980s murder to a death during the 1961 massacre.

And what of the parallel drawn by de Beauvoir to many French officials’ collaboration with the Nazi persecution of the Jews? Thousands of Algerians were detained in the Vélodrome d’Hiver, known as the Vél d’Hiv, a cycle-racing stadium in Paris’s 15th district, close to the Eiffel Tower. As de Beauvoir remarked, some 16 years earlier French Jews were interned in the same venue.

“In terms of the arithmetic there is a connection,” says Evans. “But I think the connection is really about the repressive systems that were put in place by the French in terms of policing populations that they considered to be either alien or a threat to the nation state.

“This meant there was always a pattern which they followed through, and this was the rounding up and the use of the Vélodrome d’Hiver, which was ideal to put together and intern a large number of people.”

Nobody has been prosecuted for atrocities committed during the Algerian War of Independence and Stora says that, although there have been reports and inquiries, there are no legal avenues in France for bringing the perpetrators of such crimes to account.

“The massacre has gone unpunished like everything that happened in the Algerian War,” Stora says.

“A law was adopted in France in 1962 - at the time of independence - that gave an amnesty to all the acts relating to the Algerian War. So everything that was done, all that was committed during the war between 1954 and 1962, was given amnesty.”

Despite this, on the 40th anniversary of the massacre, an official, if controversial, reminder was unveiled on the Pont St Michel by Paris Mayor Bertrand Delanoë.

The plaque simply reads, “In memory of the numerous Algerians killed during the bloody suppression of the peaceful demonstration on 17 October 1961.”

Members of the right-wing opposition on the Paris City Council – including what was to become President Nicolas Sarkozy’s UMP - boycotted the unveiling ceremony, saying that reviving the issue would whip up tensions between the various communities in France. Police unions tried to stop it.

“It is an act that I wanted to carry out soberly, but clearly and in a spirit of unity and fraternity.”