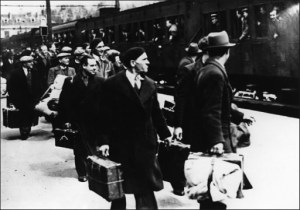 Photo: Jews await deportation at a French railway station in 1941

Schoolteachers have long complained about the difficulties of teaching this chapter in French history. ‘The Holocaust is not the history of the Jewish people; it is history, our history,’ said Hollande.

“The truth is that the crime was committed in France, by France.” One sentence, a few simple, clear words, but how loaded. And how, it turns out, controversial. Still.

President Francois Hollande, under 100 days in the Elysees and has already notched up one of the most historic, powerful, and resonant speeches ever heard in the French Fifth Republic.

That sentence became the focus of the speech he gave last week at a ceremony marking the 70th anniversary of the Vel d’Hiv roundup. It was the largest Aktion carried out on French soil. In July 1942, more than 13,000 Jews from Paris and its environs were arrested. The Jews were concentrated in the Winter Velodrome and from there, most were sent to their annihilation in Auschwitz.

“The crime was committed in France”? Clearly. “By France”? Absolutely not. So it was claimed, once again, following Hollande’s speech. For decades the French looked in the mirror and saw reflected in it a nation of a great revolution, a nation of enlightenment and human rights, a land of refuge and emancipation. When they skipped forward, historically, to World War II, the reflection in the mirror was that of General Charles de Gaulle and Free France, of the Resistance and Righteous Gentiles.

For decades the history of France was blurred, concealed, or even denied, until it was forgotten. But in 1995 President Jacques Chirac decided to shatter the deceitful mirror and put an end to the amnesia. He accepted responsibility for the crimes of the Vichy regime, which collaborated with the Nazis. He did it in France’s name. Chirac sought “to kill” the old myth.

Hollande, 17 years later, came to verify the kill: France is a country of “anonymous heroes,” who are responsible for saving 75 percent of France’s Jews, Hollande noted, justly. But France, he added, also initiated the Vel d’Hiv hunt, organized it, and sent its citizens to their deaths.

One cannot, therefore, accept any longer the claim which holds that the Vichy government was nothing but an executive branch of the Nazis that was imposed on France. The horrific crimes were perpetrated by French individuals, in the name of the French people and France. This collective must take responsibility.

Again and again Hollande repeated in his speech the words that in his view comprise historic justice: “truth” (which there is an obligation to state ), “oblivion” (which he vowed to combat ), and “memory” (which he undertook to nurture ). His words take on special meaning in view of a new poll that has found that 42 percent of the French (and 60 percent of young people ) are unaware of the Vel d’Hiv raid.

Schoolteachers have long complained about the difficulties of teaching this chapter in French history. Hollande addressed them in his speech: “The Holocaust is not the history of the Jewish people; it is history, our history. There must not be a single institution in which it is not learned in full.”

Hollande vowed to fight “with the greatest determination” against anti-Semitism and “all manner of historical distortion, relativization of the Holocaust and attempts to mar its singularity.”

The importance of Hollande’s speech is likewise inherent in its message, namely that morality has no political borders. Hollande created an affinity between himself and the right-wing president Chirac, and dissociated himself from the legacy of his mentor, Francois Mitterrand, who in his youth had joined the Vichy regime.

“The truth never has the power to divide, only to unite,” Hollande said in his speech and thereby revealed his naivete. The far right lashed out at him for “besmirching France’s image” and demanded that he “stop blaming the French.” Similar tunes have also been heard in circles that are considered moderate. Bruno Le Maire, the former agriculture minister under Nicolas Sarkozy, who is running for his party’s leadership, attacked “the grave mistake of the president, who confused the French state (Vichy ) with France.” Henri Guaino, Sarkozy’s senior adviser, announced that he is “shocked” by Hollande’s declaration. “His” France, after all, resided in London during the war, not in Vichy.

Hollande’s speech is an historic milestone. But as it turns out collective French responsibility still has its work cut out for it.

“Matt Gurney: French Holocaust apology too late, too weak and too selfish to work“

Previous Article
How the Washington Post Censors the News
Next Article
Germany: What Have We Learned Since the “Forgotten Holocaust”?

Germany: What Have We Learned Since the “Forgotten Holocaust”?
Nov 30