Pastor Chuck Baldwin says JBS one of his highlights for '08
Written by Lee Gonzales
Tuesday, 06 January 2009 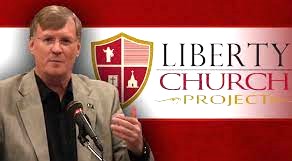 The reverend Chuck Baldwin's weekly blog to his subscribers mentioned some of his personal highs and lows for 2008.

He called his column the "Best and worst List" of 2008. The pastor and Constitution Party nominee recalls people that he met and organizations that he became more familiar with as he trekked the land on the political campaign trail as the nominee for the Constitution Party.

This is an excerpt from that article: "The opportunity I had to speak at the 50th Anniversary of the John Birch Society in Appleton, Wisconsin also makes my "best" list for 2008. John McManus and Art Thompson were gracious hosts and have become good friends.

"The Birch Society is one of the bright spots in America today. No organization has been more unduly criticized as the John Birch Society. And yet, their commitment to liberty and constitutional government has never waned. My hat is off to them.

"The New American magazine is still the finest news publication in America.

Year in and year out, TNA is the best."

We members should be proud that this fine pastor has given us such high praise. I think it speaks well of the character of the mangement and leadership of The John Birch Society and of the patriotic members out in the field, that he felt moved to say these fine and kind words about us.

Thank you pastor Baldwin. We appriciate what you have done for the cause of freedom in America and for giving our organization a boost with your words. It means a great deal to me and my family.

BORN: May 3, 1952, to Mr. & Mrs. Edwin J. Baldwin in La Porte, Indiana. Chuck's father, Ed Baldwin, was a welder by trade and a converted alcoholic. His life story has been played over the international radio program, "Unshackled." He was a lay preacher in the jails and prisons of Northern Indiana for over 35 years.

CALL TO MINISTRY: As a young man, Chuck had decided to pursue a career in law enforcement. His plan was to join the U.S. Marine Corps and afterward begin working as a Deputy Sheriff in La Porte County, Indiana. The Sheriff at that time was Cliff Arnold. (Arnold later became an Indiana State Representative.) Mr. Arnold had told Chuck that following his tour in the Marines, a position at the Sheriff's office was waiting for him. All that changed in the summer of 1970 when Chuck answered the divine call to Gospel minisitry. As a result, instead of joining the Marines, Chuck enrolled in Bible College.

EDUCATION: After graduating from La Porte High School in 1971 Chuck attended Midwestern Baptist College in Pontiac, Michigan, for two years. He then married and moved to Lynchburg, Virginia. He enrolled in the Thomas Road Bible Institute (now known as the Liberty Bible Institute at Liberty University) and graduated with his Bible Diploma. He then earned his Bachelor of Theology and Master of Theology degrees via external degree programs from Christian Bible College in Rocky Mount, North Carolina. Chuck received his first honorary Doctor of Divinity degree from Christian Bible College. He received his second honorary Doctor of Divinity degree from Trinity Baptist College in Jacksonville, Florida. On this occasion Dr. Baldwin brought the Commencement Address to a crowd of over 5,000.

RADIO TALK SHOW HOST: Dr. Baldwin is the host of a lively, hard-hitting radio talk show called, "Chuck Baldwin Live." This is a daily, one hour long call-in show in which Dr. Baldwin addresses current event topics from a conservative Christian point of view. This program, which has been on the air for nearly seven years now, has been highly successful in helping to elect conservatives to local, state and national offices. "Chuck Baldwin Live" is regarded as perhaps the most influential voice in the Florida Panhandle for conservative, Christian principles. Thousands of concerned citizens are being informed and inspired to social and political activism as a direct result of this radio talk show. Chuck's guest list reads like a "Who's Who" from both the local and national scene. The program made its national debut in early May 2001 on the Genesis Communications Network.

MORAL MAJORITY LEADER: From 1980-1984 Dr. Baldwin served as Pensacola Chairman, and then State Chairman of the Florida Moral Majority. Through these efforts many successful rallies and conferences were conducted. (One rally drew nearly 2,000 people during a driving rain storm.) Pro-family legislation was enacted, and Christians were educated as to moral-political information and involvement. Also, thousands of new conservative voters were generated.

Dr. Jerome Corsi is probably the most controversial man in America these days. His blockbuster new book, The Obama Nation, is currently the New York Times Number One Bestseller, and media talking heads are having a hissy fit. They are incensed that there is someone of Corsi's intelligence and credentials who is willing to tell the truth about the presumptive Democratic Presidential nominee, Barack Obama.

You see, the national media have elevated Obama to a position beyond sainthood: they view him as the fourth member of the Godhead. He can do no wrong. He is America's--no, check that, he is the world's--savior. How dare Dr. Corsi spoil the sacrosanct candidacy--and the media's universal anointing--of Obama?

The fact is, however, Jerry Corsi is a rare breed these days: he is an honest and objective journalist whose commitment to truth outweighs his desire for popularity. I will go even further: Jerry Corsi is what the rest of the national media should be, but aren't. ...

Make Yours A Patriotic Christmas
by Chuck Baldwin
November 23, 2004

Even the state Supreme Court in Tennessee ordered several copies. Pastors, teachers, high school and college students, law and history students, and home schoolers have found THE FREEDOM DOCUMENTS immensely valuable to the study of American history and civics.

Included in this remarkable volume are documents such as The Mayflower Compact, The First Thanksgiving Proclamation, the complete text of Patrick Henry's immortal "Give Me Liberty, or Give Me Death" speech, The Declaration of the Causes and Necessity of Taking up Arms, The Northwest Ordinance of 1787, George Washington's Farewell Address, and so on.

We have also included several letters written between John and Abigail Adams as well as letters written from General Robert E. Lee. Do you remember the poem about Paul Revere's ride? Well, it too is included in this compilation. Also included is the letter written from within the Alamo from William Barret Travis to the people of Texas. Of course, the Declaration of Independence, U.S. Constitution and Bill of Rights are also there.

This giant compilation includes more than 50 documents, over 170 full-sized pages complete with a spiral ring binding for easy copying, and a professionally designed color cover. This volume is must reading for every American patriot! Many people are buying them in lots of 10 and more as special patriotic Christmas gifts.

FOR THE PRICE OF A COUPLE OF PIZZAS, YOU CAN HAVE THE GREAT DOCUMENTS OF AMERICAN HISTORY DELIVERED TO YOUR DOOR. ...

Constitution Party presidential candidate Michael Peroutka will officially and publicly invite yours truly to be his Vice Presidential running mate during a special ceremony in Pensacola, Florida, this Sunday, May 2, 2004. The event will take place at the facilities of Crossroad Baptist Church, 6800 Mobile Highway (U.S. Hwy. 90), at 6:00 pm CST. A special celebration banquet will accompany the proceedings.

Regular readers of this column know my feelings regarding the dismal track record of the national Republican Party to faithfully represent Christian, conservative, constitutional principles. I firmly believe that until the American people awaken to the futility of supporting the national Republican Party, conservative principles will never be promoted or defended in Washington, D.C.

Beyond that, the Constitution Party stands solidly and uncompromisingly for the values and principles I believe in. It is the only national party that is unashamed and unafraid to represent conservative, constitutional government. Accordingly, I proudly changed my voter registration from the Republican Party to the Constitution Party.

At the same time, I must candidly admit that never in my wildest imagination did I expect the presumptive Constitution Party presidential nominee, Michael Peroutka, to ask me to join him on his ticket. To be perfectly honest, his invitation caught me totally off guard. It was not something I sought or anticipated. However, after much deliberation, prayer, and counsel, I have decided to accept Michael's invitation.

I will be proud to promote and represent Michael Peroutka and the Constitution Party to the voters of America for this year's presidential election. I have known Michael for several years, and count him a dear friend. I believe him to be a man of great integrity, unflinching courage, and deep humility. He would be a terrific president!
.