'Mr. Big': A Knight of Malta was the Core of Corruption at the Port of NY Depicted in the Film 'On the Waterfront' (Book Review) - The Constantine Report
0 SHARES

Book Reviews » 'Mr. Big': A Knight of Malta was the Core of Corruption at the Port of NY Depicted in the Film 'On the Waterfront' (Book Review)

'Mr. Big': A Knight of Malta was the Core of Corruption at the Port of NY Depicted in the Film 'On the Waterfront' (Book Review)

"... Throughout the struggle, his theme was the presence of 'Christ on the waterfront,' being exploited along with his fellow workingmen. His protector was the New York Jesuit provincial, John McMahon, S.J.; and his nemesis was William J. McCormick, the New York multimillionaire businessman, prominent Catholic, Knight of Malta, and the 'Mr. Big' behind the docks' corruption. ..."

THE PRIEST ON THE WATERFRONT

By Raymond A. Schroth 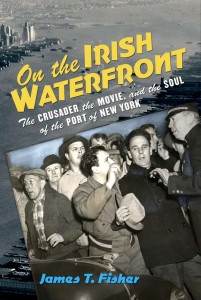 He was tall, tough, balding, with a take-charge presence, someone this idealistic 18-year-old Fordham freshman in 1951 might want to identify with. He was John M. "Pete" Corridan, S.J., standing on the platform in the large philosophy lecture hall in Keating Hall in 1951, spelling out to his rapt audience the depth and breadth of corruption on the New York Waterfront — including the "shapeup" system where the hiring boss glances over over the hundred men desperate for work and plucks his favorites, some of whom have paid bribes and others who have connections, from the line.

Heavy news coverage and muck-raking magazine articles had already made him a name; but none of us guessed that before we graduated this man would inspire the Oscar-sweeping Marlon Brando classic On The Waterfront and that Karl Malden's Fr. Pete Barry stood before us now.

Fordham Professor James T. Fischer's recent On the Irish Waterfront: The Crusader, the Movie, and the Soul of the Port of New New York (Cornell University Press), as the title indicates, is several good books in one. It is a critical, though loving, portrait of the New York-New Jersey docks and the pious, though also corrupt Irish Catholics who made their living there; an in-depth account of the making of the movie, its script development, casting, on-site shooting on the Hoboken side of the Hudson; a case-study of one of the church's and the Jesuits' better attempts to re-connect with the working class; and finally the story of a very dedicated, yet flawed, priest some would say failed in his mission, but triumphed nevertheless.

With roots in the retreat movement, the Jesuit labor schools in Brooklyn, Philadelphia, Brooklyn, New York, and New Jersey, were founded both in response to the papal social encyclicals, Rerum Novarum (1891) and Quadragesimo Anno (1931) — which spell out the church's teachings on the rights of working men and women, — and to offset the influence of the Communist party in the American labor movement. They were, in a sense, the American equivalent of the worker priests movement in France in the 1950s, where priests left their parishes to work in factories in order to best identify with working people.

After earning a M.A. in economics, working in the Brooklyn labor school, and after his ordination, young Jesuit Pete Corridan reported to Chelsea's Xavier Labor School, associated with St. Francis Xavier Parish and High School on 16th Street, to work with Fr. Philip Carey, S.J., who had been there since 1940. But within a few years, Corridan no longer taught but spent all his time on the docks, networking, observing what he saw as the corruption, and, through speaking, writing, and feeding his observations to journalists, fighting to clean up the waterfront. 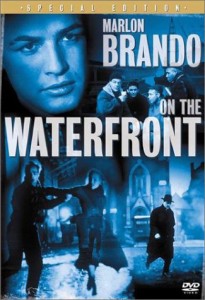 His efforts coincided with investigations and public hearings of the New York State Crime Commission and the United States Senate on waterfront crime; and, while his colleague Phil Carey was determined to stay out of union politics, Corridan's style was to wade in and mix it up. Although he originally declined to testify at public hearings, he did propose a system of reforms, including licensing of the workers, supervision of the docks by the Port Authority, and replacement of the local International Longshoremans' Association union by an AFL chapter. Several of these were later put in place.

Throughout the struggle, his theme was the presence of "Christ on the waterfront," being exploited along with his fellow workingmen. His protector was the New York Jesuit provincial, John McMahon, S.J.; and his nemesis was William J. McCormick, the New York multimillionaire businessman, prominent Catholic, Knight of Malta, and the "Mr. Big" behind the docks' corruption.

But the dock workers for whom Fr. Pete fought did not all appreciate him; they saw him as meddling in their politics and voted to reject the AFL alliance he proposed. Yet his reputation took on mythic proportions when Budd Schulberg's film portrayed him as a hero.

Longshoremen were heavy drinkers, and so was Father Pete. McMahon's successor, Thomas Henneberry,S.J., angry that Pete had cooperated with an author of the new book Waterfront Priest, which includes a private meeting with a supportive Cardinal Spellman, shipped him to LeMoyne College in Syracuse to teach economics. There the alcohol took over and he was sent to rehab. He then taught well at St Peter's College till 1967 and spent his last years as a hospital chaplain. He died in the province infirmary in 1984.

I wish I had known he was there. I would have liked to thank him. In place of that, we can thank Jim Fisher for bringing him back to life.

It needs to be remembered that communists fight without first being given permission by the powers that be. Communists and jews were the first ones to report the 300,000 women sterilized in Peru; now the mainstream media feeding frenzy is on to take that first reporting away, and to fight over whose career is first to advance in that corporate media. Twas ever thus. . . Is it that we value priests because they co-opt workers? Could it be? Yes.

Fox Chairman Roger Ailes' Immigration Policy: "Shoot to Kill" - and His Personal PR Consultant is a Knight of Malta

Scenes from the Post-WW II Reemergence of the Nazi Party