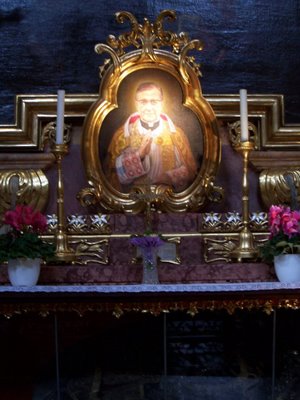 A tug-of-war over the tragic story of a 14-year-old Spanish girl who died of cancer has caused a confrontation between a film-maker and one of Spain’s most controversial and powerful religious groups, Opus Dei.

The battle over Alexia González-Barros, a Catholic whom campaigners want the Vatican to beatify, is the result of the impending release of The Path, in which director Javier Fesser shows the protagonist’s death being applauded by her Opus Dei family.

The film places the dying girl at the centre of a web of interests in which Opus Dei grooms her for a death that will turn her into both a potential saint and a tool for propaganda.

The real-life Alexia died in 1985 after four operations and a 10-month fight against cancer. Nine biographies have been written since her death. The beatification campaign started in 1989 and the petition, containing 4,600 pages in 11 volumes of documents, is now being considered by the Vatican.

Fesser has dedicated the film to Alexia’s memory, but says she served only as an inspiration for the protagonist, whom he calls Camino. ‘It is not, nor does it pretend to be, Alexia,’ he said. ‘It is pure fiction.’ He has angered Alexia’s family, however, by claiming that they really did applaud her death.

Opus Dei, a secular order of priests and laymen aiming to bring religion into the workplace and professions, also criticised the way it has been depicted in a film whose title comes from a book written by its founder, Josemaría Escrivá de Balaguer. ‘It is a false and manipulative picture which offers a highly distorted view of Opus Dei,’ said the group’s Spanish spokesman, Manuel Garrido.

Alexia’s family and her beatification campaigners have led the charge against the film, claiming that she is ‘unequivocally the main protagonist’. Her brother Alfredo said in a letter on the campaign’s website: ‘Your claim that the applause that greeted the protagonist’s death really happened when Alexia died hurts because it is both unjust and terrible. She died as we tried to swallow our tears.’

Critics describe the film as a devastating critique of Opus Dei. ‘A child who is full of life is used, not just by the sect’s leaders, but by her own blinkered mother and a robotic sister, as a sacrificial lamb to glorify both death and the will of God,’ said Carlos Boyero in El País newspaper.

Fesser said: ‘Nothing that is shown in the film should disgust Opus Dei, and if something does it will not be the film’s fault.’

The row comes amid a wider confrontation in Spain between an increasingly politicised Catholic leadership and those who want the church separated completely from the state. Senior bishops have helped lead right-wing opposition to several laws passed by Socialist Prime Minister José Luis Rodríguez Zapatero, including those allowing gay marriage or reducing the importance of religious education in school. Campaigners on the left, meanwhile, are calling for an end to the many state subsidies received by the church. With reform of the abortion law now possible, the confrontation is likely to continue for some time.