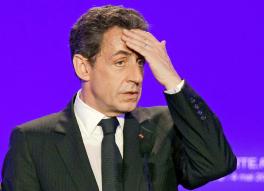 Sarkozy went before a judge on Thursday, Nov.22, 2012 to respond to suspicions he illegally accepted donations from France's richest woman to fund his 2007 election campaign. The judge in Bordeaux could decide whether the 57-year-old conservative, a polarizing figure who often faced criticism for cozy ties to the rich, will be charged with taking advantage of the 90-year-old L'Oreal heiress, Liliane Bettencourt. Sarkozy has consistently denied all allegations.(AP Photo/Michel Euler, File)

PARIS (AP) — He faces the possibility of charges on allegations he took advantage of an aging heiress to get envelopes stuffed with illegal cash for his presidential campaign. His party is mired in an internal feud. And still France's conservatives see Nicolas Sarkozy as their best hope to return to power.

It's a sign of how polarizing the former president is for the French: Many were suspicious of his close ties to the wealthy and threw him out of office; supporters see him as the only person able to save the country's economy and wish he'd return. On Thursday, the former president was named a key — and potentially indictable — witness after 12 hours before a judge to answer questions about whether he accepted illegal campaign donations from the 90-year-old L'Oreal heiress, Liliane Bettencourt.

Bettencourt's former accountant told police she handed over €150,000 ($192,000) in cash she was told would be passed on to Sarkozy's campaign treasurer. In July, a magistrate ordered the seizure of Sarkozy's diaries, including his calendars.

The sum, although it pales in comparison to U.S. campaign funding amounts, shocked many French citizens because spending on political campaigns is tightly limited here. Individual campaign contributions to candidates are limited to €4,600 ($5,930), and no candidate can spend more than €22 million ($28 million) on an entire presidential campaign.

By comparison, an estimated total of $4 billion (€3 billion) was spent on campaigning for this year's U.S. presidential elections, and in the final months of the campaign each candidate was pulling in upward of $100 million (€77 million).

The investigation that has ensnared Sarkozy centers on the finances of Bettencourt, Europe's richest woman and the focus of a long-running family feud over her fortune. Bettencourt, who was reported to suffer from Alzheimer's disease, has since been placed under legal protection.

Sarkozy's election loss in May cost him his immunity from prosecution. By July, his offices had been raided. The Bordeaux prosecutor, Claude Lapland, told the Sipa news agency after Thursday's hearing that Sarkozy was given the status of what in France is known as an "assisting witness," with the possibility of facing charges later on allegations of abusing someone in an impaired state, swindling and abuse of confidence.

"Given the extremely strict rules and controls, illegal financing is completely impossible," said Claude Gueant, who was Sarkozy's campaign director at the time, chief of staff and later his interior minister.

Sarkozy entered the Bordeaux courthouse Thursday without notice after a decoy vehicle lured away the cameras hoping to catch him on the way in, according to the Sipa news agency. He and his lawyer met privately with investigating judges, who handed Sarkozy the special witness status.

They stopped short of filing preliminary charges, as some had expected, and his lawyer Thierry Herzog called the decision a "victory" for the former president. The status is somewhere between a simple witness and a formal suspect.

Herzog tried to tamp down interest in the case, saying on RTL radio Thursday night that the affair "no longer exists."

Sarkozy ally Patrick Balkany, a legislator and mayor, said on BFM television that he spoke to the ex-president after the hearing and "he was content."

Bettencourt's money was contested long before Sarkozy entered the picture. Her daughter accused a celebrity photographer of abusing her mother's alleged mental frailty - and bilking the elder heiress out of €1 billion ($1.3 billion) in cash and artworks. The elder Bettencourt's ex-butler leaked details of household conversations, including one in which the mother seems confused about whether or not she gave an island in the Seychelles to the photographer as a gift.

The island has since been sold off to a wildlife preservation organization. The photographer and an asset manager for Bettencourt face criminal charges of taking advantage of the L'Oreal heiress. And Bettencourt herself has been placed under legal protection of her relatives, including the daughter who first brought the case to light.

As the scandal grew, the French economy stalled, and French voters tossed Sarkozy and his conservative UMP party into the political wilderness. And now the internal vote to replace the ex-president as party leader has descended into bitter allegations of questionable vote counts, leaving the party in chaos.

A poll released Thursday showed that a majority among the conservative UMP party think Sarkozy would be the best presidential candidate for the 2017 elections — nearly double the percentages of those who backed the two men now wrestling for power.

The person mediating the party dispute is Alain Juppe, a former prime minister who was convicted in 2004 in an illegal party financing scheme and has since bounced back as a power broker in the conservative party.

Former President Jacques Chirac, another conservative caught in that same scandal, is the only French leader since World War II-era Nazi collaborator Marshal Philippe Petain to be charged or convicted of a crime.

L’Oreal, the French Minister and the ‘Envelopes of Cash’