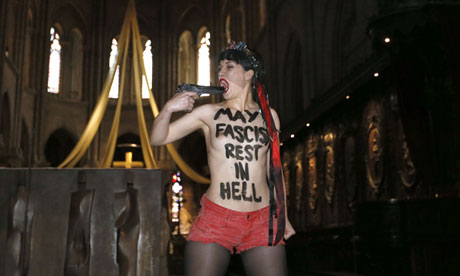 A member of the militant feminist group Femen, known for its provocative topless protests, on Wednesday staged a mock suicide in Notre Dame cathedral in the French capital, less than 24 hours after a far-right historian killed himself there in front of visitors and church-goers.

Posing with a pistol in her mouth the woman, who had “May fascism rest in hell” written in black letters across her naked torso, was detained by security guards. She was then arrested by police outside the cathedral and taken to the nearby police station.

Femen claimed responsibility for the protest on its Facebook page writing: “Femen appealed for the death of facism at the exact same place extreme-right activist Dominique Venner committed suicide yesterday afternoon. Our activist was arrested by the police.”

Inna Schevchenko, leader of the Femen movement, told journalists the protester was a French woman named Marguerite. “It is a message addressed to all those who support facism and those who have expressed sympathy for the extreme-right militant who killed himself in Notre Dame – namely Marine Le Pen.”

Dominique Venner, 78, a far-right essayist and historian took his life in front of the altar at Notre Dame on Tuesday after writing a blog condemning France’s recently passed law allowing same-sex marriage and adoption.

The cathedral was evacuated after Venner walked into the building with tourists at about 4pm, placed a letter on the altar, then shot himself through the mouth. Hundreds of visitors were evacuated. Afterwards, Le Pen, head of the far-right Front National, tweeted her “respect” for Venner and said his death was an “eminently political” gesture.

Before killing himself Venner sent a letter to friends saying he was in good health in body and in mind, was filled with love for his wife and children, and loved life. He had written: “I expect nothing more from life except the continuation of my race and my spirit. However, at this, in the evening of that life and in the face of immense dangers for my French and European heritage, I feel the need to act, while I still have the force. I believe it is necessary to sacrifice myself to break the lethargy that oppresses us. I offer what remains of my life in an act of protest.”

Venner said he chose Notre-Dame as a “symbolic place … which recalls our immortal origins”; the reason for his suicide would be evident from his recent writings. The historian had described France’s same-sex marriage bill, known as the “marriage for all” law, as vile. It passed into the statute books on Saturday after months of furious and often ferocious debate, protest and violence.

Venner was a former member of the Secret Army Organisation, which opposed Algerian independence in the early 1960s and waged a terror campaign against Charles de Gaulle’s government.

Hours before killing himself, Venner wrote on his blog of his anger at the law allowing homosexual couples to marry. Referring to a rally against the law, planned for Sunday, he said the demonstrators were “right to shout their impatience and anger”.

He also wrote of what he described as the risk of France “fallen to the power of Islamists”, saying that for 40 years all governments and parties, except the Front National, businesses and the church, had accelerated north African immigration. He claimed there needed to be “new gestures, spectacular and symbolic” to “reawaken the memory of our origins”. He said: “We’re entering a time where words should be authenticated by actions.” 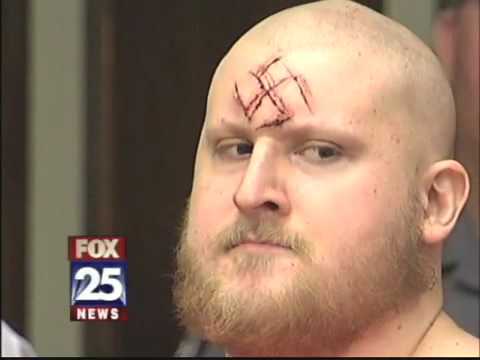 White Supremacist Accused of Brockton, Mass. Double Murder Said He was Determined to Kill Non-Whites
May 23