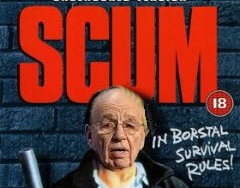 Activists demonstrated in Westminster on Thursday, outside the conference center where the Leveson report into media ethics is to be later released. They’re calling upon parliament to back reform legislation, to stop any one person or organization from having too much ownership of British media.

Wearing a giant papier-mache head of media mogul Rupert Murdoch, one activist burnt the Leveson report on a fire. Other activists held captive another dressed as Prime Minister David Cameron, to illustrate what they call the all-too-powerful grip of Murdoch’s News Corp over the British government.

The activists say giving one entity this much control over the information the public receives is a threat to democracy.

[Meredith Alexander, Campaigns Director, Avaaz]: “David Cameron today has a once in a generation opportunity to end the Murdoch mafia. We’ve seen how Murdoch has used the power of owning a third of our press to corrupt our institutions and undermine democracy. With the Leveson report, he finally has the opportunities to have real reform, and we need to ensure that reform includes limits to ownership to make sure that no one ever owns more than a fifth of our media again.”

The Leveson Inquiry was set up in the wake of the phone hacking scandal, which led to the closure of the Murdoch-owned News of the World newspaper.

Cameron is under pressure from both the newspapers to protect a free press and the phone hacking victims and their supporters to regulate the press by law. He is under no legal obligation to follow whatever Leveson recommends.