Germany: What Have We Learned Since the "Forgotten Holocaust"? - The Constantine Report
0 SHARES

American Terrorism » Germany: What Have We Learned Since the "Forgotten Holocaust"?

What Have We Learned Since the "Forgotten Holocaust"?

... Near Berlin's Brandenburg Gate a memorial was finally unveiled to mark the murder of approximately 500,000 Roma people (often called Gypsies) in Nazi death camps.  The decision to erect it was made in 1992, the year a pogrom in the East German city of Rostock was unleashed when Roma refugees were forced to camp outdoors in public gardens, angering (almost certainly intentionally) the local neighborhood.  It took twenty years to overcome controversies and problems concerning the simple monument, by Israeli architect Dani Karavan, a circular water pool about 12 meters wide (c. 40 feet) with a low triangular stele in the center, to be lowered and raised daily, bearing a single fresh flower.  Nearby are the names of the death camps, a chronicle of events, and a poem, "Auschwitz," by the Italian Roma musician Santino Spinelli.  Chancellor Angela Merkel spoke movingly, followed by a survivor of the annihilation of so many of the Roma population who spoke of the "forgotten holocaust" and of his regret that society had learned "almost nothing" since then, in view of continuing discrimination from France to the Balkans.

That was on October 24th.  On October 25th Merkel's Interior Minister, Hans-Peter Friedrich, demanded that entrance visa and asylum rules for people from Serbia and Macedonia be sharply tightened, that decisions on approving or rejecting applications be speeded up, and that skimpy cost-of-living allowances for those waiting should be reduced.  He avoided the word -- but it is common knowledge that 90 percent of these would-be immigrants are Roma people, whose living conditions in much of southeastern Europe have become intolerable.

... Aside from big and little breakdowns in the elevated train system, by now almost normal, the giant new headquarters for the Federal Intelligence Bureau (BND), at the site of a main stadium in former GDR times, was also hit by delays caused by mismanagement; the price tag, originally set at 720 million euros, has already reached 912 million.  This bad-luck espionage center, less a sister of the CIA than its daughter, was set up in 1956 by a top Nazi espionage general, Reinhard Gehlen, after absolving his service with the American cloak-and-dagger chiefs.  He immediately staffed his organization near Munich (where it remains until the Berlin building problems are overcome) with all his old SS, Gestapo, and other war criminal buddies.  The more anti-Communist they were the better their chances of a good job -- until a scandal in the 1960s forced him to fire 71 of the very bloodiest.  By now those men have died off, a small consolation to judge from the present lot.  And no one here seems overly worried about delays in this particular moving day. 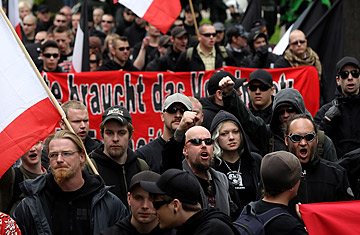 This BND agency also has a German sister, the Constitutional Protection Bureau -- rather like the CIA and FBI siblings in the USA.  But the sister also directed its main attention to obstreperous leftists or, more recently, other sinister elements who don't even speak German properly.  Thus it somehow overlooked a widespread neo-Nazi underground network which killed people (mostly immigrants) and set off bombs for over ten years without being detected, even though rightwing groups and the neo-Nazi "National Democratic Party" are filled, even staffed, with highly-paid secret government agents.  Lengthy investigations of what has obviously been collusion were rendered more difficult because this government agency shredded thousands of relevant documents when the facts first started to bubble up out of the morass.  The investigations are still in progress. ...

Victor Grossman, American journalist and author, is a resident of East Berlin for many years. He is the author of Crossing the River: A Memoir of the American Left, the Cold War, and Life in East Germany (University of Massachusetts Press, 2003).