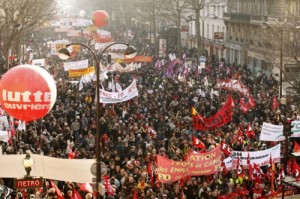 (AFP) PARIS — Roma migrants whose camp was bulldozed led a protest in Paris Saturday against the French government's security crackdown, with similar demonstrations taking place across the country and abroad.

Marches organised by human rights groups, unions and left-wing political opposition took place in a number of French towns and cities, while protesters gathered outside French embassies in Europe.

The government of President Nicolas Sarkozy embarked on a major security clampdown in July, which included the widely criticised expulsion of nearly 1,000 Roma to Romania and Bulgaria.

In Paris, a group of 40 Roma whose illegal camp was destroyed led a major procession into the centre of the capital, with banners reading: "No to the inhumane politics of Sarkozy".

According to police estimates, 12,000 people took part in the demonstration, while organisers put the figure at 50,000.

Earlier a group of celebrities from the world of culture, including actress-singer Jane Birkin, had staged a protest in support of undocumented migrants outside the ministry of immigration.

In the southwestern city of Bordeaux, more than 1,000 people took part in a two hour march calling for an end to "xenophobic" policies.

"It is a right and a duty for us to take part in this demonstration, because if we let them crush us, one wonders where this will go," Antoinou Jimenez, a representative of a group of travellers in the area, told AFP.

A similar number of people gathered in Toulouse for a demonstration against "state racism".

One of the demonstrators, who only gave his name as Vincent, said he had attended the rally to show "that there are not only racists in France".

Around 20 people gathered outside the French embassy in London. Some held placards with a picture of Sarkozy which said: "Behind the smile, the guilt".

In Brussels, around 100 people including Roma protested outside the French embassy with signs mocking the compensation of 300 euros (385 dollars) awarded to Roma who volunteer to be sent back home.

In Spain, protesters in Madrid and Barcelona read out a letter that would be delivered to the French ambassador calling for France to respect human rights.

The demonstrations came as the French senate prepares to debate on Tuesday a tough new security law.

The law, which has already been adopted by the lower house, will punish the killers of police more severely, increase minimum sentences for violent re-offenders and bring in electronic tagging for foreign criminals before their expulsion.

More than 8,000 Roma have been deported from France since the beginning of the year, with 9,875 expelled throughout last year.

There are an estimated 15,000 Roma living in the country. Under EU freedom of movement laws, they are entitled to stay for three months without a permanent residence or job, before facing expulsion.

The French government maintains its policies are strictly within the law, despite widespread criticism, and questions from Brussels.