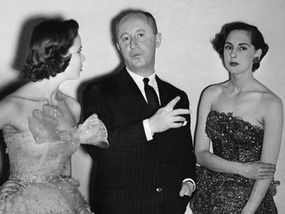 JOHN Galliano’s anti-Semitic outburst that led to him being sacked from Dior this week brought back memories of how his company’s founder and other Paris designers worked for the Germans.

Rows of exquisitely dressed women – many of them the wives and mistresses of high ranking Nazi offiers – sat with elegant poise on the small gilt chairs that had been arranged in rows on either side of the catwalk.

These were the dark days after the Germans had marched into Paris on July 14, 1940, and the bejewelled women had gathered for a fashion show that would contain work by a young designer called Christian Dior.

Even Susanne, the wife of Otto Abetz, the German ambassador to occupied France, was invariably present at these glittering shows.

This is particularly ironic considering that this week the fashion house bearing Dior’s name – he became internationally known after the war – has sacked its chief designer, the volatile John Galliano, after his anti-Semitic rant in a Paris café. He is also alleged to have said in a video that made the rounds: “I love Hitler.”

In a statement Dior’s president and chief executive Sidney Toledano said: “I unequivocally condemn the statements made by John Galliano which are in total contradiction to the long- standing core values of Christian Dior.”

The fact that the fashion house’s founder was content to design for Nazi and collaborationist wives during the occupation remains a sore point for the house of Dior even more than 60-odd years later.

For Paris designers – in 1940 as now – the world of fashion reigned supreme, irrespective of politics and war. To Dior it was his very reason for living.

But after the outbreak of war and his demobilisation from the army in 1942 Dior worked on a tiny farm in Callian, a village clinging to a hillside in the hinterland of the French Riviera. The work was backbreaking but he continued to dream of a return to designing which he did after being hired to make fashion sketches for the newspaper Le Figaro. It was a return to the world he loved.

Eventually a friend heard that leading designer Lucien Lelong was looking for staff and Dior was hired. But the dark clouds of Nazi occupation were spreading and some of the biggest names in fashion were fleeing the country. Saving the French fashion industry – at whatever cost – soon become a major priority. If it meant working for the occupying Germans – then so be it.

For designers such as Dior and Lelong, it was a matter of cultural heritage, even life itself. The livelihood of 12,000 workers was now at stake and an industry that brought in huge profi ts while using relatively few raw materials.

Dior and Lelong knew the Germans had long been envious of the influence and image of French fashion the world over – and were equally irritated by its “free-thinking” ways.

One can imagine the designers’ horror when German offi cers suddenly ransacked the offices of the Chambre Syndicale de la Haute Couture, the trade union of dress designers founded in 1800 to protect the industry from piracy and plagiarism.

The Germans had intended to move the centre of European fashion from Paris and move it to both Berlin and Vienna. Lelong, with the backing of Dior and other designers, travelled to Berlin to argue the case for keeping the heart of fashion ticking in Paris. Surprisingly, the Germans were persuaded to leave French fashion alone, despite the fact that they were developing their own highly subsidised fashion industry.

But Lelong and Dior’s victory came at a price. French fashion could no longer be exported or even photographed. That left the industry with a home market and, inevitably, the sale of fashion to rich Germans and wealthy collaborationists. Other parts of the fashion world also suffered. Paper shortages meant the magazines were hit and the refusal of the chief editor of Vogue, Michel de Brunhoff, to compromise with the Germans meant the fashion bible was closed down.

Some fashion houses defied the Germans and were also instantly closed. The House of Grès, run by the formidable Madame Grès had been allowed to stay open in the hope that she would willingly dress the wives of German officers. But unlike many of the others she refused and was immediately shut down. Madame Grès, who was Jewish, was also lucky not to have been sent to a concentration camp.

There was much anger, particularly among the Resistance, that some fashion designers had decided to co-operate with the Germans.

Coco Chanel closed her business down and to the horror of friends and employees became involved with senior Nazi officer Hans Gunther Von Dincklage, who was 13 years her junior. She lived with him in some splendour in her beloved Ritz hotel. She was arrested after the war for co-operating with the Germans but was freed after members of the British Royal Family intervened on her behalf. There was no evidence that she had committed any war crimes but her reputation in France suffered greatly.

Meanwhile Dior remained adamant that haute couture always maintain its standards and insisted nothing would impair such standards more than stooping to an inferior class of client. He was always delighted when upper-class women, always bent on staying elegant, continued to turn up at the collections, even if in the company of German military wives.

Some couturiers who remained in business, always courtesy of the Nazis, designed more practical outfits rather than glamorous gowns. The Vichy government also requested that they produce an “outdoor look” and women were exhorted to dress like mothers, virtuously and sensibly.

Life in Paris for the likes of Dior and many others (including the notorious black marketeers) was not particularly hard during the occupation. It has been rightly said that the heart of Paris “hardly skipped a beat during the Nazi occupation”. There remained a flourishing arts scene . Many of the wealthy gathered to discuss the arts at the weekly salon run by wealthy American Florence Gould.

At a less intellectual level, movie magazines (albeit with rationed pages) satisfi ed the mass yearning for light reading with detailed accounts of, for instance, the steamy affair between film star Danielle Darrieux and Dominican playboy diplomat Porfi rio Rubirosa.

And Jean-Paul Sartre, Albert Camus and Picasso were among those who lived and worked very productively during the German occupation. Some writers with fascist leanings welcomed the Nazis and openly collaborated with them.

After the liberation there was an outburst of vengeance and some were even executed. This outburst of punishment was also directed at hundreds of women who had slept with Germans during the occupation. These included prostitutes and even housewives whose husbands were prisoners of war in Germany. The punishment meted out for this was mostly head shaving and being paraded around the streets.

Most Parisians were content to make the best of the conditions imposed on them. But the pavement cafes remained open and, despite food shortages, people were optimistic, knowing that the war would eventually end.

One notorious aspect of Parisian life flourished as never before under Nazi rule – the city’s world-famous brothels. With thousands of fit young German soldiers looking for diversion and thrills, the brothels did a roaring trade in sex – of every kind. Social commentator Patrick Buisson described such establishments’ ascendancy as the most blatant examples of the widespread “horizontal collaboration” which shamed France during the war. Many of the same German officers who were attending fashion shows with their wives would later frequent the brothels.

Meanwhile Christian Dior worked steadily on with his German clients, dreaming of the fast-approaching day he would open up his own fashion house – and startle the fashion world in 1947 with his famous New Look designs.

Dior’s collaboration with the Germans – and those of other fashion houses – would eventually be forgotten. Then his successor John Galliano ranted in a Paris café more than 60 years later and Dior has been tarnished again.