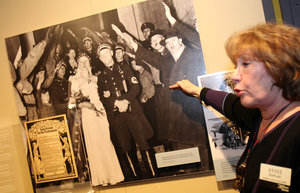 An exhibition on the eugenics movement of the early 20th century opens Tuesday at the National Archives Kansas City. Renee Kaplan, who works with the U.S. Holocaust Memorial Museum, led a training session last week to teach guides how to deal with the topic.

Teenagers will be descending upon a new exhibition that opens Tuesday in Kansas City. But viewer discretion is advised. The sensitive material in “Deadly Medicine: Creating the Master Race” at the National Archives in Kansas City has prompted presenters to recommend that only those who are high school age or older visit the exhibit.

“This is very complex history, and much of the material is upsetting for adults,” said Jean Zeldin, executive director of the Midwest Center for Holocaust Education in Overland Park. The center is sponsoring the traveling exhibition, organized by the U.S. Holocaust Memorial Museum in Washington.

The display details how elite members of German society, among them physicians and scientists, helped legitimize an emerging Nazi racial ideology in the 1930s and 1940s. That included public health policies that authorized the forced sterilization of those deemed unfit, as well as the “euthanasia,” or murder, of those considered unproductive or a drain on national resources.

Such policies represented initial steps in what became the subsequent genocide of European Jews.

Renee Kaplan, a member of the Holocaust museum’s regional education corps, led training sessions for volunteer guides last week. Among her suggestions: Be alert to terminology. Words that some considered appropriate at the time — “imbecile” or “feeble-minded” — can represent charged language today.

“You should be sensitive to terms of labeling and name-calling,” Kaplan said. ...

Kaplan instructed volunteers in how some aspects of the eugenics movement — which championed the selection of desirable human characteristics in an effort to improve future generations — enjoyed international support in the early 20th century.

One photograph, placed near the exhibit’s entrance, depicts a eugenics display at a Topeka fairground in the 1920s. But as Kaplan led volunteers through the rest of the exhibit, she pointed out photographs, propaganda posters and artifacts that illustrated how the Nazis took that concept and redirected it to serve their own anti-Semitic ends. Some photos or film clips depict children, as well as mentally or emotionally impaired adults, upon whom the attention of the Nazi regime once was focused.

Although parents are free to bring their children to the exhibition, organizers are asking that they exercise discretion. Kaplan believes the recommendation that those younger than high school age not visit is wise.

“This is a very challenging concept to understand,” said Kaplan, who teaches eighth-grade students in Marietta, Ga.

High school students, she said, can be baffled about how such practices could have been kept from or tolerated by the German public. But visitors should be reminded, Kaplan added, that members of pre-World War II German society had no access to the vast digital grid of information that contemporary teenagers take for granted.

“Seventy years ago was a long time ago for a 14-year-old,” she said.

One volunteer agreed that his task will be challenging.

“A lot of this will involve encouraging people to think about what is in front of them,” said Tom Larson, deputy U.S. attorney with the Kansas City U.S. attorney’s office, who will serve as an occasional volunteer.

“How do human beings get to this point? But that is why we study history.”

“Deadly Medicine: Creating the Master Race” opens Tuesday at the National Archives in Kansas City, 400 W. Pershing Road. A ribbon-cutting is scheduled for 10 a.m. Admission to the exhibit, which runs through June 10, is free.