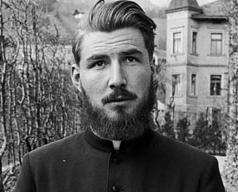 Martin Bormann Jr. is shown at a seminary in Austria in 1958. The son of Hitler’s deputy, he has been accused of violently and sexually assaulting young pupils while teaching at an Austrian boarding school in the 1960s.

Martin Bormann Jr., the eldest son of Adolf Hitler’s deputy Martin Bormann, has spent decades attempting to atone for his father’s sins. He has served as a priest and a Catholic missionary and has lectured in Germany, Austria and Israel on the horrors of the Holocaust.

But Bormann Jr.’s almost saintly reputation is now threatened after he was accused of violently and sexually assaulting young pupils while serving as a teacher at an elite Austrian boarding school in the 1960s. Bormann Jr. has denied any knowledge of the events.

The allegations — the latest in a flurry of sex abuse charges leveled at members of the Catholic Church in Germany and Austria over the past year — were made by a 63-year-old former pupil at Salzburg’s Heart of Jesus Monastery. The man, named only as Victor M., told Austria’s Profil magazine that when he was just 12 years old he was repeatedly raped by Bormann Jr., then a 30-year-old priest.

The top Nazi’s son allegedly warned Victor M. that it was pointless to tell his family about the abuse because “nobody will believe you.” Bormann Jr. was right. When Victor M. — the son of a French nobleman and a former Nazi forced laborer — told his mother, she casually dismissed his claims.

Victor M., who turned to alcohol to try to erase his memories of those days, isn’t alone in accusing Bormann Jr. of brutal abuse. One former pupil interviewed by Profil recalled seeing the schoolmaster hurl a boy against a wall so hard that the child’s face was covered in blood. Another claimed Bormann Jr. once knocked a boy unconscious by punching him in the back of the head. He allegedly had the boy doused in cold water and declared, “We will bring the weakling back to life.”

But Bormann Jr. wasn’t the only alleged abuser at the Heart of Jesus Monastery. One teacher — dubbed “Joe Bat” for his preferred method of punishment — reportedly enjoyed pushing his fingers so far up pupils’ nostrils that their noses began to bleed. “It still hurts a lot,” a 62-year-old former pupil told the magazine, as he recalled his years at the school. “You can see that I cry when I talk about it, even though I’ve been through psychotherapy.”

The Rev. Walter Licklederer, who now serves as head of the Salzburg order, said he was “shaken” by the allegations.

As the son of a high-ranking Nazi, and Hitler’s first godson, Bormann Jr. was educated at a similarly brutal institution. He was shipped off to the Nazi Party Academy in Bavaria when he was 10 and stayed there until the collapse of the Third Reich five years later. Speaking to the British magazine The Spectator in 2000, Bormann Jr. described how he first became aware of the horrors of the Nazi regime in the summer of 1944, when he visited the home of Heinrich Himmler’s mistress with his mother and sister. She ushered them up to the attic, where they were shown Himmler’s “special collection.”

“There were special editions of Hitler’s ‘Mein Kampf’ printed on parchment made with skin from the backs of human beings,” he told The Spectator. “Then there was a little table and a stool which were partly made from human bones.”

At the end of the war, Bormann Jr. — then a refugee hiding out at an Austrian farm — saw the first photographs from the concentration camps. Many Germans insisted they were fakes. “But I knew they were real,” he said. “I had seen Himmler’s furniture.”

It was only during the Nuremberg Trials of 1945-46 that Bormann realized the crucial role his father had played in the Holocaust. Witnesses testified that he had ordered the deportation of Dutch Jews to Auschwitz and dismissed Slavs as subhumans. “The Slavs are to work for us,” Bormann wrote in a 1942 memo. “In so far as we do not need them, they may die. Slav fertility is not desirable.”

Bormann was not present at Nuremberg. It was thought he had fled to South America, and he was sentenced to death in absentia. In fact, Hitler’s successor was already dead. He had died attempting to flee Hitler’s Berlin bunker in 1945, and his remains were discovered in 1972.

Shocked by these revelations, Bormann Jr. abandoned his family’s Lutheranism and trained as a Catholic priest. He spent six years as a missionary in the Belgian Congo — where he was captured by rebels three times — and was released from the priesthood in 1969 after he was almost killed in a car crash in Germany. Three years later he married a Dominican nun who nursed him following that accident.

When Profil magazine visited Bormann Jr. at an undisclosed location in Germany, he said he could not remember the alleged incidents of abuse. And when shown a photograph of his alleged victim, the 12-year-old Victor M., he responded, “That’s a girl.”