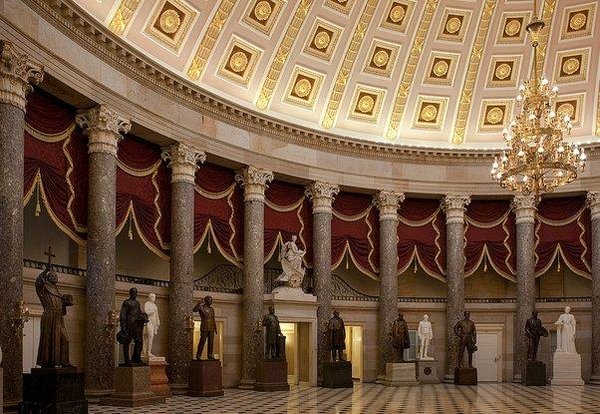 And yet, as my friend Rob Boston reported, that’s one of the things making a prayer rally on Capitol Hill today interesting.

On May 8, a group called Come Pray With Me plans to hold a prayer service in Statuary Hall at the U.S. Capitol.

This is kind of a big deal. Statuary Hall isn’t some sort of public facility that anyone can use. Groups have to get permission from the congressional leadership to hold events there, and it’s not often granted.

So what is Come Pray With Me, and why does it merit this honor?

As it turns out, the prayer rally is a project of Dan Cummins, who leads Bridlewood Church in Bullard, Texas. Its official congressional sponsor is Rep. Louie Gohmert (R-Texas), and given the limited access generally made to Statuary Hall, the event has effectively been endorsed by House Speaker John Boehner (R-Ohio), whose office had to give its permission.

Cummins is an odd character in his own right — he’s a birther who believes this is a “Christian nation” and that church-state separation is a communist idea — but the guest list for today’s Come Pray With Me is equally disconcerting. Rob’s report added, “They include Jim Garlow, a California pastor active in Republican politics who has openly endorsed candidates from the pulpit; Bishop Harry Jackson, a Maryland preacher known for anti-gay activism; Alveda King of the extreme anti-abortion outfit Priests for Life and David Barton, the Religious Right’s favorite pseudo-historian.”

I’m curious about why, exactly, the House Republican leadership is willing to lend these folks Statuary Hall, which is rarely lent to anyone. Would the Speaker’s office be equally gracious towards other faith groups or for an atheists’ event?

Just to be clear, the point isn’t that these religious right figures shouldn’t be allowed to host prayer rallies; they obviously should. What’s more, whether I find their agenda and/or message offensive is irrelevant. Rather, I’m interested in knowing why this exclusive area of the U.S. Capitol is being made available to fringe, far-right activists, when Statutory Hall usually isn’t available to much of anyone for special events.