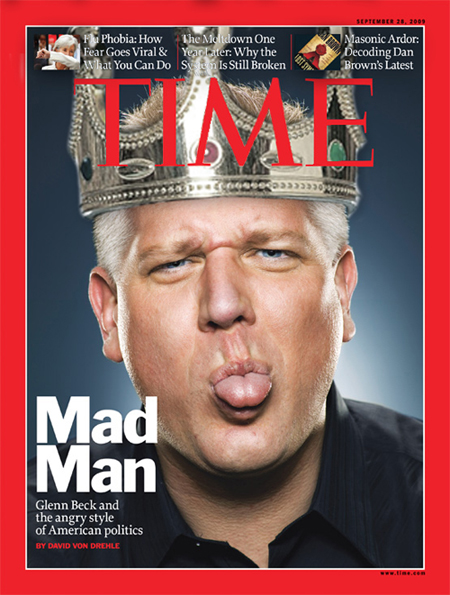 Responding to Rev. Jim Wallis' statements about him in the Washington Post, Glenn Beck stated, "Thou shalt not lie." However, contrary to Beck's denials, Wallis' Post op-ed accurately described Beck's repeated statements that social justice is code for communism and Nazism and his advice to his listeners to "run as fast as you can" from churches espousing social justice.

Beck to Wallis: "Thou shalt not lie." On the April 7 broadcast of his radio show, Beck stated:

BECK: There's trouble today. Christians are standing up to Glenn Beck by Jim Wallis in the Washington Post. "Glenn Beck has picked a fight with me, but he recently started a more troubling battle with the nation's churches with his criticism that 'social justice' is 'code' for 'communism' and 'Nazism' " -- no, no. He said, quote, "Christians should leave their churches if they preach, practice or even have the phrase on their Web site." No, Jim, that's - Jim, let me just, because I know you're a minister, and may I? Thou shalt not bear false witness against thy brother. Now I know we're not technically brothers, but in the Lord's eyes, we are. Thou shalt not lie. Social justice is also about stealing. Thou shalt not steal. Look in second Kings. I found something this weekend that I just loved, something about giving from your heart, the Lord rejects it if it's not coming from your heart - yeah look that one up, Jim.

Glenn Beck has picked a fight with me, but he recently started a more troubling battle with the nation's churches with his criticism that "social justice" is "code" for "communism" and "Nazism," and that Christians should leave their churches if they preach, practice or even have the phrase on their Web site.

Beck: "On each banner" of Nazism and communism "read the words, here in America, of this - social justice." On his television show, Beck stated:

Both the communists, who are on the left -- they say -- you know, these are communists. And the Nazis are on the right. That's what people say. But they both subscribed to one philosophy, and they flew one banner. One had the hammer and sickle; the other was a swastika. But on each banner read the words, here in America, of this -- "social justice." They talked about economic justice, rights of the workers, redistribution of wealth, and surprisingly -- I love this -- democracy. [Glenn Beck, 3/2/10]

Beck: Social justice "is a perversion of the Gospel," "not what Jesus was saying." On his radio show, Beck addressed a caller who said his daughter was taking classes for confirmation in the Catholic Church that were "becoming more and more about social justice." Beck stated: "I want you to know that even some members in my faith, where I go to church -- there are members that preach social justice as members. My faith doesn't, but the church -- the members preach social justice all the time. It is a perversion of the Gospel. Nowhere does Jesus say, 'Hey, if somebody asks for your shirt, give your coat to the government and have the government give them a pair of slacks.' That's not what -- that's not what Jesus was saying." [The Glenn Beck Program, 3/11/10]

Beck's advice for when you see the words "social justice": "Run, and don't listen to anyone who is telling you differently." On his radio show, Beck stated:

BECK: [T]here are big forces within the faith of different churches that have joined hands with truly Marxist groups, and it's all under social justice. And this is why social justice started. It started in groups in Latin America that they knew they couldn't get into the government because the government -- what was really regulating people there was the church. And so the churches were so powerful, they knew they had to weasel their way in there and tie it to God.

It's the same thing that progressives did in the early 20th century. They used God and the churches, and then they broke it apart. That's what's happening. And I'm going to share some evidence next week on different faiths that, known or unknown to many people in the faith, they are part of the social justice movement. And it is Marxist, and it is extraordinarily dangerous. These people have been laying eggs, and they have hatched a long time ago. They are in many, many organizations. You are doing exactly the right thing. You cannot take anything on its face value anymore. You've got to look at the layers and know what you're looking for.

BECK: When you say, you know, I see "social justice" -- when you see those words, run. Because social justice is what Jeremiah Wright preaches. Run, and don't listen to anyone who is telling you differently. Look at the roots of social justice. See what radicals put it together. [The Glenn Beck Program, 10/8/09]

Beck warns of "Marxist code words" like "social justice" in "infiltrated" churches. On his radio show, Beck warned his listeners to "watch the messages in your own church. Because if you see the words 'social justice,' you're in trouble." He continued:

BECK: If you see the words -- what is -- social justice, and what was the other one? Economic justice. You see these -- these are code words. These are the Marxist code words for the new global order. You see those words, if you see things that are now being preached about from the pulpit in many churches, about health care. Warning. Warning. Many churches have been infiltrated with this line of thinking that is absolutely against the freedoms that our Founding Fathers designed. And you can find them, you can find them. And they're not hard to find. Look for them and wake your fellow parishioners and your fellow congregants up to what is going on, because there are hidden messages that are there. And they're not hidden. I mean, it's not a conspiracy. It's all out in the open. [The Glenn Beck Program, 12/15/09]