Caveat: Most of the biographical details of this story are correct, but the author attempts to use them to cast Nazi aspersions on Muslims in general, especially revolutionary movements opposed to American and Israeli intervention in the Middle East. I've redacted the skewed conservative commentary and kept a few historical facts here to salvage them from the author's obvious attempt to program his readers with American Spectator-style prejudicial overstatement and flat-out misinformation. Fact-checking the story also led me to delete some details. And "a secret U.S. intelligence document " is cited as a source for some of the information provided -- I have been unable to confirm this, and can only wonder how Mr. Rubin gained access to a classified intelligence file. He needs to identify it with specific reference to title, file number and such so the "war criminal" allegations can be verified independently, if possible ... or better yet, post the "secret" file verbatim and take the spare bunk in Bradley Manning's prison cell  ... - AC

Exclusive: An Islamist Nazi Collaborator is Transformed into a Moderate 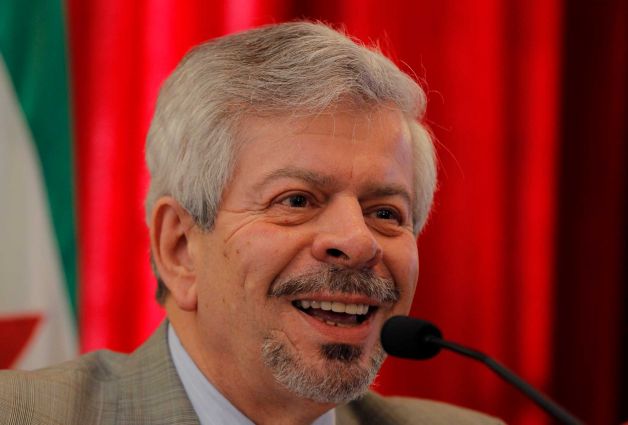 Suppose you read in the Washington Post about a democratic politician who was a refugee from persecution by a dictatorship. Would you be surprised to learn that he was in fact a vicious antisemite, a radical Islamist, and—by the way—a wanted war criminal for his collaboration with the Nazis?

In fact, all of the facts about this politician are easily available in the public record. The man in question is Maarouf al-Dawalibi, whose son, Nofal, has now declared himself leader of a Syrian “government in exile.” I don’t want to be unfair to the Washington Post, which in this case merely reports what someone told it and had no reason to research this specific point. ...

“[Nofal] al-Dawalibi said his father, Maarouf, was the `last freely elected prime minister’ in Syria, in 1961, but was later jailed and fled to Saudi Arabia two years later, where he became an adviser to the royal family.”

So who was Maarouf? According to official German  documents and U.S. Army war crimes’ investigators, he was a Nazi agent stationed in Paris, working for the grand mufti, Amin al-Husaini, and on Berlin’s payroll during World War Two. A secret U.S. intelligence document of June 17, 1945 puts Maarouf al-Dawalibi on the wanted list of war criminals. Somehow he eluded capture.

When the radical nationalist Ba’th Party ... came to power in 1963, al-Dawalibi did indeed go into exile. But far from being an advocate for moderation or democracy, he again went to work for his wartime boss, Amin al-Husaini ...

The World Muslim Congress, the movement’s main international group at the time, had been founded and led by al-Husaini since 1931. During the war, al-Husaini had used it as one of his main assets as a Nazi collaborator, explicitly offering the group’s services to Hitler. Al-Dawalibi became al-Husaini’s successor as its leader.

Al-Dawalibi also worked for the Saudis. In 1984, as Saudi Arabia’s delegate at a UN seminar on religious tolerance and freedom in Geneva, al-Dawalibi explained: “If a Jew does not drink every year blood of a non-Jew, then he will be damned for eternity.” He also claimed that “Hitler’s extermination” of the Jews was understandable because, “They call themselves the chosen people and allege they were chosen by God from among all the peoples….”