“… Bruce Schneier, author of Secrets and Lies and other books on security technology, criticized the DARPA idea as ‘un-American’ and a police state ploy. ‘This is what a police state does — everyone watching what everyone does and the police watching your every move,’ Schneier told CNN in a telephone interview.’ …”

Washington (CNN) — The Pentagon wants computers to see into the future — and stop crimes before they happen.

As the U.S Army considers whether Maj. Nidal Hasan, the suspect in last year’s Fort Hood massacre, should face a court-martial, it also is looking at whether the military missed signals that might have indicated what was about to happen.

Now a Pentagon research arm is asking scientists to create a way to scan billions of e-mails to identify suspects in advance so that crimes can be stopped before they are committed.

That’s the goal of the latest $35 million project announced by DARPA, the Defense Advanced Research Projects Agency, which is credited with breakthroughs like the internet, GPS and stealth technology.

But this latest idea is already is drawing fire from privacy and security experts.

In a request for proposals, the think tank highlights the Fort Hood shootings.

“Each time we see an incident like a soldier in good mental health becoming homicidal or suicidal or an innocent insider becoming malicious, we wonder why we didn’t see it coming,” DARPA says. “When we look through the evidence after the fact, we often find a trail — sometimes even an “obvious” one. The question is: Can we pick up the trail before the fact, giving us time to intervene and prevent an incident.” 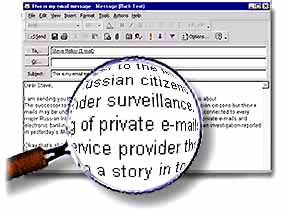 The agency calls the project ADAMS, for “Anomaly Detection at Multiple Scales.”

Simply tracking messages to and from people around a single location like Fort Hood would be a vast task. There are 65,000 people at Fort Hood and in a single year they may create 4.68 billion electronic messages between almost 15 million people.

The challenge is to cope with and get accurate results from all this data.

The agency said it would primarily use ADAMS to look at “trusted person(s) in a secure environment with access to sensitive information and information systems and sources.”

“There are currently no established techniques for detecting anomalies in data sets of this size at acceptable false positive rates,” the agency notes in the request for proposals.

“The focus is on malevolent insiders that started out as ‘good guys.’ The specific goal of ADAMS is to detect anomalous behaviors before or shortly after they turn,” the agency says. “Operators in the counterintelligence community are the target end-users for ADAMS insider threat detection technology.”

Even more than the technological challenges, the project raises both policy and legal implications, according to James Lewis of the Center for Strategic and International Studies. He says DARPA and the U.S. government have been struggling for a while with how to use computer software to screen millions of transactions, something credit card companies already do.

“But credit card companies can screen your transactions because you’ve entered into a contract with them and because it is in your interest to keep your account safe. The same isn’t necessarily true for e-mail,” Lewis said in an e-mail.

“If you are sending e-mail from your work account, your company has the right to screen it. But if you are sending it from your personal account, no one has the right to screen it unless they get a court order, and getting the court order requires some sort of advance knowledge of malicious intent, which defeats the purpose of screening, Lewis said.

Bruce Schneier, author of Secrets and Lies and other books on security technology, criticized the DARPA idea as “un-American” and a police state ploy.

“This is what a police state does — everyone watching what everyone does and the police watching your every move,” Schneier told CNN in a telephone interview. “And what we learn from history is that police states never work. It never is safer.”

He added, “We are American. We don’t spy on everybody else. And as a security guy, it works great in the movies but in real life you aren’t going to be any safer. … The false claims are going to kill you.”

DARPA doesn’t like to talk about this or other pending projects. One person affiliated with the agency who insisted on anonymity because this person lacked authorization to speak to journalists, said the agency admits there are unresolved questions, including “How do you do this without invading privacy.”

“It’s too early to comment,” the person said. “… We rarely talk about a DARPA program as an idea until it’s become a full-fledged program of record.”

Government Security News, which first reported on the project, compares it to the Tom Cruise movie “Minority Report.” That science fiction film from Steven Spielberg was based on the premise that computers had kept the city of Washington murder-free for six years by using “astounding technology” to predict crimes and discover about-to-be criminals.

An earlier DARPA plan, called Total Information Awareness, run by a former national security adviser, Adm. John Poindexter, was developed months after the 9/11 attacks to identify terrorists by combing through huge amounts of credit card, financial, travel and other electronic information. After a uproar over privacy and before it was implemented, the project was scrapped by Congress in 2003.

Why Kill the Mob Watchdog at the NJ Port?
Oct 31