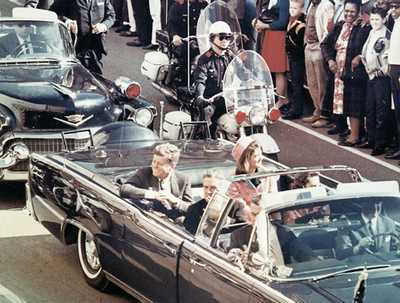 GIJON, Spain (Reuters) - Like many, Fabian Escalante remembers what he was doing when he heard U.S. President John F. Kennedy had been shot: he was trying to stop the Central Intelligence Agency from toppling the Cuban government with the help of anti-Castro exiles.

Years later, when he had risen to head Cuba's Department of State Security, he was well placed to consider whether those same exiles may have had a hand in the November 22, 1963 slaying of the dashing young president in Dallas.

Escalante does not claim to know who killed JFK, but says that Cuban exiles recruited by the CIA had planned to kill Kennedy twice in November 1963, because they felt the U.S. president had done too little to topple the government on the Caribbean island.

"They had the capability, the means and the intent," he said in an interview on the sidelines of the Semana Negra crime writing festival in Gijon, northern Spain.

"How was this meant to turn out? To assassinate Kennedy, launch a furious campaign against Cuba, blaming it for the assassination, which they did, then kill Fidel Castro a few days later, on December 12, and invade

Escalante worked with members of the U.S. House Select Committee on Assassinations investigating the JFK killing when they travelled to Cuba in 1978 to collect data on the activities of Cuban exiles.

In his retirement, he has published many of his findings in book form, along with research he has conducted since he set up the Centre for Security Studies in 1993.

Escalante says one anti-Castro exile and former CIA operative who may hold clues to the JFK assassination is Luis Posada Carriles, who lives in Miami and is wanted in Cuba on charges of masterminding the 1976 bombing of a Cubana Airlines jet which killed 73 people.

Posada Carriles is also accused of involvement in a 1997 wave of hotel bombings, which were aimed at destabilizing Cuba and scaring away tourists, but Escalante doubts the U.S. government will deport him to Cuba to face trial.

"He has a life insurance policy, which is what he knows about the Kennedy plot," Escalante said.

"He and (fellow exile) Orlando Bosch were in the thick of the Kennedy plot. Remember, both he and Posada were part of this terrorist mechanism set up in New Orleans, which is where the plot was hatched to assassinate Kennedy."

Now 69, Escalante was just 18 when a revolution led by Fidel Castro took power in 1959. In the next few years, he and other young novices built up a counter-intelligence service from scratch.

He was invited to participate in the Spanish crime-writing festival because organizers say fiction falls short of a world Escalante has uncovered, in which the CIA plotted to make Castro's beard fall off or poison Cubans with infected coins.

Escalante belonged to the Q Section in 1961, which had 50 case officers to thwart the efforts of the so-called JMWAVE CIA base in Florida assigned to conduct sabotage operations in Cuba with a $100 million budget and 4,000 agents.

In his book "Executive Action," Escalante lists 634 conspiracies to kill Castro between 1959 and 2000, including 168 plots which may have succeeded.

However, a capsule containing botulin stuck to the side of the freezer compartment in the bar and broke when the agent tried to prise it loose.

Escalante says the Q Section often intercepted false documents sent by the CIA to their agents in Cuba, which were as good as genuine ones, so he used one for himself.

"Security measures for documents in those days were very lax. There was just ordinary paper, a photo, stamp and plastic cover. So that was how I began to drive, with a CIA license."

On chess table we have…Cuba was spanish colony…USA basicaly were glad that Cuba becomes independant from spanish kingdom and for historic past Kenedy never had intention get Cuba back to Spain…Russia helped Cuba to rest independant…killing JFK and accusing Oswald but executing him to block investigation, someone had inten tion push USA in war against SSSR. If we look for a spanish plan, similar to the failed killing of Woytila, when the turkish killer passed by Spain…LHO maybe had spanish observer contact! But who killed JFK should be shown on camera.